The president's former personal attorney, on the cusp of doing hard time in a penitentiary for lying to Congress, once again tells Congress his story 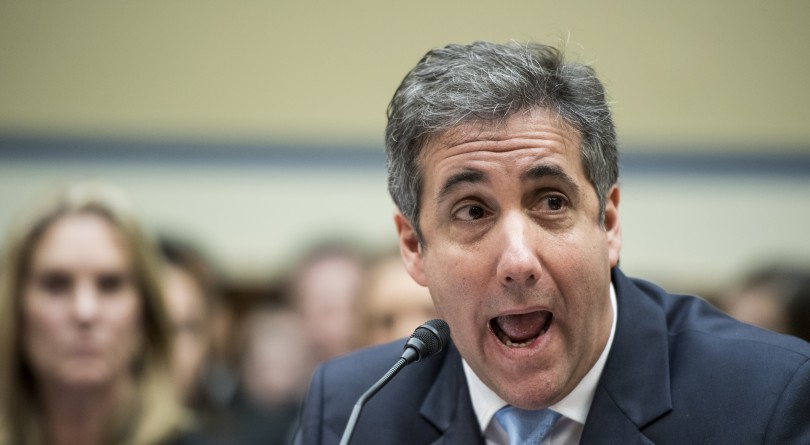 Start with a cheese omelet at dawn in the staff cafeteria in the basement of the United States Capitol—after all, it’s the most important meal of the day. The chef is a big man named O—–, cheerful and exuberant, piloting a hot grill on a cold morning.

“Are you going upstairs to watch Michael Cohen?” an early diner teases him.

“Gonna stay right here,” he answers. Then, suddenly, the banter gets more serious.

“Have you ever been in prison?” the cook is asked off-handedly, given the motif of the day. The reply is unexpected but unashamed.

So here was one man on his way out of jail on Wednesday, and another on his way in.

“Michael Cohen said he was willing to take a bullet for Donald Trump,” O—- said. “But when the Feds threatened him with some big jail time, he forgot about that bullet real quick.”

“Do you think Trump is going to jail someday, too?”

The chef pondered this. He said, “He gamed the system. He cheated the system through bankruptcy. He never shot or stabbed people, but he hurt people.”

“Trump is a criminal, but he’s a crafty criminal,” the big man said, and he handed over the eggs.

Upstairs, a dishevelled madness of cameramen, citizens, security and scribes, each of us propelled by his or her own ambition into the high, paneled room. The queue slithers down the corridors; officers bellow for order; august members of the House of Representatives— ingenious pols and ingenue Cortezes alike—shove their way through the February mob. These are the men and women of the Committee on Oversight, one of several bodies, now under Democratic Party control, whose ultimate aim is the impeachment, removal and incarceration of Donald Trump, should “high crimes and misdemeanors” be alleged and proved; also, reclaiming the White House and the Senate in 2020, and retaining them forever.

And why shouldn’t it be their goal? This is how the game has been played in the American capitol since the 1790s, and in London and Ottawa and Canberra, and in parliaments wherever there are free elections and competing parties and open competition for power, and not the dictates of a single Rocket Man or a hereditary emir or a bare-chested strongman on a steed.

Debate, dissent, documentation, and finally, legislation—this is how the sausage of democracy gets stuffed. But Wednesday’s hearing at Oversight proves to be more sideshow than salami-making, and ultimately offers very little that we didn’t know before.

Back to Washington. Michael Dean Cohen of New York City—confessed and convicted felon, tax cheat, liar and hush-money-launderer; Holocaust survivor’s son; Trump’s lawyer for a decade of penthouse celebrity and financial chicanery; now a sacrificial lamb facing three years in prison; a husband and father of two—comes to Congress for the second of three days of closed and open testimony. Thirty hours of revelation and spin, in total—juvenile bickering—choked-back tears—self-serving show-and-tell—and great daytime TV.

It is Cohen’s last public performance before the curtain falls; his next audience—and a captive audience it will be, beginning May 6—will have names like El Chapo and Sammy the Bull. Then will come the book, the movie, the redemptive afterlife.

“What would you call yourself?” one of the Republican inquisitors demands of the witness, halfway through a long, long day, summarizing the whole affair.

And what is Donald Trump?

“You have admitted lying to Congress, to this very body,” reminds the Democratic chairman. “Do you, Mister Cohen, recognize the gravity of your offences? You are a lawyer…”

Michael Cohen (interrupting, sadly, voice breaking): “As of yesterday, I am no longer a lawyer.”

Condensed to its nub, it is a day of alternate contrition and combativeness by the witness, bloodless probing by the Democrats, and indignant badgering by the Republicans, culminating in the posting by the all-white and (except for one woman) all-male minority of a poster with a photograph of Michael Cohen and the words LIAR, LIAR PANTS ON FIRE. Nothing is divulged that might advance impeachment. Everything that Cohen admits confirms his crimes of commission and his fatal 10 years of fealty at the right hand of Donald J. Trump.

“Every day, we came in and knew we were going to lie for him on something, and that became the new norm,” Cohen says. “And that’s exactly what’s happening now in this country.”

“He doesn’t ask you questions, he speaks in code,” the disbarred attorney continues, “and I understood the code.”

“What is the truth he fears most?” a Freedom Caucus right-winger probes, but to this Michel Cohen has no answer.

Cohen has come equipped with Xeroxes of cheques signed by the president to buy the silence of the ecdysiast Stormy Daniels, and of financial statements that verify what The Donald always has proudly boasted—that his net worth rises and falls according to his own whims and predilections. In 2011, according to Cohen’s facsimiles, Trump claimed a personal wealth of $4,597,000,000. Two years later, he added a round four billion as “Brand Value”—four billion phantasmagorical dollars!—and claimed he was worth more than nine big ones. But when the IRS came calling, as in the old Creedence Clearwater Revival song about the rich boy who doesn’t want to fight in ‘Nam (sound familiar?), The Donald’s house looked like a rummage sale.

“Is there a love child?” asks a woman from the Democratic side, getting down to business.

He has a hundred recordings of conversations with Trump, Cohen admits. He will remit them to the Committee on Oversight if they so desire.

“We do!” the chairman instantly snaps.

“Donald Trump is a man who ran for office to make his brand great, not to make our country great,” Cohen deposes. “He had no desire or intention to lead this nation—only to market himself and to build his wealth and power. Mr. Trump would often say, this campaign was going to be the ‘greatest infomercial in political history.’

Yet no one worked harder to build that brand than lawyer Michael Cohen. In fact, Cohen testifies, it was he, not The Donald, who first advanced the idea of a Trumpian presidential bid, way back in 2011. (Actually, Trump had been flirting with a campaign for the Oval Office for decades; just skim his old bestsellers.)

Now another flash card is posted by the Republicans:

“Cohen’s consciousness of wrongdoing is fleeting … his remorse is minimal … his instinct to blame others is wrong.”

What made the worm turn? Cohen is asked. (Or “rat,” as Trump has tweeted of his erstwhile BFF.)

“Helsinki, Charlottesville … the destruction of society,” he responds.

“I made mistakes. I own them,” Michael Cohen says more than once.

“What warning would you give young people?”

“Look what happened to me.”

We are four hours in when a congressman and former police officer from Louisiana—a man once labelled “the Cajun John Wayne”—gets his turn. (This is Rep. Clay Higgins, a man whose wife’s nickname is “Stormy,” according to his Congressional biography.)

“A man’s mouth is his destruction and his lips are the snare of his soul,” Rep. Higgins says, quoting Proverbs 18:7.

“I’ve arrested ten thousand men,” Mr. Higgins continues, “and you’re just like them. You’re just the one that’s in the trap right now, and you’re trying to get out of it.”

It is a trap that, Micheal Cohen avers, soon may engulf the republic itself.

“I fear that if he loses the election in 2020 that there will never be a peaceful transition of power,” the liar and ex-lawyer says, raising the spectre of an American coup d’etat, a president chaining himself to the West Wing Colonnade as the moving vans roll in with Joe Biden’s furniture—the same president for whom Michael Dean Cohen once volunteered to absorb a gunshot.

It is a chilling prophesy, one that Cohen will not be free to see fulfilled—in 2020, he’ll be in a cell. Meanwhile, across the Pacific, Donald Trump lies sleeping, presumably alone.