AT THE WHITE HOUSE 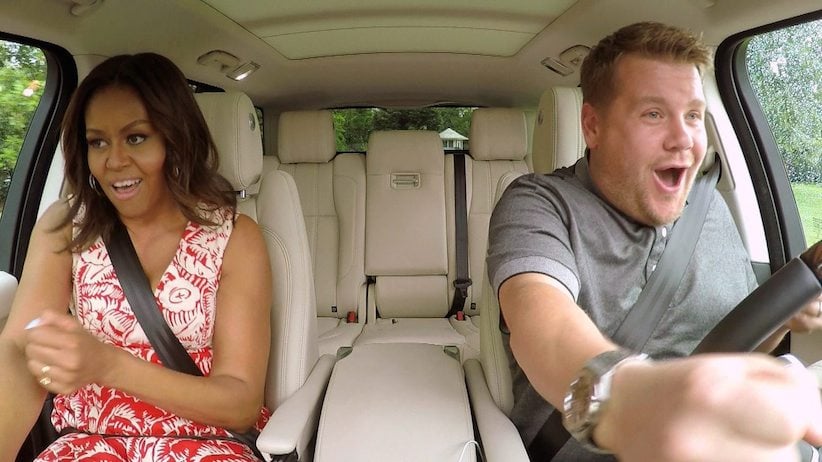 In this undated image released by CBS, first lady Michelle Obama, left, and James Corden, host of “The Late Late Show with James Corden,” appear during the taping of a Carpool Karaoke segment which will air on the late night talk show on Wednesday, July 20, 2016. (CBS via AP)

NEW YORK — It was a musical joyride for Michelle Obama as she joined James Corden for a “Carpool Karaoke” session that aired Wednesday on the late-night host’s CBS show.

The first lady and Corden didn’t go far — security demanded that they stick to the driveway on the White House property. But that didn’t mean they couldn’t belt out Stevie Wonder’s “Signed, Sealed, Delivered I’m Yours” and Beyonce’s “Single Ladies (Put a Ring on It).”

Then it was time for “This Is For My Girls,” a “girl power anthem” intended to promote full access to education worldwide. And to join them for it, up popped Missy Elliott in Corden’s backseat.

It was produced by AOL’s MAKERS, a women’s leadership platform, and was released in March after the first lady spoke at the South by Southwest festival in Texas. It benefits Let Girls Learn, an initiative launched last year by the first lady and President Barack Obama to address the barriers that keep more than 62 million girls around the world out of school.

“So much could be corrected in the world if girls were educated and had power over their lives,” the first lady told Corden between tunes. “My message to kids here is, don’t take your education for granted.”

“When was the last time you got to do this, have a good rock out in the car?” Corden asked.

Just once in 7 1/2 years, the first lady replied — when older daughter Malia was learning to drive.

“This is a real treat!” she declared.