Missing Barack Obama, and his long, hard march toward change

The 44th president's speech in Montreal was no mere swipe at his successor. It was a reminder of how tough real political leadership is. 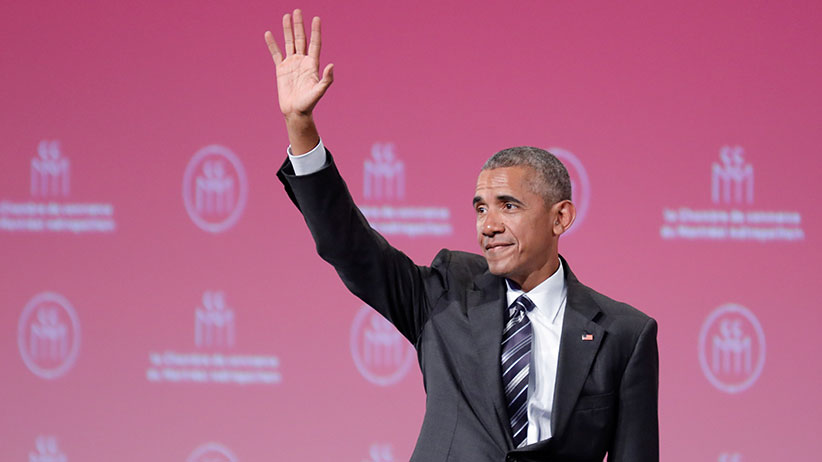 There stood Barack Obama in Montreal, a U.S. president as most of us had long come to understand the role: standing tall but with relaxed shoulders, bracketed by two glass teleprompters that helped him confine his remarks mainly to the words they spilled forth, talking about trade and free press and religious tolerance as if they were actually worthwhile attributes of modern society.

There was also something nostalgia-inducing in his ideas about time and pacing—and not just in 44th president’s trademark pauses for dramatic effect, which Trump has mostly replaced with swift, sniffling intakes of air.

Rather, it was a less obvious trademark of the Obama presidency: the idea of political change as a project that is always difficult, that requires patience and time.

The current man in the job is forever promising sweeping fixes that will be “so easy, believe me” and come “so fast they’ll make your head spin,” as only a braggart outsider can really do. Enough Americans were so angry they craved and were seduced by the notion of Trump’s simple solutions. In the last international address he had delivered before departing the White House, in Peru in November, Obama had rebuked this charlatan-like offer. “If these issues were easy—if ensuring prosperity, jobs, security, good foreign relations with other countries—if all that was simple, then it would have been done. By every previous president,” he said.

Here’s how Obama described the imperatives of keeping the globe stable in his next international speech, which he made Tuesday to the Montreal Board of Trade:

The bottom line is: democracy is hard and progress doesn’t always move in a straight line, and its gains are fragile if we as citizens are not tilling the soil and maintaining that democracy. But having said that, the good news is I am convinced the future does not belong to strongmen.

He returned repeatedly in his speech to the need for patience in diplomacy and reform; to the wisdom of careful adaptation to economic and societal shifts, and to the benefits of such diligent efforts in the past. “Terrorism will not be defeated overnight,” he said, contrary to Donald Trump’s bid to rapidly crush ISIS. The values-driven international order of institutions like the United Nations, NATO and the International Monetary Fund, he said, improved global life expectancy and averted another world war “steadily over the course of 70 years.”

Here’s how he described the merits of international development funding, for which his successor sees little use in an America First world:

Making sure that fragile states do not collapse in the first place; helping emerging economies become markets for our goods: it’s not just charity. It’s the smart thing to do and ultimately will be good for businesses here in Canada and the United States. (emphasis mine)

Climate change action is, of course, the ultimate political long play. The most disastrous effects of submerged coastal cities and drought disasters will take decades or generations to materialize, and the sacrifices and taxes called for today can at best effect modest and incremental mitigations of the slow-gathering crisis. In Montreal, Obama took a patient posture with Trump’s withdrawal from the Paris accord, which he described as“an agreement that even with the temporary absence of the American leadership will still give our children a fighting chance.”

It’s fairly typical for a retired president to adopt the long view once he’s left behind the daily intelligence briefings, the nuclear codes and the necessary pre-occupation with approval ratings. For Obama, however, the politics of slow and difficult have always been central in his thinking. He emerged on the national scene in 2004 with a pledge to ease divisions between red and blue states, making no pretence of it being a quick win. His stirring “Yes, we can” speech after a 2008 primary loss in New Hampshire evoked the continuation of the long, Sisyphean ascent towards a better future.

Consider what his health-care reforms now reap, despite politically wounding the party in the 2010 congressional midterms and ever since: this spring polls showed it finally winning approval of a majority of Americans, and the Republicans’ attempts to strip millions of their insurance coverage or resume allowing surcharges or insurance denial for pre-existing conditions show how in the seven years of Obamacare, its benefits have become publicly viewed as entitlements that shouldn’t be denied. And on climate change, the fraction of Americans who were seriously concerned about the warming planet with Al Gore’s An Inconvenient Truth a decade ago has now become a critical mass: a mere 32 per cent of the public are on board with Trump’s middle finger to the Paris climate pact.

The goals and ambitions of a patient president stretch longer than two four-year terms, and there was never a guarantee the next president would carry forth Obama’s torch. Trump certainly didn’t–patience and populism are seldom bedfellows. Hillary Clinton wasn’t necessarily a perfect continuation of his multilateralist agenda, either, but she would have at least continued the seven-decade international order the United States helped maintain.

There are corners of the U.S. voting public where the what-have-you-done-for-me-yesterday mentality prevails; it includes Trump’s base, and its membership miscontrues the improving economy as his doing. Trump has proven, though, that nobody can quickly overhaul international trade, solve the Israel-Palestine conflict, wipe out a borderless terrorism movement, or bring back American coal mining and manufacturing.

But there are things Trump has proven can be quick and easy: destabilizing the planet. The oil-producing Arab world’s compact is crumbling with the isolation of Qatar; the rest of the NATO alliance is unsure where to turn; North Korea is provoking with near-weekly missile tests,{recast} and Canada is now unsure whether its reliance on its massive neighbour is worth it. Holding everything together is a long, hard journey. Messing it all up can take a matter of a few weeks, and a few tweets.