Mourning in America: Gazing forward on a day of remembrance

On Veterans' Day, Americans looked toward a new country under president-elect Donald Trump 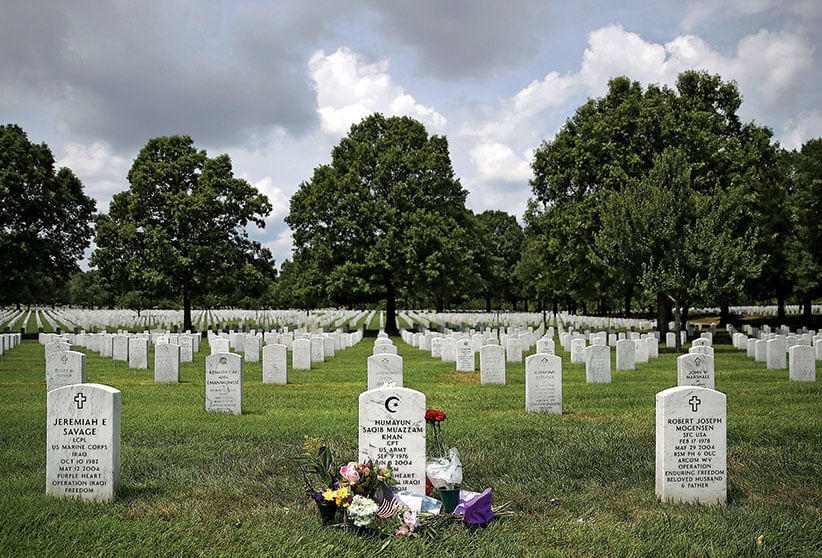 The 11th hour of the 11th day of the 11th month came three sunrises after planet Earth collided with comet Trump. At Arlington National Cemetery in Virginia, only the dead lay unshaken.

On a consecrated hilltop, a harmless cannon boomed, saluting the outgoing president who had come to lay a wreath at the Tomb of the Unknown Soldier on Veterans Day. “The American instinct has never been to find isolation in opposite corners,” Barack Obama said. “It is to find strength in our common creed.”

Lower, closer to the Potomac River in Section 60 of this vast, sad pasture of the fallen, a family from tiny Homerville, Ga.—the Lamies, Linda and Eugene—spread a blanket in front of the tombstone marking the resting place of their son Gene. Then they began to decorate the headstone with Christmas baubles and a halo of pine.

“We do this every year,” said, Linda, whose son’s life had been ended by an improvised explosive device in Iraq in July 2007, when George W. Bush was commander-in-chief. Sgt. Lamie of the 3rd Infantry Division was 25. He left a wife and two children.

“He was part of the surge,” the hero’s mother noted. “There are a lot of them here from that time.” She said that the couple’s other son, John, had also been in Iraq, and also had been wounded, and that “he came home with all his appendages but he has the PTSD and the TBI [traumatic brain injury].”

The Lamies are white people. It still seems necessary for a reporter to mention the race of everyone he talks to in this country.

“What are your thoughts about what happened on Tuesday?” a wanderer, barging in, asked the mourners about the surprise victory of president-elect Donald Trump.

MORE: How Donald Trump won the race to become president-elect

Two rows away, bathed in ﬂowers and sunlight, was the grave of Humayun Saqib Muazzam Khan. Until one night in July, Capt. Khan’s hard-earned rest at Arlington would have been no less tragic for being little known. After all, in the same quadrant were the tombs of another Muslim named Ayman Abdelrahman Taha and a Buddhist named Chanawongse and a Jew named Bruckenthal and Christians called Stubenhofer and Engeldrum and Muralles and Lapinski and Le. An icon etched into the tombstone conferred each soldier’s religion, but several of the freshest graves in Section 60 bore no icon of faith in a god or gods at all.

“There’s everything out here from nothing to paganism,” Linda said. “But any soldier respects the position of the president, whoever it is. Even if Hillary had won, they would have respected her.”

Capt. Khan was the fallen warrior whose parents waved a copy of the U.S. Constitution at the Democratic National Convention on Hillary Clinton’s behalf. It was Khan who, in 2004, had rushed forward to protect his comrades from a human bomb in a suicide taxi.

“Have you ever been to Arlington Cemetery?” Capt. Khan’s father, Khizr, demanded of Trump, that sweltering, chilling night in Philadelphia. “Go look at the graves of brave patriots who died defending the United States of America. You will see all faiths, genders, and ethnicities. You have sacrificed nothing —and no one!” 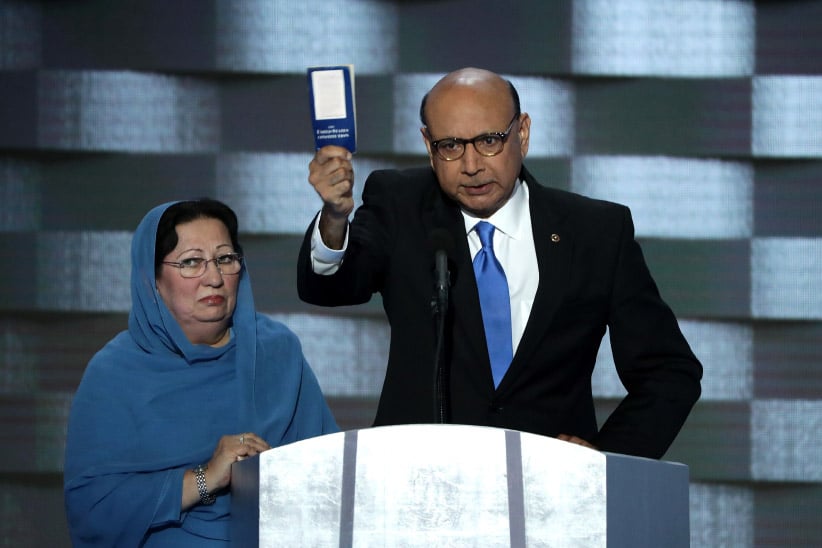 Khizr Khan, father of deceased Muslim U.S. Soldier Humayun S. M. Khan, holds up a booklet of the US Constitution as he delivers remarks on the fourth day of the Democratic National Convention. (Alex Wong/Getty Images)

Trump had the Lamies of Homerville on his side, and tens of millions more. (Trump won Clinch County, Ga., by 70 per cent to 28.) “I don’t think it’s appropriate for Gold Star Families to use that for political purposes,” Linda stated now at Arlington, looking toward Capt. Khan’s stone. “If their son was alive, he would have voted the way he wanted to. I would speak of his service, his memory, his children. But not of his politics.”

“God made us all different,” said a Maryland woman named Laura Benkert. She had come to Sgt. Lamie’s grave with her boyfriend, who had served in the 3rd Infantry Division alongside the warrior sleeping beneath their feet. “War is about those differences. I think the Khans are in pain. I think people handle pain in different ways. If we respected that in each other, maybe there wouldn’t be any wars.”

“Satan is now in the White House,” someone had scrawled on the wall at the U Street Metro station in Washington, but whether this was freshly written or a relic from Richard Nixon’s time, it was impossible to say.

Upstairs was the famous purveyor of hamburgers and heartburn called Ben’s Chili Bowl, and on one side of the building was a mural depicting two men—the only two men—who have been granted the privilege of eating for free at Ben’s for the rest of their lives: Barack Obama and Bill Cosby.

Inside Ben’s, nothing had changed, and everything had. Eight years ago, diners had surged from the Chili Bowl and the taverns of U Street to joyously, raucously hail the election of the first black president. Eight years later, in D.C. no one danced. Donald Trump received only 11,000 votes in the district out of more than a quarter-million.

An African-American man named Jerry Coleman was sitting at the counter, eating a “half-smoke” sausage with fries.

“Do you think Donald Trump is Satan?” Coleman was asked.

“No,” he replied. “Actually, the worst Satans are in Congress.”

“Trump’s a fool,” he went on. “If he does what he promised to do in the first 100 days, he might get impeached before they’re over.” 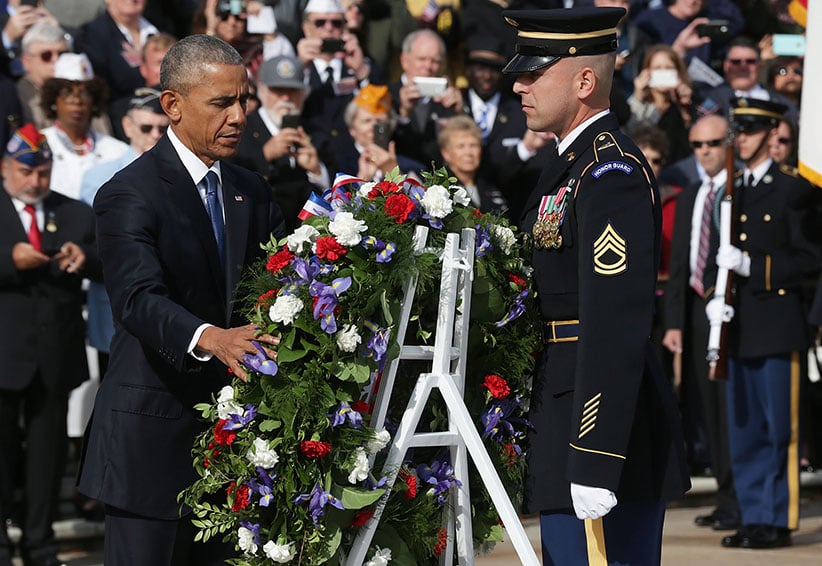 U.S. President Barack Obama participates in a wreath-laying ceremony at the Tomb of the Unknown Soldier at Arlington National Cemetery on Veterans Day November 11, 2016 in Arlington, Virginia. The annual Veterans Day National Ceremony was held at the cemetery to honour Americans who had served in the U.S. Armed Forces. (Alex Wong/Getty Images)

Coleman said that he worked as a speech therapist in the public schools of Petersburg, Va. Petersburg was the city where, in 1864, Union Army engineers dug secret tunnels under Confederate lines, wired them with explosives, lit the fuse, and then watched as their fellow Yankees were decimated when they tried to surge into the crater. (The disaster was re-enacted as the opening scene in the movie Cold Mountain.) Until Tuesday, many Americans believed that Trump was bound to blow a similar hole in the Republican Party.

“I guess all we can do now is wait and see,” Jerry Coleman sighed.

“Is there anything Trump has said that you agreed with?”

“Getting tough on immigration,” he answered. “It’s true that terrorists are coming across the border. But it doesn’t really matter. The homegrown ones are already here.”

Down the block from Ben’s Chili Bowl is a small museum that interprets the African-American role in the American Civil War. There, late on the afternoon of Nov. 11, the Muslim American Veterans Association was holding its annual ceremony of remembrance.

These were about 25 men of colour in the auditorium. Most of them had converted from Christianity to Islam decades ago, back in the heyday of Malcolm X and Elijah Muhammad and Muhammad Ali. None was from the Middle East. Two were older than 90.

Lyndon Bilal, who had grown up in Gary, Ind., and whose cousin had played in a band in that city with two or three of the Jackson 5, is the group’s national commander. Bilal had served in the United States Air Force with the rank of staff sergeant, had worked as an IT expert in the Pentagon for many years, and still owned a couple of very nice Donald Trump brand neckties. Now he had lived to see his country fall under the sway of a man who vowed to ban people of his faith from entering the land of their birth and life and service.

“I guess I could give you the religious line and say that everything is God’s will and not a mistake,” Bilal was saying. “But the truth is that Donald Trump does not represent the values that this country was built on. It’s just the lies, the inconsistency, the disrespect for women. They expect us to forget about it after the election, but there is a fear that things in society are going to get worse before they get better.”

“When I hear him talking about making America great again, I hear him speaking in code. To me, he is saying he wants to take it back to a time when his forefathers had more say-so. It’s not a respect for other people. It’s a take-what-you-can-get, rape-and-pillage attitude.” 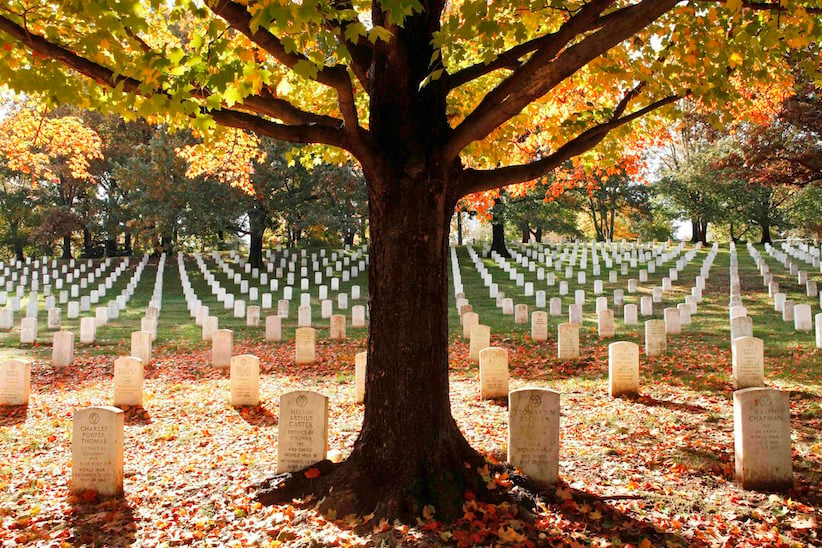 A slender man in a colourful skullcap was in the queue to speak. This was a Baltimorean named Mutee Mulazim, who said that he had found Islam 44 years ago, “after a long search.”

At this little museum on Veterans Day, everything had come full circle. It was Mulazim who, back in 2004, had said the Salat al-Janazah, the Muslim funeral prayer, to consecrate the body and the sacrifice of Capt. Khan of the 201st Forward Support Battalion, the man who now lay under the star and crescent at Arlington, across the grey Potomac.

“Barack Obama was a symbol that the old world order is ending,” Mulazim said. “Everything is changing. I can look at my phone and someone in Africa can look at his phone and see me at the same time. We are moving in the direction that greed is not going to be the deciding factor anymore.”

“I am not surprised by Donald Trump,” he went on. “He tapped into the group of people who feel that they have been overlooked. He was already a star, and people follow a star. He will not do all he says. Who is he going to lock up—the Muslim doctor? The Muslim lawyer?”

Mulazim said that he had made the hajj to Mecca and that he had travelled to many Middle Eastern countries on behalf of the State Department as an emblem of American pluralism and tolerance.

“Scripturally and philosophically, it’s the end of a great era of the planet that we live on,” said Mulazim.

Then everyone bowed his head in prayer, and the Muslims sang America The Beautiful.