Trudeau gets his turn to recast the Canada-U.S. relationship

Paul Wells on what to watch in Washington 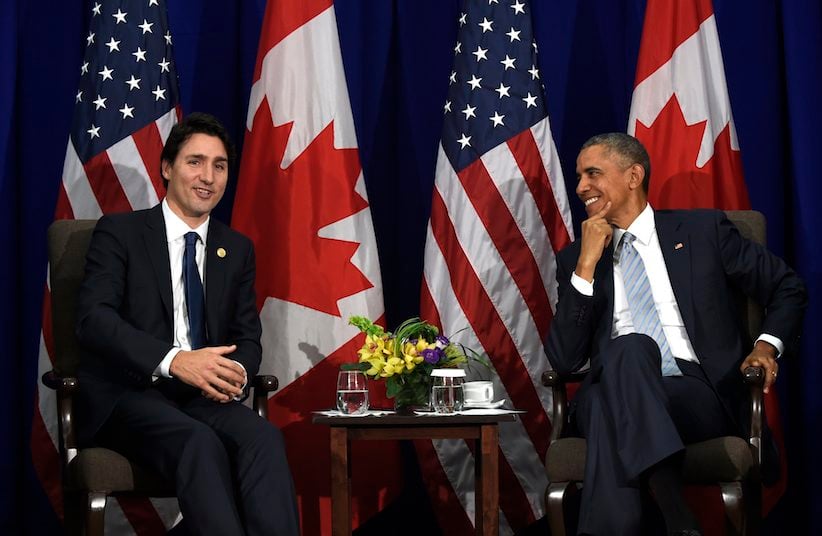 In Washington, appearances can be deceiving. When Jean Chrétien visited George W. Bush’s White House on Feb. 5, 2001, an observer would have been forgiven for spotting signs of a formidable new era in Canada-U.S. relations. Dick Cheney, Colin Powell, Condoleezza Rice, White House chief of staff Andy Card and U.S. trade representative Bob Zoellick were on hand. When Chrétien’s foreign minister, John Manley, and Chrétien’s main foreign-policy adviser, Claude Laverdure, lingered after the meeting and missed the Canadian motorcade’s departure, they found themselves briefly entertained by a sweatshirt-clad, cigar-chomping Bush until another ride could come to take them away.

It was at once a high-calibre and a down-home greeting. But even though Chrétien and Bush remained on decent personal terms long afterward—Laverdure would recall later that they could always build a conversation around baseball gossip, even after other subjects became tense—their divergences on Bush’s Iraq war eventually poisoned the whole relationship.

Related from Wells: Trudeau’s ISIS policy gets an assist from Obama—and Harper

Perhaps Stephen Harper and Barack Obama had no realistic hope of a better relationship, stranded as they were, like Bush and Chrétien, on opposite sides of an ideological fence. But Harper blew his opening hand, preparing no substantive agenda for Obama’s first Ottawa visit on Feb. 19, 2009. There was a tour of the Centre Block and some handshaking at a Byward Market bakery. A President struggling with a global financial crisis and a historic expansion of health-insurance coverage left Ottawa with the impression that nothing pressing needed his attention there. When the environmental lobby captured his attention on Keystone XL, there was no strong north-south relationship to restrain him from listening to them.

On Wednesday, Justin Trudeau gets his turn to recast the Canada-U.S. relationship. He has advantages: an ideologically compatible president, the first time a Liberal has met with a Democrat since Chrétien and Bill Clinton were leading their governments; the pomp of a full-blown state dinner, only the ninth of the Obama presidency and the first any president has thrown for a Canadian in 19 years. But the timing is not ideal: Obama is nearing the end of his presidency, and the bizarre presidential primary season has thrown doubt on the future, not only of Canada-U.S. relations but of all U.S. politics, after Obama leaves office.

Like Chrétien, Trudeau is relying on his team to make an impact beyond his one-on-one relationship with Obama. Environment Minister Catherine McKenna, Defence Minister Harjit Sajjan and Trade Minister Chrystia Freeland are among the five cabinet members who’ll travel with Trudeau for the duration of the visit. Freeland probably knows more people in Washington than any of them; as a foreign correspondent for Reuters and the Financial Times before her political career, she was a regular on the U.S. political talk-show circuit.

The Canadian delegation’s goal will be to build relationships across the administration that will last well past this week, and could even last into the next presidency, at least if a Democrat wins in November. One previous encounter has already gotten the new Trudeau government noticed in Obama’s Washington. “The climate relationship with Canada really just ramped up dramatically quickly” after Trudeau’s election, Todd Stern, the U.S. special envoy for climate change, told reporters on a conference call yesterday. “The Canadians in Paris [at the COP21 climate conference] were extraordinarily effective … They made a very positive splash. We will be working with them in a number of bilateral efforts as well as multilateral.”