'Myth busting' Obama tries to debunk GOP on the economy

'The primary story that Republicans have been telling about the economy is not supported by the facts.' 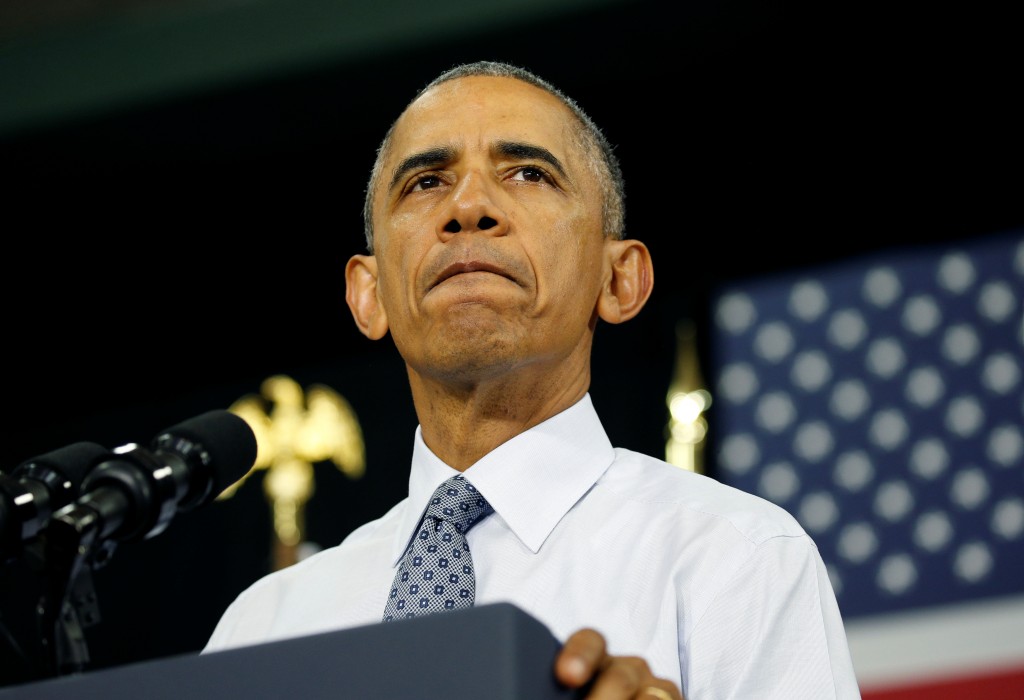 ELKHART, Ind. – President Barack Obama went on a “myth-busting” mission Wednesday aimed at undermining Republican arguments about the economy, working to give cover to Democrats to embrace his policies ahead of the presidential election.

Officially, Obama came to this hardscrabble town in northern Indiana to illustrate how steps he took in the first days of his presidency had ultimately paid off and pulled the economy back from the brink. Yet his rally at a high school in Elkhart blurred the lines between governing and campaigning, marking the president’s most aggressive and direct foray to date into the roaring campaign to replace him.

When Obama came to Elkhart seven years ago on his first major presidential trip, the unemployment rate was soaring and the White House struggling to secure support for injecting hundreds of billions of federal dollars into the economy. Though the economy has improved measurably, Republicans have been reluctant to give Obama credit.

As Obama returned to Indiana, GOP Gov. Mike Pence said the state had recovered “in spite of Obama’s policies” – not because of them. And the Republican National Committee dismissed his visit as a “campaign trip” designed to help Hillary Clinton sell a weak Obama record as if it were “really a success story.”

So with all the vigour he displayed on the campaign trail years ago, Obama attempted a nearly line-by-line takedown of claims Republicans have made about his policies holding the economy back. He dismissed those GOP voices as “anti-government, anti-immigrant, anti-trade and let’s face it, anti-change.”

He avoided mentioning Donald Trump by name, but was met with shouts of “Donald’s crazy” from some of the 2,000 people packed in a brightly lit gymnasium. Asked later why he rarely mentions Trump’s name, Obama said the businessman is better at marketing himself than the Democratic candidates.

“You know he seems to do a good job mentioning his own name,” Obama said in a town hall meeting hosted by “PBS NewsHour.” ”So, you know, I figured I’ll let him do his advertising.“

Republicans have mostly settled on Trump as their nominee, albeit begrudgingly, while Clinton and Bernie Sanders continue competing for the Democratic nomination. Though White House aides are eager to see the primary wrapped up, Obama has tried to avoid showing favouritism, which has limited his ability to engage in the campaign.

Obama predicted that his party’s primary was “almost over” and said he’d have plenty of time to campaign for the nominee. He said the Democratic contender should be clear by next week, following June 7 primaries in California, New Jersey and elsewhere.

He also offered a few subtle nods of approval for the Democrats. Obama praised Clinton’s husband, former President Bill Clinton, for cutting federal deficits, and railed against a system rigged for the uber-rich in an implicit embrace of Sanders’ campaign mantra.

The president’s approval ratings have finally improved to levels where his fellow Democrats feel comfortable running on his policies, especially on the economy. Clinton has proposed steps that build directly on Obama’s actions while Sanders has praised his accomplishments.

Yet Obama and his aides have long signalled frustration that as the economy has improved, the public’s perception of his decision-making hasn’t tracked the same trajectory. Opposition to the president has been particularly unrelenting in conservative stretches of the Midwest like Indiana, which Obama won in 2008 but lost decisively four years later.

Elkhart County Commissioner Mike Yoder, a Republican, paused for 15 seconds and laughed when asked whether Obama deserved any credit for the recovery.

“At the bottom of the day, I think most elected officials – and I’m guessing the president would say this himself – that it is the local communities and the local businesses and workers that really are the major reason that a community will turn around,” Yoder said.

Obama said he had returned to Elkhart “precisely because this county votes Republican.”

“I definitely got whupped here in 2012. I know I don’t poll all that well in this county,” Obama said. “So I’m not here looking for votes.”