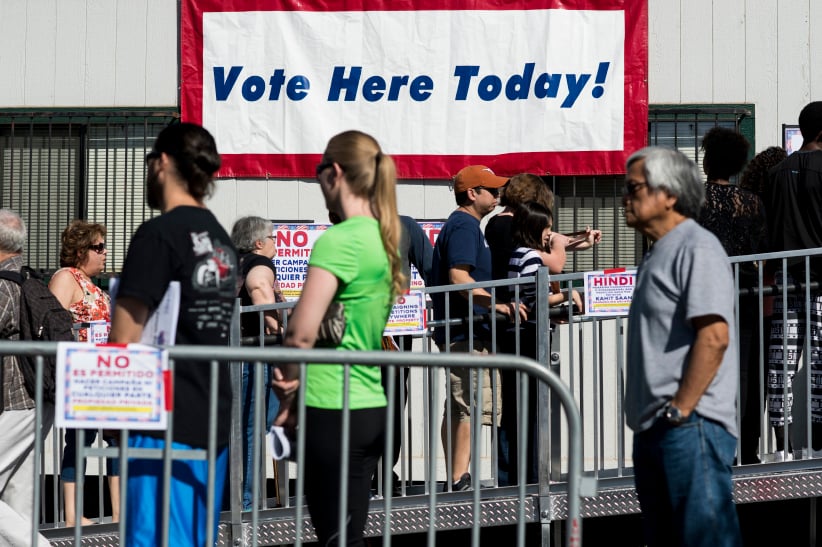 Voters line up at a temporary voting location in a trailer in the Arroyo Market Square shopping center in Las Vegas. (Bill Clark/CQ Roll Call/Getty Images)

MIAMI — On the first day she was eligible to vote as a new American citizen, Nancy Osores left home before her pizzeria shift, got on a bus and rode it to a place in her new country’s political history.

She joined a wave.

An unprecedented number of Latinos are voting in this election, casting early ballots with an enthusiasm that could sink the presidential hopes of Republicans in the must-win, always-close state of Florida.

Early in-person voting has more than doubled among Latinos in that state, as people like Osores, a Peruvian-born grandmother, rush to cast ballots against the man who’s stirred new passions for civic participation.

She cut off a question about Donald Trump.

“The racism. The sexism.”

Osores came to the U.S. to join her daughter in 2000. On the first day of early voting two weeks ago, the new U.S. citizen went to a union-organized gathering point, hopped on the psychedelic-painted “Love Bus,” and rode to a Miami municipal building.

She waited in line a half-hour before voting for Democrats up and down the ticket. As she walked out, she offered a thumbs up.

Florida political science professor Dan Smith calculates there’s been a 152-per-cent increase in early Latino turnout from this stage in 2012. Steve Schale, a former state director for Obama, said he believes it could save the party from a post-Obama decline in African-American turnout.

More than two million new people have become citizens since the last election. Democrats are also aided by younger Cubans who lean farther left than previous generations, and an influx of Puerto Ricans who are already eligible to vote as U.S. citizens.

One organizer says the Puerto Ricans he met were desperate to get on voter rolls when they heard Trump trash-talk Mexicans. Esteban Garces figures his group has helped register 33,000 new voters. His group Mi Familia Vota also provides workshops to help people apply for citizenship.

At the last workshop, he asked the 112 attendees whether this specific campaign pushed them to seek citizenship.

Another group reports the same phenomenon.

Magaly Alvarado of Hispanic Unity says 3,000 people have gone through citizenship clinics in Broward county this year — more than double the 2012 total.

“A candidate like Donald Trump saying they are rapists, they are drug-traffickers, they are bad people ± (people) are saying, ‘You know what? We have to support our community.”’

New citizens work to turn out other new citizens.

Argentina-born Thomas Kennedy arrived here without papers in 2000, when he visited family and overstayed a visa. He married his girlfriend 11 years later, got residency, and received his citizenship this year.

Now he’s a union organizer and has been doing registration and voter-turnout since January. He’s heard from numerous people like an elderly woman from Nicaragua, a longtime resident who finally applied for citizenship to vote.

“This guy took it too far… It’s my pleasure to be able to cast a ballot against a bigot like Trump.”

Nearby, Diane Guerrero of the Netflix hit “Orange Is The New Black,” who dropped by the union local to lend a hand, was busy calling voters.

Guerrero made headlines for a tearful TV interview where she revealed her parents were deported. She arrived home from school one day, found an empty house, and they were gone. Neighbours took care of her.

Her story used to fill her with shame. “It’s this feeling of unworthiness,” she said in an interview. “This feeling that you don’t belong… I thought I was alone.”

Now she’s speaking at college campuses, pushing for immigration form _ and for some respect: “I started accepting who I was… and saying, ‘Wait a minute, I’m a good person. I have value.”’

The day she visited the union office, three dozen volunteers dropped by to knock on 500 Miami doors.

New-citizen stories also exist on the Republican side — albeit in fewer numbers.

Gary Robinson came here from England in 1983 and hasn’t voted for anyone since Margaret Thatcher. Until now.

He got his U.S. citizenship. He supported Brexit for his homeland, and believes political correctness is swamping Western culture _ with Islamists pushing sharia law and politicians too weak to push back.

“We’re probably over here, maybe five years behind England. But we’re gonna see it. You call a place in Michigan now and it’s, ‘Press Three for Arabic.’ It’s ludicrous… We’ve got softies as politicians. They mean well. But I believe they’re undermining the fabric of our society.”

He’s made his choice: “Trump motivated me to get citizenship.”