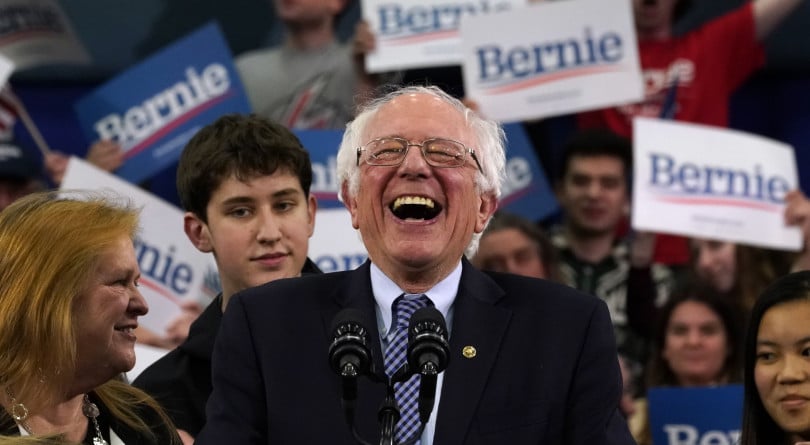 Democratic presidential hopeful Bernie Sanders speaks at a Primary Night event at the SNHU Field House in Manchester, New Hampshire on February 11, 2020. (Photo by Timothy A. Clary/AFP via Getty Images)

Sanders wins after a long election night in New Hampshire: Well, at least this time the votes actually got reported, but while the New Hampshire primary went more smoothly than its Iowa caucuses predecessor, the results were close enough that it was nearly time for the late-night talk-show jokes when it became possible to announce that Bernie Sanders was projected to win. However, because he was splitting the vote with several other candidates, he didn’t win a blowout victory the way he did in 2016 against Hillary Clinton: the second-place finisher, Pete Buttigieg, will wind up with the same number of pledged delegates under New Hampshire’s system, making the night effectively a tie despite Sanders’ popular-vote victory. The only other candidate to win delegates or get double-digit support was Amy Klobuchar, whose campaign has recently moved up to the major leagues.

Not such a big night for Biden and Warren: Two candidates who didn’t do well enough to receive any delegates were two people who were, at various points, regarded as frontrunners: Joe Biden and Elizabeth Warren spent the evening battling it out for a distant fourth. Anticipating another bad night, Biden had already moved onto South Carolina, and delivered a video message telling his supporters that he would win once the campaign moved on to less-white states like the Southern states and Nevada.

Warren gives a shout-out to Klobuchar: In her speech after the New Hampshire results started to come in, Warren allowed that Sanders and Buttigieg had had “strong nights,” but was effusive about another Senate colleague: “I also want to congratulate my friend and colleague Amy Klobuchar for showing just how wrong the pundits can be when they count a woman out.” Depending on where Warren’s campaign goes from here, the comment might be pointed to as the start of her comeback, or the moment when she started throwing support to a different candidate.

The end of the Yang Gang: One of the casualties of New Hampshire was the candidacy of Andrew Yang, who suspended his campaign after it became clear that he didn’t do well. “You know I am the math guy, and it is clear tonight from the numbers that we are not going to win this race.” Yang’s run, in which he stressed the need to prepare for a future of massive job loss due to automation, and didn’t shy away from occasional politically-incorrect jokes about his Asian-American identity, attracted supporters who didn’t identify with the Trump right or the liberal Democrats—but, it seems, not enough supporters. Last year, Michael Fraiman profiled the candidate for Maclean’s and explained his appeal:

He’s soaking up support from an unlikely coalition of socialists, libertarians, alt-right trolls, independents, disaffected Trump supporters and tech-savvy millennials who vote based on which candidate generates the dankest memes. They call themselves the Yang Gang. Elon Musk is a member, as are Tommy Chong, Nicolas Cage, Twitter CEO Jack Dorsey and YouTube star Casey Neistat.

I’m Spartacus, vote Bloomberg: Did Michael Bloomberg get the ultimate late-breaking endorsement from Hollywood legend Kirk Douglas? Douglas’s son Michael Douglas, a major Bloomberg supporter, told the candidate’s supporters that shortly before his father died last week at age 103, among his last words were: “Mike can get it done.”