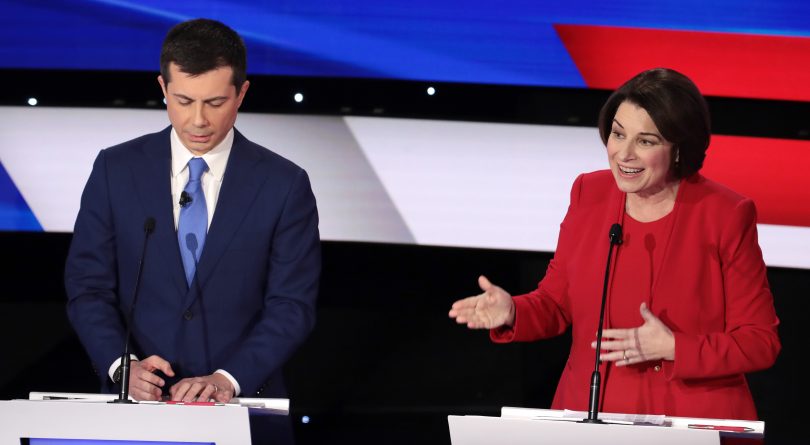 Welcome to a sneak peek of the Maclean’s Politics Insider: America 2020 newsletter. Sign-up here to get it delivered straight to your inbox.

“Lying dog-faced pony soldier”: Former Vice-President Joe Biden continues to lead the pack when it comes to expressions that no one uses anymore. No one thought he could top “no malarkey,” but at a town hall event in New Hampshire, an audience member asked him why he should be considered the frontrunner, and as part of his answer, he asked if she had ever been to a caucus before:

Despite the jesting tone, there were some questions in the media as to whether this was an appropriate thing to say, but most coverage was preoccupied with trying to figure out what the expression even meant. Biden has used this particular line on the campaign trail before, and his press secretary claimed it is from a John Wayne movie, but as of this writing, which movie remains unknown.

Buttigieg gets deficit fever: Remember back in the early 2010s when leaders all over the world were talking about deficit reduction, and then it turned out most voters don’t really care about that? Well, Pete Buttigieg says he cares. Speaking at a New Hampshire town hall, he said that although deficit reduction is “not fashionable in progressive circles,” the ballooning deficit under Trump is a problem and that Democrats have to “get a lot more comfortable owning this issue.” While arguing for deficit reduction doesn’t win many votes, it’s a way to establish Buttigieg’s bona fides as the fiscal moderate in the race, which could cause other fiscal moderates in the party to throw their weight behind him.

Klobuchar’s small surge: One candidate whose fortunes have improved lately is Minnesota Senator Amy Klobuchar. Though she appears to have only finished fifth in Iowa, her well-reviewed performance at a recent debate has helped to gain her new interest from moderates who aren’t sure Joe Biden can hack it: her appearances in New Hampshire are drawing bigger crowds, her fundraising has improved, and she’s gone up to no. 3 in the New Hampshire polling.

How Iowa happened: Remember the Iowa caucuses? That was a long time ago, last week. But as the New York Times discovered, the vote-tallying disaster wasn’t just caused by one malfunctioning app, but “cascading failures going back months” that implicate the way the caucuses were run at every level. There is even some connection to the 2016 Hillary Clinton/Bernie Sanders squeaker: despite the close finish, there was no way to have a recount because the caucuses didn’t actually report vote totals. So for 2020, there was an attempt to implement greater transparency in the vote-counting and reporting. That didn’t work out. But at least the new transparency rules allowed us to find out how everything went wrong.

How Trump won the digital campaign wars: A story by The Atlantic‘s McKay Coppins, “The Billion-Dollar Disinformation Campaign to Re-elect the President,” features a profile of one of the least-known but most important Trump people, his digital director Brad Parscale. Like many who joined Trump’s seemingly doomed presidential campaign, he was not an experienced election pro, but he became an expert at using Google and Facebook for “micro-targeting” ads to specific demographics. Micro-targeting worked to either to get voters excited about voting for Trump, or to dampen their enthusiasm for his opponents (“Hillary Thinks African-Americans Are Super Predators”). It’s expected to do the same in 2020, with an additional focus on getting stories into local news — because, unlike national news media, people actually believe what they hear from local news outlets.