They called each other names and questioned each other's fitness to be president. These moments crystallized a long, meandering debate. 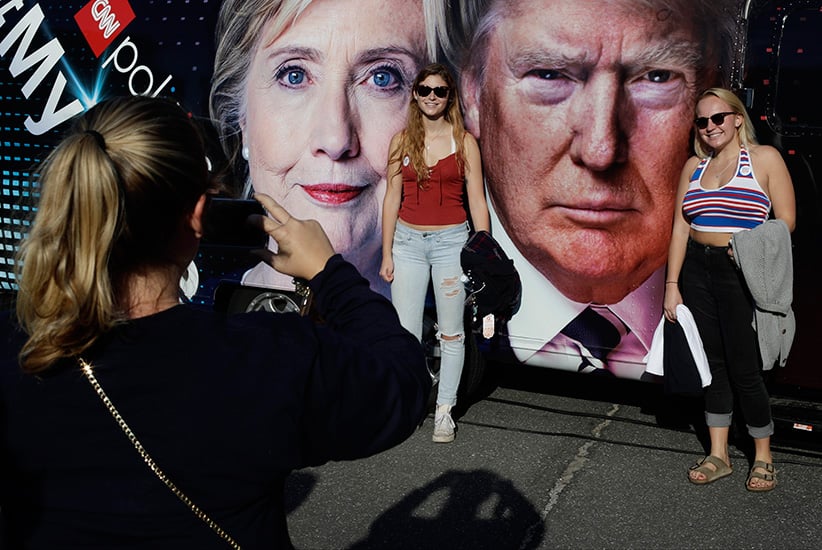 Here’s a look at the stand-out moments of the debate, and what they revealed about the candidates, their views of themselves and each other, and the swings of momentum throughout the evening.

Early on, Clinton harkened back to where the country was eight years ago, mired in the worst recession since the 1930s. “In fact, Donald was one of the people who rooted for the housing crisis,” she noted. Clinton paraphrased Trump rubbing his hands together in glee over how much money he would make when the bottom fell out—and then it did. Trump was, shall we say, not dismayed or shame-faced about this recollection. “That’s called business, by the way,” he intoned into his microphone.

Later, in a bizarre sequence, Clinton awkwardly touted her website as being eager to serve all your fact-checking needs—please call now! Operators are standing by! Trump, in turn, pivoted to chastising her for giving away her ISIS-fighting plan right there on the Internet. “See, you’re telling the enemy everything you want to do,” scolded the highly circumspect man who has definitely not been braying at the top of his lungs about his classified security briefings. “No wonder you’ve been fighting—no wonder you’ve been fighting ISIS your entire adult life.” Wait, what? Apparently Clinton heard the same cosmic record-scratch of confusion as the rest of us, because all she could do was beg the gods of accuracy to swoop out of the skies and enact swift red-pencil vengeance. “That’s a… that’s… go to the… please, the fact checkers, get to work,” she stammered helplessly.

Shortly after, Trump went on a lengthy rant about vast sums of money trapped outside the country because the President can’t sit at a table and make deals with rich people, and by the way, Clinton probably sucks at it, too. “I have a feeling that by the end of this evening, I’m going to be blamed for everything that’s ever happened,” Clinton said. It was one of the very few moments in the debate when she allowed herself a flash of unguarded exasperation, and, not coincidentally, one of her most humanizing and enjoyable. “Why not?” Trump drawled in response. “Why not? Yeah. Why not?” Clinton said, offering up a chuckle that was both utterly mirthless and the kind of laughter that starts and doesn’t stop for, oh, 15 minutes or so: the entirety of this lunatic election season compressed into one small guffaw.

A little later on, Clinton started in on Trump’s refusal to release his tax returns. She suggested some possible motivations: his Scrooge McDuck swimming pool of riches isn’t nearly as deep as he claims, he has some problematic financial bedfellows, or, maybe, it’s because he never pays federal income taxes. If it was intended by Clinton as a knockout punch, Trump sure didn’t hear it that way. He leaned into the microphone and murmured, “That makes me smart” in the same tone of voice with which you might inquire whether a particularly friendly retriever is indeed a good boy.

5. ‘Just listen to what you heard’

In a segment about race relations, Holt asked Trump why he spent five years claiming Barack Obama was not born in the United States. Trump asserted that the birther movement originated with Clinton’s 2008 presidential campaign, and again touted it as a success for which he could take credit. “When I got involved, I didn’t fail,” Trump said. “I got him to give the birth certificate.” What’s more, he continued, the first black President should actually be thanking him for being so benevolent in raising the issue and then clearing the air so there was no doubt about the thing he originally raised doubt about. “I think I did a great job and a great service, not only for the country but even for the President,” Trump said. When it was Clinton’s turn to respond, she drawled, “Just listen to what you heard.” The audience reflected on what they had just heard, and oh, they laughed.

The tranquilized mien Trump had maintained so far started to slip when moderator Lester Holt brought up the fact that he had initially supported the war in Iraq. The Republican candidate offered up a convoluted explanation of his various position statements, then demanded repeatedly that someone call Sean Hannity to back him up (it was a historic night in more than one sense, this being the first time a presidential candidate has opted for the phone-a-friend option in the middle of a debate). Then Trump did that curious thing people sometimes do, where they voluntarily shift the game to a playing field where they cannot possibly win. “I have much better judgment than she does,” he said. “I also have a much better temperament than she has.” The live audience, to its credit, laughed loudly. Clinton, to her credit, did not launch herself off the stage head-first. When Lester Holt returned the floor to Clinton, she didn’t even bother to refute what Trump had just said. “Whew!” she hooted, like someone cranking open a window and fanning the air after their oven caught fire. “Okay.”

7. ‘That line is getting a little bit old’

Later, in a discussion about U.S. nuclear policy, Clinton made the tragic mistake of trotting out one of her greatest hits as though it was a new release. “A man who can be provoked by a tweet should not have his fingers anywhere near the nuclear codes,” she said, looking just a wee bit too pleased with herself. “That line is getting a little bit old, I must say,” Trump sneered, and he was not wrong. “It’s a good one, though—well describes the problem,” Clinton retorted. But still: best to start workshopping some new material rather than risk beating one of your best zingers into a rotting horse carcass.

Clinton didn’t fare well in the first half of the debate; what she intended as knockout punches Trump instead revelled in as crafty business moves, and she sounded stilted and nervous trying to make a case for herself. But eventually she found her feet and a mode Trump could neither emulate nor combat effectively: that of the experienced stateswoman. When Trump offered a rambling answer about NATO and the need for America’s partners to earn the country’s help, Clinton offered a calm editorial aside before moving on to her next response. “Words matter,” she said. “Words matter when you run for president, and they really matter when you are president.”

9. ‘…doesn’t have a presidential look’

Toward the end of the debate, Lester Holt asked Trump to unpack his recent comment that Clinton “doesn’t have a presidential look.” Clinton turned toward Trump with a wide, beatific smile, waiting for his explanation. Trump insisted he was actually speaking about stamina, even as Holt read back his direct quote. “Well, as soon as he travels to 112 countries and negotiates a peace deal, a ceasefire, a release of dissidents, opening of new opportunities in nations around the world, or even spends 11 hours testifying in front of a congressional committee,” Clinton said. “He can talk to me about stamina.” It was her best moment of the evening, and the live audience rewarded her with, “Ohhhh!” leaving the subsequent “Snap!” left hanging in the air, unsaid.