North Korea, the Stanley Cup—so much winning in Washington

Allen Abel takes in the most joyous march on Washington in a quarter-century, while the U.S. president was making history of another kind in Singapore 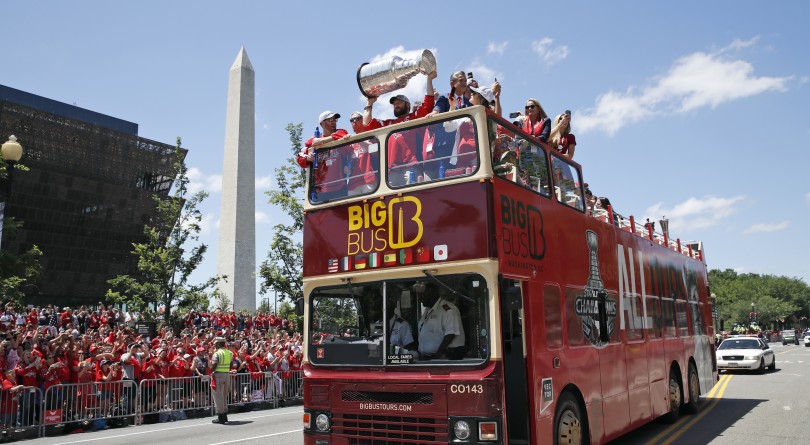 Alex Ovechkin of the NHL champions Washington Capitals holds up the Stanley Cup during a victory parade in front of the Smithsonian National Museum of African American History and Culture and the Washington Monument on June 12, 2018, in Washington, DC. (Photo by Alex Brandon-Pool/Getty Images)

“We’re going to win so much. You’re going to get tired of winning,” Donald Trump promised the forgotten working people of the United States—Washington, D.C. included—on the campaign trail in 2016, and here it all was coming true on Constitution Avenue on Tuesday morning, in the perfect June sunshine, around the corner from the Trump International Hotel, right in front of the Department of Justice—a big, loud, honking hockey parade, led by a Russian who was carrying a shining bowl imported from the hated G7 itself.

It was the most joyous march on Washington in a quarter-century, a horn-blowing, cacophonous contrast to the millions of foot-miles of anger and sorrow and protest that have been trekked down these same streets by men and, especially, by women in these recent weeks and months.

The trinket, of course, was Lord Stanley’s sainted Cup, claimed last week by the Washington Capitals for the first time in the team’s 45-year NHL history, while the 45th president himself was refueling at the same moment in the little U.S. territory of Guam, sailing home sleepless and silver-plated in self-imposed glory from his summit with North Korea’s Kim Jong-un.

Lining the route, cheering Alexander Ovechkin and Yevgeny Kuznetsov and their Canadian, American, Austrian, Swedish, Danish, Czech and German teammates, were tens of thousands of veteran hockey fans and latter-day bandwagon-leapers, roughly equal to the number of citizens of the Democratic Peoples Republic of Korea who are believed to be silenced in cells and lost to daylight in young Kim’s archipelago of fear.

Suddenly, it was not unthinkable that the next flag to adorn the light-poles along Constitution would be the red, white and blue of the unspeakable DPRK. Only hours earlier, this same star-spangled, blood-stained banner had been twinned with the Trumpian stars and stripes at a Singaporean hotel, each country’s leader visibly giddy with glee after months of twittery taunts and infantile put-downs, backed up with hydrogen bombs.

“He really wants to do a great job for North Korea. He’s de-nuking the whole place, and I think he’s going to start very quickly. He really wants to do something I think terrific for their country,” Trump said in Singapore of the former existential threat to mankind. “I do trust him. Yeah.” (Note to fans: Singapore may be equatorial but it is not ice-hockey-free. Its men’s national team never has lost to India, but it never has defeated Dubai.)

So now the people and politicians of Washington were left to wonder whether they could trust in Trump’s trusting. On Constitution and in Congress, a Maclean’s reporter found hardly a soul who did.

“I get the fact that it is historic—that it is a big deal,” a woman named Pary Davis was saying of the Singapore summit as Ovie and the trophy approached atop a double-decker tour bus.

“I saw the handshakes but it’s much too early to tell if anything will come out of it,’ said her friend, Laura Lawton. “I don’t have any faith in anything since ‘it’ was elected.”

Lawton couldn’t bring herself to pronounce the word ‘Trump’ aloud—the women were asked if they hoped that the president’s astonishing —and perhaps astonishingly naïve—opening to the DPRK would fail.

“It depends what failure is,” said Lawton who, never an activist until the election of ‘it,’ took part here with thousands of her sisters in the Women’s March and the March For Science and the March For Our Lives.

Tuesday, she was wearing a 40-something-year-old Caps button that her Dad had bought for her—it used to have a rabbit’s foot attached—back when the woebegone expansionists were winning only eight games out of 80, still the worst record in the NHL’s century of operation. “I don’t want to go back to square one, and I don’t want a nuclear war, but if he succeeds, we could have him for four more years.”

“I don’t hope he fails,” agreed Davis. “I love this country. But I need to see tangible results.”

A few metres away, under a towering magnolia tree in full pungent bloom and right beneath the inscription in the cornice of the D.O.J. building that proclaims JUSTICE ALONE SUSTAINS SOCIETY, a 10-year veteran of the department was waving a big Caps towel. This was Edward Redding of the office of maintenance.

Redding, who had been to one of the third-round games against the Tampa Bay Lightning at the Caps’ home arena just north of the Embassy of Canada and its corps of Trudeauvian whiners and milk-tariffers, said he knew by then that these Capitals were a team of destiny, “because every time they faced adversity, they dealt with it.” And this, he said, was largely the work of Alex Ovechkin, “a passionate guy, a man with a tremendous heart.”

“It was collusion with the Russians,” Redding laughed. “The Russians and the other 19 players.”

Up in the D.O.J., there were Capitals banners in some of the windows, making it impossible to tell if Robert Mueller and Jeff Sessions and Rod Rosenstein were peeking through the placards, taking a break from taking down the president to watch the loud hoohah. (Indeed, all federal employees were granted two hours off with pay, so rare are victory parades in Washington, D.C. This was the city’s first championship since the Redskins won the Super Bowl in 1992; its last until Bryce Harper finally leads the baseball Nationals to their long-promised valhalla before seeking asylum next spring as a free agent in Los Angeles or Chicago or New York.)

“Do you think Trump is going down?” employee Redding was asked.

“I think this whole thing is just to keep his name in the freaking news,” he answered. “I like Trump. I don’t think everybody in this country feels the same as they say in the media. The media tries the push their ideas on other people.”

A few blocks to the east, the Congress of the United States was trying to make sense of the Singapore sideshow. A Maclean’s reporter asked a sampling of Senators—all of whom skate on the left wing—for their thoughts on what, if anything, the overwrought Trump and the overweight Kim had wrought.

“The president should get a lot of credit for pulling it off,” allowed Sen. Doug Jones, Democrat of Alabama. “But the devil is in the details. I don’t know why Kim wanted to do this—it might be the sanctions, or it might just be his ego.”

“We treat our oldest allies like crap and then we gave away our bargaining chips for nothing,” said Sen. Chris Murphy, Democrat of Connecticut. “I think we took a big step backward.”

“I don’t trust Kim,” snapped Sen. Ben Cardin, Democrat of Maryland. “I don’t see any specifics.” And this is how it was almost universally in the Capitol, with even such solons as Marco Rubio, Republican of Florida, tweeting that “While I know @potus is trying to butter him up to get a good deal, #KJU is NOT a talented guy. He inherited the family business from his dad & grandfather. He is a total weirdo who would not be elected assistant dog catcher in any democracy.”

“Well he is very talented,” @POTUS Trump refuted while still in Singapore. “Anybody that takes over a situation like he did at 26 years of age and is able to run it and run it tough… few people at that age—you can take 1 out of 10,000 could not do it.”

Back to the Department of Justice, and the Stanley Cup parade in the shadow of the pediment that reads LEGE ATQUE ORDINE OMNIA FUINT – “by law and order, all is accomplished.”

“The NHL and North Korea—are you tired of winning yet?” maintenance man Redding was asked.

“Alleged collusion with the Russians brought us the Stanley Cup!” he laughed as Meester Big and his badenovs rolled by. “Remember—I said ‘ALLEGED.’”