Obama at Hiroshima: 'Death fell from the sky'

U.S. President did not apologize, but did acknowledge devastating toll of war 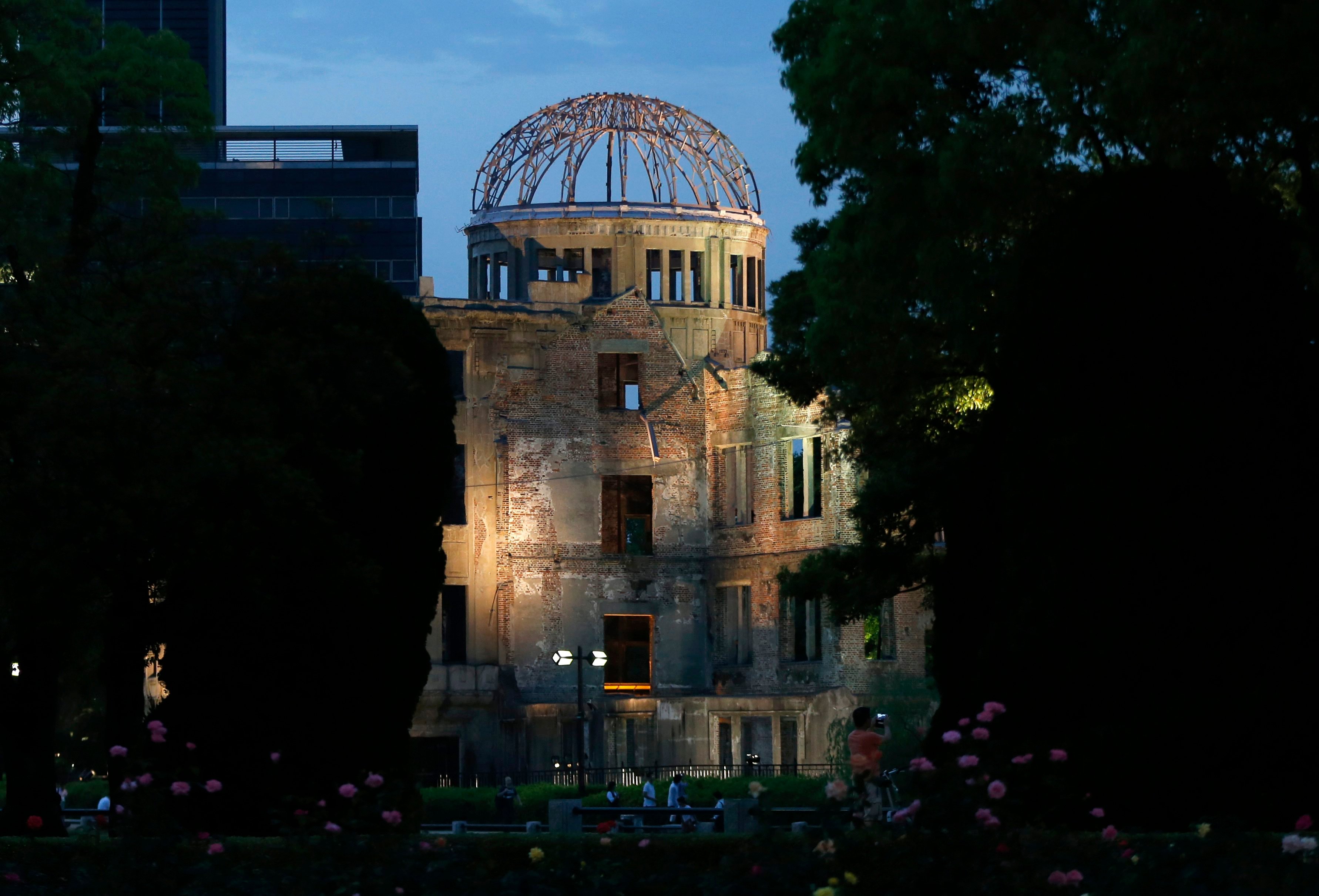 The Atomic Bomb Dome is lit at dusk at the Hiroshima Peace Memorial Park in Hiroshima, southwestern Japan, Thursday, May 26, 2016.  (Shuji Kajiyama, AP)

HIROSHIMA, Japan — Barack Obama on Friday paid tribute to the 140,000 people killed by the world’s first atomic bomb attack and sought to bring global attention to his unfulfilled vision of a world without nuclear weapons, as he became the first sitting U.S. president to visit Hiroshima.

“Death fell from the sky and the world was changed,” Obama said, after laying a wreath, closing his eyes and briefly bowing his head before an arched monument in Hiroshima’s Peace Memorial Park that honours those killed on Aug. 6, 1945, when U.S. forces dropped the bomb that ushered in the nuclear age. The bombing, Obama said, “demonstrated that mankind possessed the means to destroy itself.”

Obama did not apologize, instead offering, in a carefully choreographed display, a simple reflection on the horrors of war and his hope the horror of Hiroshima could spark a “moral awakening.” As he and Japanese Prime Minister Shinzo Abe stood near an iconic bombed-out domed building, Obama acknowledged the devastating toll of war and urged the world to do better.

“We stand here in the middle of this city and force ourselves to imagine the moment the bomb fell … we listen to a silent cry.” Obama said.

Obama also sought to look forward to the day when there was less danger of nuclear war. He received a Nobel Peace Prize early on his presidency for his anti-nuclear agenda but has since seen uneven progress.

“We must have the courage to escape the logic of fear and pursue a world without them,” Obama said of nuclear weapons.

The visit presents a diplomatic tightrope for a U.S. president trying to make history without ripping open old wounds. He did not apologize for the attack, which is viewed by many in the U.S. as having hastened the end of World War II; others have called it a war crime that targeted civilians.

Critics believe Obama’s mere presence in Hiroshima will be viewed as an apology for what they see as a justified attack. But he has also drawn praise from those who see it as a long overdue gesture needed to heal old wounds.

Obama touched down in Hiroshima after completing talks with world leaders at an international summit in Shima, Japan.

Those who come to ground zero at Hiroshima speak of its emotional impact, of the searing imagery of the exposed steel beams on the iconic A-bomb dome. The skeletal remains of the exhibition hall have become an international symbol of peace and a place for prayer.

Bomb survivor Kinuyo Ikegami, 82, paid her own respects at the cenotaph on Friday morning, well before Obama arrived, lighting incense and chanting a prayer.

Tears ran down her face as she described the immediate aftermath of the bomb.

“I could hear schoolchildren screaming: ‘Help me! Help me!”’ she said. “It was too pitiful, too horrible. Even now it fills me with emotion.”

Han Jeong-soon, the 58-year-old daughter of a Korean survivor, was also at the park Friday.

“The suffering, such as illness, gets carried on over the generations — that is what I want President Obama to know,” she said. “I want him to understand our sufferings.”

Obama’s visit is a moment 71 years in the making. Other American presidents considered coming, but the politics were still too sensitive, the emotions too raw. Jimmy Carter visited as a former president in 1984.

Even now, when polls find 70 per cent of the Japanese support Obama’s decision to come to Hiroshima, Obama’s visit is fraught.

His choreographed visit will be parsed by people with many agendas.

There are political foes at home who are ready to seize on any hint of an unwelcome expression of regret.

There are Koreans who want to hear the president acknowledge the estimated 20,000-40,000 of their citizens who were among the dead in Hiroshima and Nagasaki.

There are blast survivors who want Obama to listen to their stories, to see their scars — physical and otherwise.

There are activists looking for a pledge of new, concrete steps to rid the world of nuclear weapons.

There are American former POWs who want the president to fault Japan for starting the war in the Pacific.