Obama passes the torch, 12 years after his own was lit

As Barack Obama wields his oratory for Hillary Clinton, his valedictory reveals the audacity of his legacy's scope

With evident glee, slashing sarcasm and nothing to lose but his legacy, Barack Obama tore into Donald Trump Wednesday night as “not really a plans guy. Not really a facts guy, either,” soaring rhetorically at the Democratic National Convention in Philadelphia in support of the widely distrusted woman who is striving earnestly but flightlessly to be his successor.

Obama’s second-fiddling on behalf of nominee Hillary Clinton came 12 years to the day since, as a 43-year-old Illinois state senator known for infrequent attendance and minimal accomplishment, he hypnotized conventioneers in Boston with the soulful “Audacity of Hope” address that made him the instant Aquarius of a generation, bearing a bucket sloshing with change.

“It’s the hope of slaves sitting around a fire singing freedom songs,” Obama said that night, banging the drum for Vietnam War veteran John Forbes Kerry, the Democrats’ effete and unsuccessful francophile challenger to incumbent George Walker Bush. “The hope of immigrants setting out for distant shores; the hope of a young naval lieutenant bravely patrolling the Mekong Delta; the hope of a millworker’s son who dares to defy the odds; the hope of a skinny kid with a funny name who believes that America has a place for him, too.”

Called in 2016 to elevate the woman who was called “the greatest change-maker I have ever known” by her husband the previous evening, Obama admitted to a worshipful convention that, “Look, Hillary’s got her share of critics. She’s been caricatured by the right and by some folks on the left; accused of everything you can imagine—and some things you can’t. But she knows that’s what happens when you’re under a microscope for 40 years. She knows she’s made mistakes, just like I have; just like we all do. That’s what happens when we try.”

On Thursday, in the most important address of her half-century of collegiate and community activism, first ladyship, senatorial lawmaking, diplomatic peregrination and conjugal humiliation, Mrs. Clinton formally, finally, fatefully will accept her party’s nomination—and attempt to group-hug the contumacious “Bernie or Bust” faction that bit the dust in Tuesday’s roll call – a typist following a Tolstoy.

Her speech will come in a hockey rink, hardly the 75,000-seat football stadium that swelled to Obama’s acceptance in Denver in 2008.

On the convention floor on Wednesday, as Obama addressed his multi-hued party in its plenary multitudes for the final time as the 44th president, were hundreds of delegates who could remember July 27, 2004, in Boston, and compare his oratorio to the current candidate.

“Nobody expected him. I didn’t know why they even chose him to speak,” John D. Waihe’e III, the governor of Obama’s natal archipelago from 1986 to 1994, told Maclean’s. “Except that he came from Hawaii, we wouldn’t even have been there. I’d never heard him speak before, but within three or four minutes, we were all sitting there saying, ‘Wow. Wow. Wow.’ ”

“I remember thinking, ‘Who is this skinny guy?’ ” remembered Gary Hawley, a unionized carpenter from Stevens Point, Wisc., who was seated on the podium in Boston when Obama rose to avow “a faith in simple dreams, an insistence on small miracles.”

“In Stevens Point, there isn’t much coloured people there. I’d never heard a black person speak like that.”

“It was inspirational,” recalled another delegate from Dairyland, Melissa Schroeder of Wausau. “I knew right then that he was going to go somewhere. He reminded me so much of Bobby Kennedy.”

“Whom does Hillary Clinton remind you of?” the Wisconsinite was asked.

“I don’t know if she reminds me of anybody,” she replied. “Maybe my mother.”

MORE: In America, they have nothing to fear but American politics itself

“Is it fair to say that Barack Obama won the presidency through the power of the spoken word?” former governor Waihe’e was asked.

“The spoken word was important, but he also fit the times,” he replied. “Sometimes, people just match the times that we are in. Your words only mean something when you speak them in the context of your times and your audience’s desires.

“Bill Clinton certainly matched his time. But one of the greatest speakers I ever heard was Jesse Jackson when he ran for president against Michael Dukakis in 1988. When Jackson spoke at our convention, nobody even wanted to listen to Dukakis speak. But the times weren’t ready for Jesse to be president. Then Obama came along and we were ready for him.”

“Does Hillary fit her time?” a reporter wondered.

“I think Hillary is in a difficult time,” Waihe’e said. “America is neither right nor left today – it’s just angry. What people want to hear is anger, and Hillary by her inclination wants to build, not tear down. She has to overcome that.” 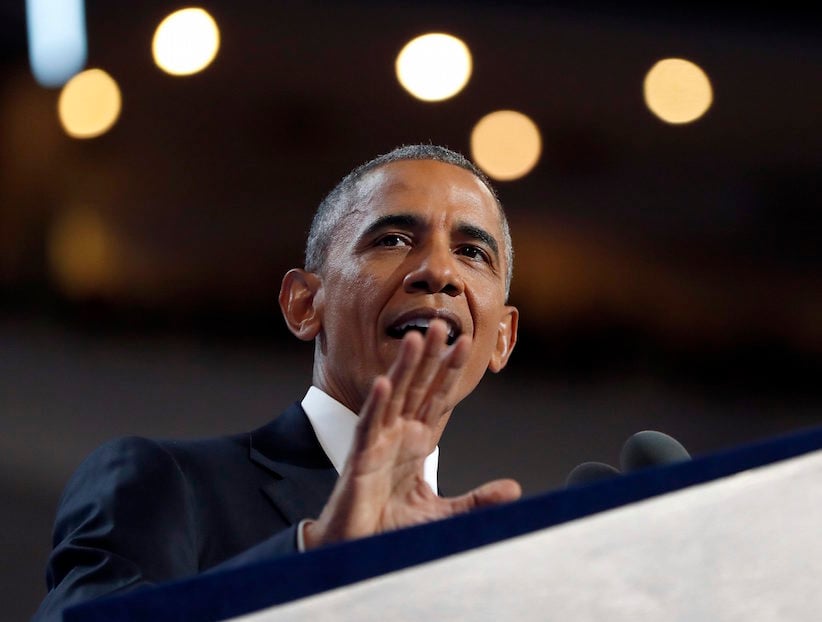 Yet there had been more than flighty prose to Obama’s seven years in office, the delegates said. Melissa Schroeder noted that, without Obamacare, her nine-year-old grandson never would have received adequate treatment for a congenital coronary defect.

“His heart is enlarged,” she said. “Unlike Trump’s.”

Obama’s valedictory, in which Hillary Clinton’s name was never uttered until after 11 minutes of self-congratulation, capped yet another day that saw Trump, the Republican wolverine, devour yet another news cycle with his solicitation that Vladimir Putin invade and unveil Sec. Clinton’s thirtysomething-thousand missing emails from her tenure at the Department of State. “I never met Putin. I don’t know who Putin is,” Trump wink-winked in Florida.

“For the record, I have zero investments in Russia,” he bragged. Then, moments before Obama arrived at the convention, Trump texted his supporters:

“UPDATE. Clinton Foundation is under investigation by the IRS. This is what 4 more years will look like with Crooked Hillary in office. Reply DONATE to give $10.”

Meanwhile, at the home of the NHL Flyers and the woebegone basketball 76ers, day three of the DNC was consumed by seven hours of sectarian blah-blah from the blue-carpeted stage—and one even-handed attempt at non-partisan healing.

“I’m a New Yorker, and I know a con when I see one!” declared Michael Bloomberg, the media billionaire, former Democrat, former Republican, and three-term Gotham mayor who—despite entreaties from both parties—never has been sufficiently motivated to launch a White House bid of his own.

Admitting that “Hillary Clinton is not flawless; no candidate is,” Bloomberg argued that “No matter what you may think about her politics or her record, Hillary Clinton understands that this is not reality television, this is reality.

“We’ve heard a lot of talk in this campaign about needing a leader who understands business. I built a business, and I didn’t start it with a million-dollar cheque from my father. The richest thing about Donald Trump is his hypocrisy.”

“If the Chinese were really capable of designing some kind of diabolical farce to hurt America, they wouldn’t invent global warming. They’d invent Donald Trump,” snapped Martin O’Malley, the handsome and musical former Maryland governor whose own left-lane campaign for the Democratic nomination was run off the road by the Sanders revolution.

“The hell with Trump’s American nightmare!” 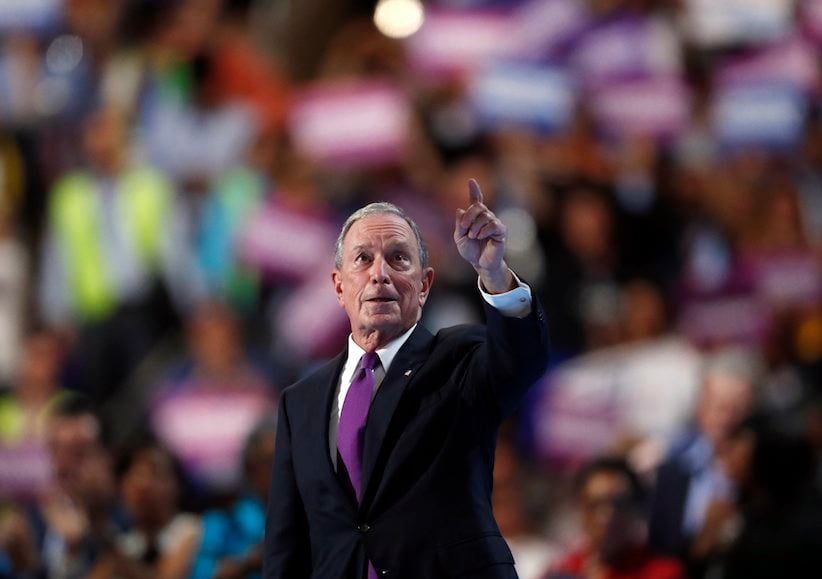 “They train you to speak at these things,” former governor Waihe’e laughed. “You’ve got to go to school before you go on stage. The first thing they tell you is, ‘Don’t expect anybody to be listening.’ But you know that you are speaking to millions of people.”

But even as O’Malley, Bloomberg, Vice-President Joe Biden, Senate minority leader Harry Reid, and dozens of other politicos, HIV/AIDS activists, military widows, parents of mass-shooting survivors, and party loyalists rose to define Clinton and defame her foe, attendees of a certain age could look back to another superb example of pungent speechifying in defence of overturning a stagnant status quo:

“Do you know who spoke those words?” Maclean’s asked delegates.