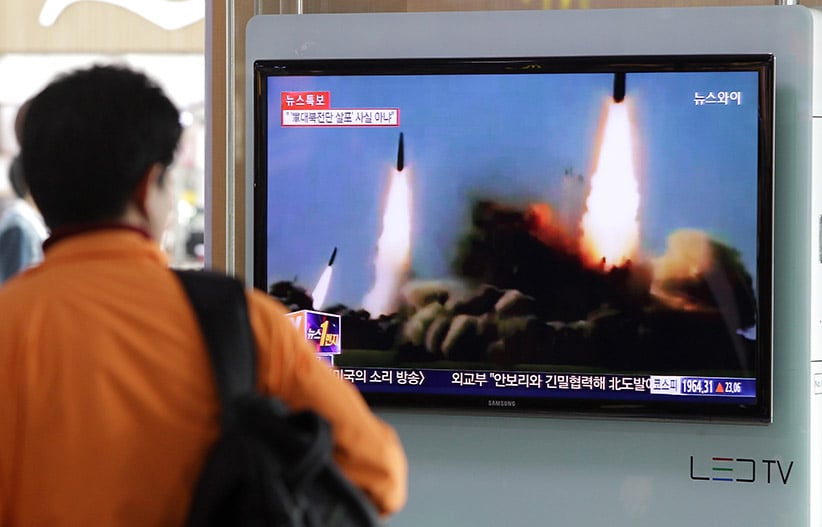 VIENTIANE, Laos — In the wake of another missile launch, President Barack Obama vowed Tuesday to work with the United Nations to tighten sanctions against North Korea, but added that the U.S. was still open to dialogue if the government changes its course.

Obama said the latest round of ballistic missile launches were “provocations” that flouted international law and would only lead to further isolation.

North Korea fired three ballistic missiles off its east coast Monday. The launch was widely viewed as a show of force timed to get the attention of world leaders visiting the region for a series of summits. Obama and other heads of state gathered in China over the weekend for the Group of 20 economic summit. Obama went on to Laos for a meeting of the Association of Southeast Asian Nations.

The U.N. Security Council in late August strongly condemned four North Korean ballistic missile launches in July and August. It called them “grave violations” of a ban on all ballistic missile activity. Despite the heavy sanctions, North Korea says the programs are justified because of the threat posed by the U.S. and South Korea.

Park told reporters North Korea’s move was “fundamentally threatening the security” of the Korean Peninsula. Both leaders suggested they would continue to push China, North Korea’s only ally in the region, to use its influence to intervene.

“President Park and I agreed that the entire international community needs to implement these sanctions fully and hold North Korea accountable,” Obama said.

Obama added that the U.S. had not closed off the possibility for dialogue with North Korea, if it were to change course.

“If it is willing to recognize its international obligations and enforce the denuclearization of the Korean Peninsula, the opportunities for us to dialogue with them are there,” Obama said. “We do not have any interest in an offensive approach to North Korea.”