Obama's message to Democrats: Get serious

On day 3 of the Democratic National Convention, Republicans and Democrats exchange charges on the email hack 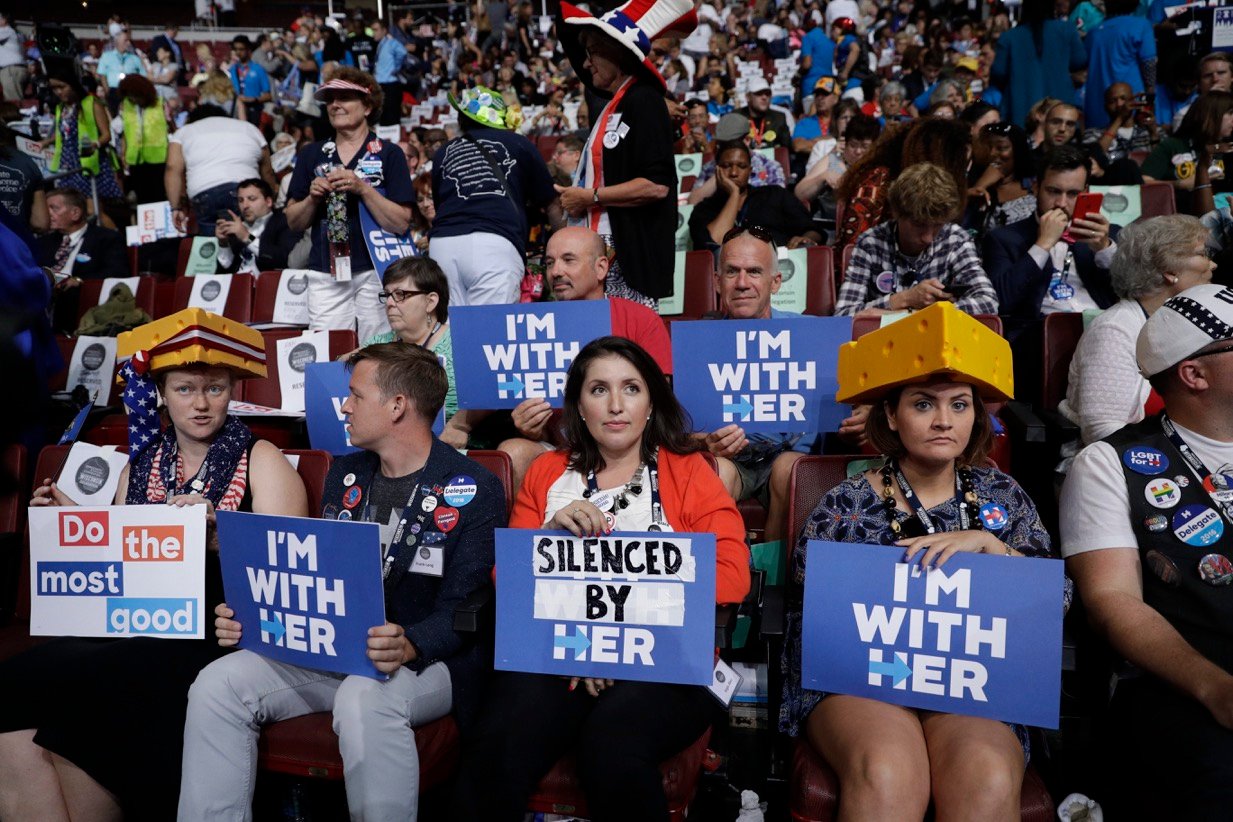 Wisconsin delegates wait before the start of the second day session of the Democratic National Convention in Philadelphia. (AP Photo/John Locher)

The Democrats’ historic handoff to Hillary Clinton arrived with affection from one ex-president and an endorsement from an outgoing one. But it also came with a warning: That last glass ceiling isn’t shattered yet and Republican Donald Trump is a formidable foe.

Clinton formally captured the Democratic nomination Tuesday night and declared the barrier keeping women from the presidency nearly broken. Her husband, Bill Clinton, closed the historic night with an expansive and passionate testimonial, offering a deeply personal — though scandal-free — account of their relationship.

It also was a policy-driven ode to the “best darn change-maker I have ever met.”

On Wednesday night, President Barack Obama will make his case for electing the former first lady, senator and secretary of state as the first woman to occupy the Oval Office. But he will also tell Democrats to get serious.

“Anything is possible,” Obama said in an interview on NBC’s “Today” show. “Anybody who goes into campaigns not running scared can end up losing,” he said.

Obama also stirred a new fight with Trump in the interview, aired Wednesday.

The president has said Russians appear to be behind the hack of Democratic National Committee emails that toppled the party’s chief earlier this week. Providing no evidence, Obama suggested in the interview that Russian President Vladimir Putin was actually rooting for Trump and said the GOP businessman has “expressed admiration” for Putin.

Trump pushed back on the Democrats’ insinuations that Russia is trying to tip the scales in his favour.

“I have nothing to do with Russia,” he exclaimed in a free-flowing news conference at his resort in Florida. “I said that Putin has better leadership qualities than Obama, but who doesn’t know that?”

Wednesday night’s Democratic session will include nods to the past and the possible future. Vice-President Joe Biden will deliver his valedictory. Clinton’s running mate, Virginia Sen. Tim Kaine, will get his turn in the spotlight.

Hillary Clinton was affirmed as the party’s nominee Tuesday night at a convention that appeared to be finding its stride as it focused on appealing to the coalition Clinton will need to win — blacks, Hispanics, women and young people — and putting to bed the drama of formally defeating liberal challenger Bernie Sanders.

The base-boosting strategy has some Democrats worried Clinton is ceding too much ground to her opponent. Her convention has made little mention of the economic insecurity and anxiety that has, in part, fueled Trump’s rise with white, working-class voters. Trump has cast himself as the “law-and-order” candidate and promised to get tough on terrorists. Democrats have rarely noted the threat of terrorism or the Islamic State group.

Speaking on MSNBC Wednesday morning, Biden said his party has failed to connect with and show “respect” for white, working-class voters.

Trump accused Democrats of avoiding talking about the Islamic State group “because they grew it.” In his news conference, he hammered Clinton on her trade policy, saying if she is elected she will flip her opposition to the Trans-Pacific trade deal. He also backed an increase to the minimum wage to $10 per hour.

During the Democrats’ convention, the fallout from the hack and the effort to appease Sanders’ fans have competed with the celebration of Clinton’s landmark achievement. But Tuesday night’s roll call vote sealed her nomination without trouble inside the hall and Sanders himself stepped up in the name of unity to ask that her nomination be approved by acclamation.

The unhappiest among his followers filed out, occupied a media tent and staged a sit-in, some with tape on their mouths to signify their silencing by the party. But a teary Sanders acknowledged the end. Obama was “kind enough to call,” he said Wednesday in a meeting with New England delegates. “As of yesterday, I guess, officially our campaign ended.”

The roll call vote was laden with emotion and symbols of women’s long struggle to break through political barriers. Holding a sign saying “Centenarian for Hillary,” 102-year-old Jerry Emmett of Prescott, Arizona, cast her state delegation’s vote. She was born before women won the right to vote in 1920, and remembered her mother casting a ballot for the first time.

Said Clinton, in a surprise appearance on video at night’s end: “We just put the biggest crack in that glass ceiling yet.” The crowd roared.

Bill Clinton traced the couple’s love story chapter and verse, starting from their meeting in a library and proceeding through his head-strong courtship and on through the years. Unsavory episodes, like his numerous dalliances with women in Arkansas and the nearly career-ending liaison with White House intern Monica Lewinsky, were omitted.