On inauguration week, a moment for memorials in Washington

Americans consider the meaning of the looming Trump presidency at the memorials for Martin Luther King, Jr. and Franklin Delano Roosevelt 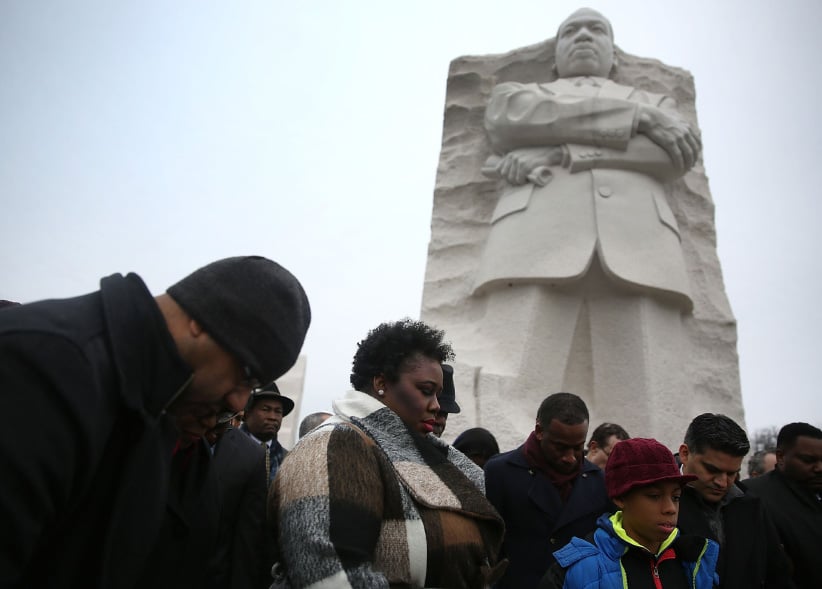 People pray together in front of the Martin Luther King Jr. memorial on the day that honors him on January 16, 2017 in Washington, DC. Martin Luther King day is a national holiday that observes the birthday of the civil rights icon and is a way to remember all that he accomplished. (Joe Raedle/Getty Images)

On Monday morning, 100 hours before the start of Donald John Trump’s first 100 days in the Oval Office, a small crowd gathered under a dreary sky at the memorial to the Rev. Dr. Martin Luther King, Jr. on the national holiday that marks the great dreamer’s date of birth.

A few dozen chairs and a microphone had been set up, and addressing the shivering assemblage was a man from Baltimore named Jeff Johnson, a writer, consultant, and former national youth director of the National Association for the Advancement of Colored People. Behind Johnson was the giant slab of “shrimp pink” granite from which a much-larger-than-life-sized effigy of Dr. King emerges, arms crossed and eyes narrowed, to confront the slaveholder Thomas Jefferson in his alabaster rotunda on the opposite coast of a goose-filled pond.

Jetliners were lifting off from Ronald Reagan National Airport every few seconds, reducing Johnson’s commemorative address to a series of dislocated, though still effective, fragments:

“The ridiculous idea of a ‘post-racial’ America . . . there will always be racism . . . we need to do more than make our children simply regurgitate the ‘I have a dream’ speech . . . build an ecosystem of productivity instead of the echo chamber of shouting at each other . . . Donald Trump is not going to destroy OR save America . . . I don’t care about Trump . . . I care about the human citizen . . .”

To this were added the shouts of a half-dozen anarchists beating drums and chanting their now-familiar homily of “No Trump, no KKK, no fascist USA!” Also: the voices of celebrants softly singing “We Shall Overcome”; bull-horned guides on double-decker tour buses passing by on Independence Avenue; the groans of backhoes hauling barricades and fencing and thick concrete stanchions to protect the 45th president and his family and his deplorables from the fanatics of ISIS and the homegrown Booths and Oswalds and Hinckleys who lie in wait for the American president, no matter who the American president is.

Jeff Johnson and several other dignitaries proceeded to the shrimp pink monument itself and placed a wreath beneath the artificial Everest with its inscription that reads “out of the mountain of despair, a stone of hope.” They talked about the coming of the Donald and the concurrent departure of their brother Barack Obama, whose own memorial someday will hug this same muddied, hallowed shore.

“African-Americans are a people who have challenged every president in history,” Jeff Johnson said. “But we did not challenge President Obama, because we were protecting President Obama.”

“Was that a mistake?” the activist was asked.

“It is always a mistake when a people demonstrate a lack of responsibility for their own future,” he answered. “We did not give Barack Obama a chance to be as great as he could have been.”

Donald Trump’s presidency, said Jeff Johnson, “is a very interesting opportunity for some really fundamental change in this country. When you have a market-driven president, you have a chance to achieve market-driven results.”

“It is surprising to hear an African-American say that,” Johnson was told. (By this point, 20 black members of Congress already had announced that they would boycott Friday’s swearing-in, led by Rep. John Lewis of Atlanta, the luminous and unimpeachable civil rights crusader on whom the Donald had been releasing a repugnant barrage of Twitter droppings all week.)

“We are not monolithic,” Jeff Johnson replied.

A few paces away from Martin Luther King’s defiant tableau is the national memorial to Franklin Delano Roosevelt, the 32nd president of the United States. When you first see FDR, it is as a bronze effigy in a wheelchair, polio-stricken but smiling, and behind it on a wall is a quotation in English and Braille from his wife, Eleanor, that says “Franklin’s illness . . . gave him strength and courage he had not had before. He had to think out the fundamentals of living and learn the greatest of all lessons—infinite patience and never-ending persistence.”

It was Franklin Roosevelt whose immediate moves in 1933 to stabilize the nation’s collapsing banking system and put millions of Americans to work on the federal payroll first gave rise to the persistent, if facile, concept that a new president must manifest his actions in his first 100  days or be deemed a failure. Not to be outdone by a mere Roosevelt, Donald Trump has pledged to condense such achievements into his first 100 seconds.

On Monday morning, the open-air memorial—four elegiac, sculpture-filled “rooms” representing each of FDR’s terms in office—was deserted save the bronzes and bas-reliefs. A visitor who wondered what, if any, personal misery might inform the world view of Donald John Trump, who never went to war, or knew a hungry hour, or lacked for shelter, work, or the physical ability to strut and sneer and grope.

Now a couple of tourists from Oregon, a wife and husband, wandered through the memorial. They declared that they were environmental activists who had come all the way from the Pacific Coast with the grand intention of not showing up on Friday. Instead, they would take part in various protest marches around the capital, he in a Trump mask and an inflatable suit that makes him look like a naked baby sumo wrestler, and she with a sign that says “the emperor has no clothes.”

“Could Donald Trump be another FDR?” the Oregonians were asked.

“Maybe another Stalin,” the husband replied.

Suddenly, there was a commotion at the memorial to Dr. Martin Luther King, Jr.—Mike Pence, the vice-president-elect, was stopping by to be photographed beneath the statue.

“Do you think that Donald Trump can carry on the dream of Doctor King?” a woman repeatedly hollered, but it is possible that Mike Pence could not hear her over the roar of the gaining jets. After a seemly two or three minutes, the new veep had had enough and walked away.

Watching all this was a man named Tezera who said that he had come to the United States from Ethiopia in 1994.

“Do you have to know suffering to be a great president?” he was asked.

“The reason that people cross thousands of miles to get to this country,” he replied, “is because of all the suffering that they have seen. That is what keeps them going.

“Everyone in every country looks to America,” said Tezera, who works for the U.S. Department of the Interior and, starting Friday at noon, for Donald John Trump.

“My hope,” Tezera said, “is that his tweeting will get shifted by the reality of things. Part of me is scared to death. But 30 per cent inside me says he can do good.

“Will you miss Barack Obama?” he was asked.

“Oh, he could talk!” the African-American said. “Oh, that man’s words could hold water! But today’s problems, inside and outside the country—today’s problems cannot be talked away. Please. Let us give Trump a chance.”