On the road to the DNC: Fear, falafel, and Barney Fife

Halfway between Cleveland and Philadelphia, Allen Abel talks politics in a small town 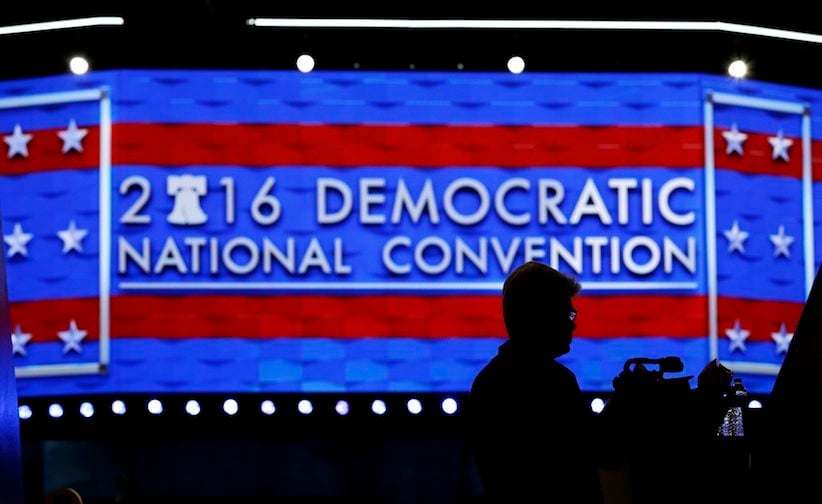 A member of the media shoots video during setup before the 2016 Democratic Convention, Sunday, July 24, 2016, in Philadelphia. (AP Photo/John Locher)

MORGANTOWN, West Virginia — Halfway between Cleveland and Philadelphia, somewhere betwixt the Republicans’ dystopia and the Democrats’ kumbaya, a thick blue tarp covered a statue of a city’s favourite son.

Across the avenue from this shrouded new monument – it was High Street in downtown Morgantown, W.V. – a white guy named Sonny and an African-American guy named Trey were eating lunch. Trey was in his twenties and just out of jail after serving a few months for stealing a case of Budweiser. Sonny, his thirtysomething boss on a renovation project in town, was so splattered with paint that he looked like a Holstein cow.

“Ain’t painted in a while,’ he shrugged.

It was the day after Donald Trump promised Americans that, in a world of unfair trade and Satanic terror, he will be Your Voice, and that Law and Order will reign from Atlantic to Pacific within an hour of his inauguration; 90 minutes tops.

“Scared? I ain’t scared of nothin’, brother,” Sonny was saying. “I fear God.”

“Do you think Trump understands working men like you?” the Caucasian was asked.

“He’s got too much money to understand anything,” Sonny replied.

“He said he’s going to make law and order the reality all across the United States,” a traveller ventured.

“I wouldn’t say it’s exactly lawless right now,” Sonny objected. “They pulled me over for having a cellphone in my hand. Cost me a hundred dollars and I wasn’t even makin’ a call.”

“They got me for stealing beer, but I did it for years and never got caught before that,” Trey revealed.

“You went to jail for stealin’ beer?” Sonny laughed.

“Usually, when I stole, I stole liquor – and I mean the good stuff, Grey Goose,” Trey said in self-defence.

“I think I might vote for Trump,” said the black man, who had been convicted of a misdemeanour and not a felony, which could have cost him his suffrage. So now Donald Trump could boast that he has two African-Americans, counting the fellow he singled out at an otherwise all-white rally in Redding, Calif., a few weeks back.

While everyone was eating his lunch, a local radio station reported that a police officer in nearby Upshur County, W.V., had shot and killed a citizen “after receiving a call about a possibly intoxicated man riding a motorcycle on another person’s property.

“Both men fired once,” the Upshur sheriff was quoted as saying. No other details were released.

“’Kill’ is pretty drastic,” said his boss, Morgantown’s Michaelangelo. “I just want to put ‘em in the f–king hospital.”

Talk turned to Hillary Clinton, who will be handed a scimitar in Philly this week and sent out to decapitate the Donald.

“She’s a crook, a liar, and a this-and-that,” Sonny contributed.

The lunch spot weren’t no hillbilly diner serving no possum stew; it was a Palestinian-Libyan café and the workmen were eating falafel. Behind the counter was an immigrant from Tripoli named Wael. He had been harkening to Trump with trepidation, especially when the nominee said that the only Muslims that he wants in this country were those “who love the American people.”

More from Abel: It’s Donald Trump’s world. And Americans are living in it.

Wael loved at least three American people; his Puerto Rican wife and their two kids. “If Trump is going to send all the foreigners, all the Mexicans, back where they came from, it’s going to take years,” said the green-carded Arab, who had come to Morgantown to study English at West Virginia University. “How would it be doable? Do you think he really will?”

Wael and his Palestinian employer weren’t the only adherents of Islam in Morgantown – on the same block of High Street alone were two other restaurants operated by people from Syria. And there were four clean-shaven young men at a corner table, chatting softly in Arabic; they could have been plotting to blow up the mysterious statue, or debating the merits of the tabbouleh salad.

“How do people react to having Arabs in town?” Wael was asked.

“They treat me pretty much like I don’t exist,” he replied.

“Do you go in the back room and celebrate whenever there is an Islamic terror attack?” one wondered. (Donald Trump, of course, claims to have seen “thousands” of Arab-Americans dancing in the streets of New Jersey on Sept. 11, 2001.)

“They are killing my people, too,” Wael said.

A block away was a small museum of Morgantown history. There were photographs of factories that had closed and railroads whose tracks had been ripped up and the roller coaster that the local kids used to ride, down in the Monongahela valley. One display was devoted to the man whose life-sized likeness was sequestered under the blue tarpaulin.

The docent at the museum was a school-bus driver and retired job printer named Swifty. (His real name was Harold but he had been the fastest runner on his high school basketball team.) Swifty had gone up to Pittsburgh the night before to see the Pirates play, and he said that “our seats were up in the top deck, and as I went up there I was thinking, ‘What if someone sets a bomb off up here and the stadium collapses and I fall down with it?’

“I don’t want to have fear. I don’t want to give them the pleasure of me being afraid. I want Donald Trump to go after these extremists. I’m surprised there haven’t been more attacks.”

“Why Trump?” Shifty was asked, as millions of Americans will ask themselves between now and November.

“I want a businessman to fix the economy,” he answered. “And I especially like the fact that he digs coal.”

This was a play on words, of course; Donald J. Trump is unlikely to have mined anything in his life but money. But the score in Morgantown this noon was Trump 3, Clinton 0. (Wael, not yet a citizen, cannot vote.)

You may be wondering: who was that famous son of Morgantown under the thick blue canvas? It was Jesse Donald Knotts, who was born here in 1924 and who, like Wael from Libya, graduated from WVU. In the 1960s, Don Knotts won five Emmy Awards for his heartwarming portrayal of a small-town deputy sheriff who – despite delusions of constabulary grandeur – was so discombobulated that he was permitted to carry only one bullet for his service revolver, and he had to keep it in his shirt pocket.

From where Sonny and Trey were sitting, the memorial was easily visible through the front window of the Palestinian/Libyan restaurant called Salam, which is Arabic for “peace.”

“Do you know who the statue across the street is?” the renovators were asked as they ate their foreign food. They didn’t.

“It’s Don Knotts, the actor from Morgantown who played Barney Fife on The Andy Griffith Show,” they were told.

“I think he pulled my brother over a couple of times,” said Trey.

On Saturday morning, Don Knotts’s daughter Karen came to Morgantown to unveil the statue. She is an actress in her own right and performs a one-woman show, telling anecdotes about her famous father, who died in 2006.

Karen Knotts, who lives in southern California, told Maclean’s that Morgantown reminded her of Mayberry: “the rural quality, the loyalty.” Her father, she said, was not the bumbler of the television show; he was “an intelligent, worldly, sophisticated person.”

“As Barney Fife,” she said, “he was like a child, in that every emotion showed on his face. As adults, we have to censor that.”

“I don’t see Trump’s America,” she replied. “I still see a very strong optimism in people. Of course, there are concerns, but I don’t see a dread.

“I think what keeps the love of Mayberry so strong is that everyone wants to hold on to that idea of friendship and family. People are more concerned with losing that than any outside threat.”