On the stump with the would-be first first gentleman 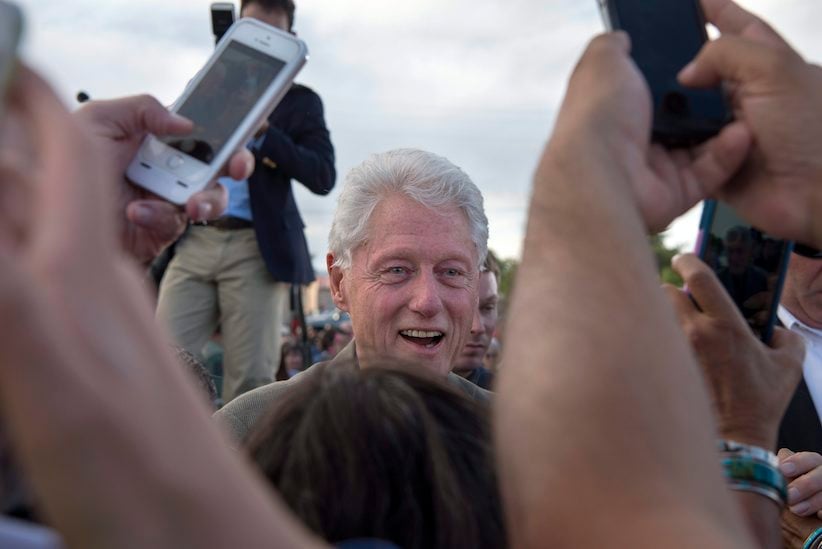 They were reminded that the man approaching the stage could inaugurate a new term in the country’s political vocabulary — one for the husband of a U.S. president.

It gets closer to reality Tuesday.

Barring a stunning, arithmetic-bending turn of events, Hillary Clinton will conclude the last major batch of six primaries having clinched the Democratic nomination to become the first female major-party candidate for president.

“The world has never known the term the first gentleman of the United States,” said Chris Williams, a pastor who spoke at a rally Monday in a school off the highway.

“Back in ’93 … Hillary had the opportunity to pick the paints and the colours and the floor patterns and the things that she wanted in the living quarters of the White House.

“This time Bill will have the opportunity of picking the stripes and the solids of the things he wants.”

More precisely, he climbed atop a pickup truck. If his wife was approaching history, he rode toward it on a flatbed. Hundreds of kilometres away from Hillary Clinton’s campaign rallies in southern California, the ex-president spoke from vehicles at multiple stops Monday in the northern part of the state.

This man who once hosted international summits was making his closing pitch in small venues so intimate that people who wandered in got bottled water instead of a security pat-down.

“I once had this job that she’s running for,” Clinton said, drawing cheers.

“Here’s what I want to say about that.”

The inveterate campaigner proceeded to make the case for his spouse on three grounds: her better plan to help the middle class, her knowledge and experience, and a track record of working with Republicans in Congress.

His frame is thinner now, following a heart bypass and veganism. So is his voice. The occasional, toady staccato of yesteryear has given way to a more prolonged hoarseness.

But the ability to tell a story from a stage — it’s still there.

He suggested the opponent’s slogan was a racial dog-whistle: “That’s a code word. I’m a white southerner. I know.”

“What it really means is, ‘I’ll make America great like it was 50 years ago.”’

The past economy wasn’t so good for women, and many families, and African-Americans, he said. Instead of re-creating yesterday’s economy, he added, why not embrace modern opportunity?

To illustrate that, he described meeting a brilliant young researcher from coal country who’s working on nanosatellites _ and who predicts that within a few years 3D printers will produce dirt-cheap solar panels and provide far easier access to power than coal. “Nineteen years old,” Clinton marvelled.

A few hundred people cheered him on, “Bill! Bill! Bill!” Outside the schoolyard, a couple of hecklers shouted. One hollered the nickname stuck upon him in past scandals: “Slick Willie!”

Spectators said they’d forgiven old misdeeds like the infidelities that had caused the likely 2016 nominee such pain and public humiliation.

“I don’t want to get biblical on you. But all have sinned and fallen short of God’s glory,” said supporter Odesla Browning.

“He’s awesome. He always has been. He’s never at a loss for words. He knows what to say.”

Some in the audience winced when the introductory speaker stumbled a couple of times over one word: Rodham. The pastor pronounced it, “Rodman.”

It’s the name the likely nominee gave up in Arkansas. Her refusal to take her husband’s name had harmed his gubernatorial career. Some of her friends lamented the choice because they viewed her as the brighter political star.

Now she’s poised to be a presidential nominee.

In the audience Deb Tellier celebrated the moment. She’s a lawyer like Hillary Clinton, and recalls the sexism in their profession when they started out: “I think it’s a seminal mark for our country _ the fact that a woman can aspire to, and actually be, president.”

Up on the pickup truck, the would-be first first gentleman took another swipe at Trump’s pining for the past.

“Getting yesterday’s economy is like trying to be young again,” Clinton said.