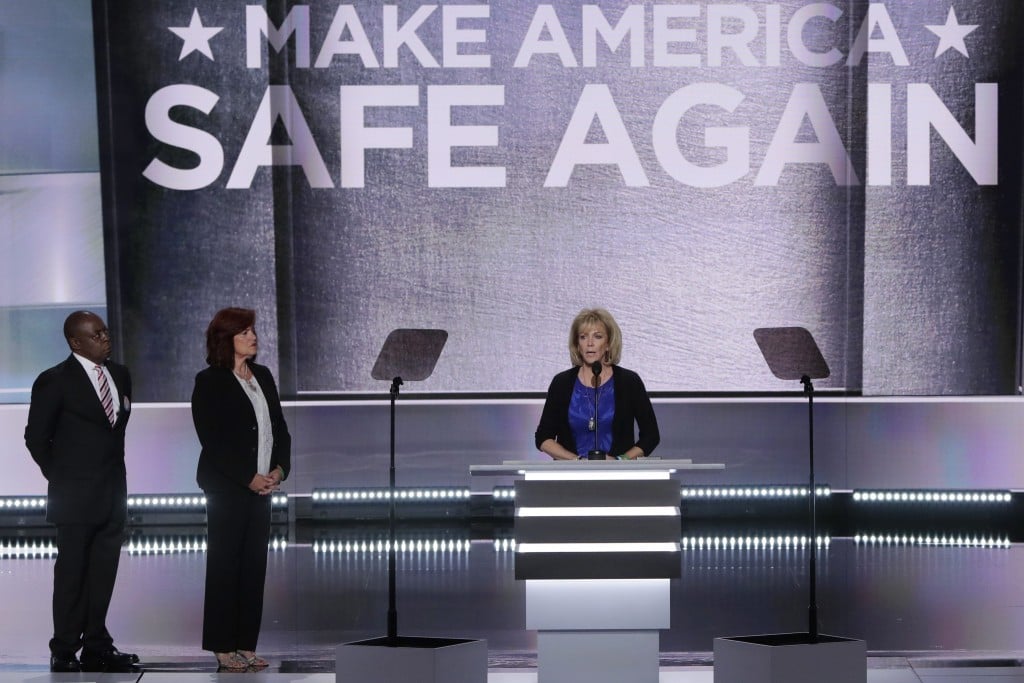 CLEVELAND – Painting a bleak picture of America’s future, Republicans promised a new era of security with Donald Trump as president as they opened a four-day convention against the backdrop of an unsettling summer and deep party divisions.

The doom-and-gloom message was expected to be offset later Monday night by the candidate’s wife, Melania Trump, who was taking a rare turn in the political spotlight to show a kinder, gentler side of her brash husband. In an unusual step for a candidate, Trump announced he would come to Cleveland and introduce her.

Mrs. Trump was the first of several family members and friends who will take the stage in Cleveland during the convention that officially kicks of the businessman’s general election battle with Democrat Hillary Clinton. But many of the party’s past and future stars are glaringly missing from the lineup, underscoring the concerns GOP leaders have with closely aligning themselves with Trump.

Republican divisions erupted briefly on the convention floor Monday afternoon after party officials adopted rules by a shouted voice vote. Anti-Trump forces seeking to derail his nomination responded with loud and angry chants, though they were quickly quieted and there were no lingering signs of the protests as delegates returned to the cavernous convention hall for the evening program.

Trump hoped the chaos would be little more than a footnote. Despite persistent party divisions, his campaign is confident Republicans will come together behind their shared disdain for Clinton.

The theme of the opening night was “Make America Safe Again” and a parade of speakers told emotional stories about loved ones killed while serving in the military or at the hands of people in the United States illegally.

Republicans also highlighted at length the deadly 2012 attacks on Americans in Benghazi, Libya, while Clinton was serving as secretary of state. The mother of one of the victims choked back tears as she personally blamed Clinton for her son’s death and giving a false explanation for the attack.

“If Hilary Clinton can’t give us the truth, why should we give her the presidency,” Pat Smith said.

The convention comes amid a wrenching period of violence and unrest, both in the United States and around the world. In a matter of weeks, Americans have seen deadly police shootings, a shocking ambush of police in Texas and escalating racial tensions, not to mention a failed coup in Turkey and gruesome Bastille Day attack in Nice, France. Three police officers were killed in Baton Rouge, Louisiana, on the eve of the convention’s opening day.

Convention speakers relentlessly cast the troubling times as a result of ineffective leadership by President Barack Obama and Clinton, who spent four years in his administration.

“Hillary Clinton cannot be trusted. Her judgment and character are not suited to be sitting in the most powerful office in the world,” said Sen. Joni Ernst, R-Iowa, according to excerpts of her speech released in advance.

Clinton, during remarks Monday at the NAACP’s annual convention, said there was no justification for directing violence at law enforcement.

“As president, I will bring the full weight of the law to bear in making sure those who kill police officers are brought to justice,” she said.

Trump has been vague about how he would put the nation on a different course, offering virtually no details of his policy prescriptions despite repeated vows to be tough.

Campaign chairman Paul Manafort said Trump would “eventually” outline policy specifics but not at the convention. However, Trump said in a Monday night interview with Fox News that his convention speech Thursday would discuss a “major, major” tax cut, immigration, getting rid of burdensome regulations and taking care of veterans.

While Trump has been a highly unorthodox candidate, his convention opened in a traditional manner. Sign-waving delegates decked out in patriotic colours filled the arena, leaping to their feet in frequent bursts of applause.

Yet the line-up of speakers and no-shows for the four-night convention was a visual representation of Trump’s struggles to unify Republicans. From the party’s former presidents to the host state governor, many leaders were staying away from the convention stage, or Cleveland altogether, wary of being linked to a man whose proposals and temperament have sparked an identity crisis within the GOP.

That left Trump with an eclectic array of validators, including Scott Baio and Willie Robertson, star of “Duck Dynasty,” who took the stage with an American flag bandanna wrapped around his head.

“No matter who you are, Donald Trump will have your back,” Robertson said as he opened the evening program.

Trump’s team insists that by the end of the week, Republicans will plunge into the general election campaign united in their mission to defeat Clinton. But campaign officials undermined their own effort Monday by picking a fight with Ohio Gov. John Kasich, who is not attending the convention and has yet to endorse Trump.“

Manafort, in remarks to reporters at a Bloomberg breakfast, called Kasich “petulant” and said the governor was “embarrassing” his party in his home state.

Even some of those participating in the convention seemed to be avoiding their party’s nominee. When House Speaker Paul Ryan spoke to Wisconsin delegates Monday morning, he made no mention of Trump in his remarks.

Ryan, asked at a later event whether Trump was really a conservative, said: “Define conservative; he’s not my kind of conservative.”