Pence, Trump and the human tragedy at the heart of the election

In the VP debate, Mike Pence showed why he's on the ticket: he's a respected part of an establishment that will never let Trump in 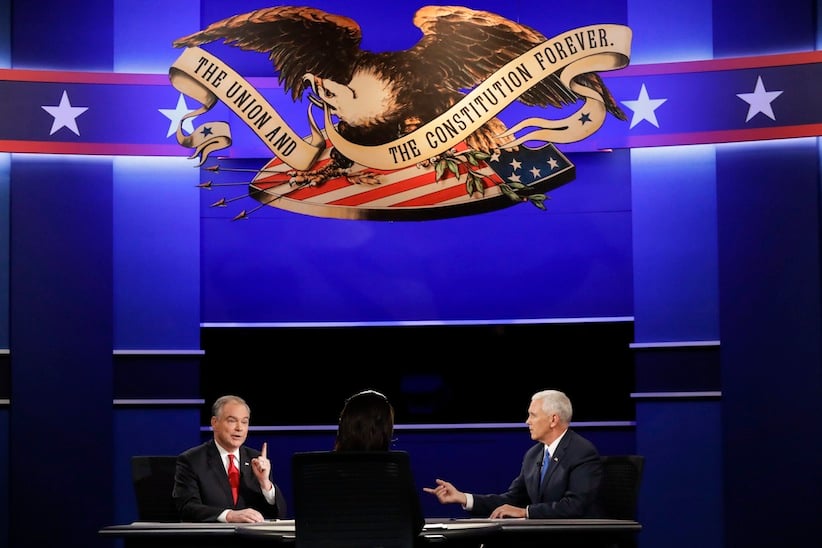 The U.S. presidential debate last month was the most watched in history. But odds are you didn’t tune into Tuesday night’s vice-presidential debate. In fact, you probably can’t even name the VP candidates. To be honest, it even takes me a minute to remember, and I’ve been playing close attention to this election.

The main tickets always overshadow the VP candidates. Occasionally one will attract relatively more attention, almost always for the wrong reasons. But this election they are being ignored even more than usual. Donald Trump and Hillary Clinton consume so much oxygen, their running mates have gone almost unnoticed. So this might be a good time to refresh our memories.

Clinton’s running mate is Sen. Tim Kaine from Virginia. As a Democratic politician, he’s straight from central casting: Harvard Law, long history of public service from city councillor to governor, he even chaired the Democratic National Committee. Being a reliable party man and a popular governor of a Southern state, he was on Barack Obama’s VP shortlist. He has the air of an affable schoolteacher.

Trump chose Gov. Mike Pence, from Indiana. Like his opponent, he has a long record of public service as a Congressman, and is well known and well liked within his own party. He is a supporter of the Tea Party movement, and pollsters at FiveThirtyEight rank him as “the most conservative vice-presidential candidate in the last 40 years.” In many ways he is the antithesis of Trump, coming off as thoughtful, reserved and well-reasoned. Many of his political views are at odds with Trump’s. For example, as an outspoken proponent of trade, he had to reject the Trans Pacific Partnership deal after being named VP candidate.

So those are the contenders. Now, why should you care? Of course, there is the possibility that one of them could become president. Nine vice-presidents have succeeded to the Oval Office, including three since the end of the Second World War. More importantly, they are the ultimate surrogates, providing clear insights into each campaign, and telegraphing the strategies and talking points that Clinton and Trump will roll out themselves in their next two debates.

That all being said, the VP debate, moderated by Elaine Quijano from CBS News, was a tedious affair and not especially enlightening. Scored on style, Pence was the winner. As a former talk-show host, he has the ability to deftly draw the audience in with stories. When Kaine would attack with stats and Trump quotes, Pence would deftly counter by chuckling, shaking his head, and responding with a sepia-tinted anecdote and some homespun humour.

In the other corner, Kaine engaged much more earnestly and doggedly, frequently cutting off the moderator, often when she was in the midst of asking his opponent hard follow-up questions. He was good, but he wasn’t as smooth, and couldn’t match Pence’s congenial disdain.

Unfortunately for Pence, he is running on Trump’s platform and Trump’s record. Which means that if the debate was scored on substance, Kaine ran circles around Pence. And how could he not? On six different topics, Kaine asked his opponent: “How can you defend your running mate’s position?” Each time Pence had no choice but to change the subject. Because, frankly, Pence can’t defend Trump’s positions. As an ideological Republican, he must see much of Trump’s behaviour and many of his policies as anathema. In many cases Pence resorted to rolling his eyes and insisting “Trump never said that” — when in fact, in every case, he did. There were a few occasions when Pence’s amiable and sensible tone achieved the seemingly impossible, making one of Trump’s outrageous positions sound almost reasonable. On immigration, for example, when Kaine raised the “Mexicans are rapists” speech, Pence scoffed and calmly insisted he was only talking about criminals and the perfectly obvious need to deport them without delay. If you had not heard it in the original Trumpese, you would nod and wonder what the fuss was about.

Many pundits have pitied Pence, considering him an apologist and lackey, chosen by Trump only because the candidate had to choose somebody, and once chosen, discarded and ignored. In fact, at the press conference introducing the Republican VP nominee, Trump began by speaking about himself for 28 minutes, before immediately leaving the stage when Pence appeared. But, watching him tonight, I wonder if perhaps Trump chose Pence for a more substantive reason. The two have nothing in common. Pence is deeply religious and abstentious; Trump is an unholy libertine. Pence speaks in paragraphs, Trump in punchlines. Pence has spent his life constructing a strict conservative ideological philosophy, while Trump makes it up as he goes along, often jumping from one end of the spectrum to the other in the same day. But most important, Pence is well-regarded within the political establishment and on both sides of the aisle, while Trump remains a ridiculed sideshow, an upstart mocked by even those he beat in the primaries.

I suspect Trump picked Pence because he hoped some of that esteem would rub off on him. Because he thought adding Pence to the ticket would make him part of the club, part of that establishment that has never let him in, no matter how much money he makes. That might be the doleful human tragedy at the heart of this election: the ambitious boy from Queens could make a billion dollars, become a TV star, run for president, and almost win — and yet still never earn any of that respect that is given so naturally to men like Pence.