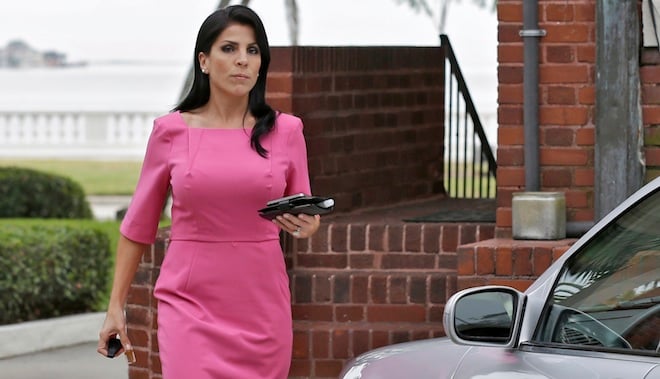 Petraeus will testify before Congress about Sept. 11 attacks on U.S. installments in Benghazi that killed a U.S. ambassador and three other Americans. Timing has not been decided.

At today’s White House press conference, President Obama said he has “no evidence” that national security was compromised by the scandal.  The president said he accepted Petraeus’s resignation Friday because “he did not meet the standards that he felt were  necessary” to be CIA director. When Obama was asked if he should have been informed before last Thursday that the FBI knew of Petraeus’s extramarital affair, he said the FBI and Justice Department have protocols about disclosing ongoing investigations: “We’re not supposed to meddle in criminal investigations.” Obama said he was “withholding judgment” on how the FBI handled the case, as he delivered a oblique jab with the word “generally,” saying:”I have a lot of confidence, generally, in the FBI.”

The Shirtless FBI Agent has been revealed: pics were “a joke,” says Frederick W. Humphries II.

There were also more stranger-than-fiction revelations that show just how much DC is a two-degrees-of-separation town. Paula Broadwell’s driver’s license was found by a jogger in Washington, D.C.’s Rock Creek Park. When it was discovered is unclear. The park is where Washington intern  Chandra Levy was found in 1992 after a year-long search. Judy Smith, the legendary PR maven now representing Jill Kelley also represented the Levy family. (Smith is the model for the central character of the TV show Scandal.)

Jill Kelley, or “socialite Jill Kelley,” as she’s now known,  called 911 several times over the last few days to complain to Tampa police about pesky press and public parked on her property, claiming she warranted special “diplomatic protection.” What’s stranger is she might have actually believed she deserves it: Foreign Policy reports the 37-year-old is “an ‘honorary consul’ of the Republic of Korea,” a symbolic appointment. (Her Benz’s plates read: “Honorary Consul,” which means now she must be referred to as “socialite and honorary consul Jill Kelley.”) The Washington Post reports that Kelley, who is of Lebanese descent, was a “go-between” between Central Command and Middle Eastern countries, whatever that means.

We’re also learning more about Natalie Kharwam, twin sister of Jill and a bankrupt Washington lawyer specializing in whistle-blower lawsuits. A DC judge declared Kharwam “unstable”  during her messy custody hearing, the one for which both Gen. Petraeus and Gen. John Allen provided letters claiming she was a good parent. There are details of Kelley loaning her sister  $800K  here. And, in perhaps today’s strangest twist, it was revealed the two sisters were on the Food Network in 1993  competing in “an alligator cook-off” with two brothers. There’s no video–yet. The Food Network is missing a big op here.

Then there’s revelations about Kharwam’s ex-husband, Grayson Wolfe, who has major connections to Iraq. Gawker.com reported  he’s a former Bush Administration flunkie who served in Iraq with the Coalition Provisional Authority and is now a partner in Akkadian Private Ventures, a D.C.-based private equity firm specializing in “infrastructure projects” in emerging markets.

The term “unpaid social liaison” to describe Kelley has finally been explained, sort of: it refers to the parties Kelley and her husband,  surgeon Scott Kelley, hosted for CENTCOM brass at their $1.2 million mansion.

In related news, the scandal has summoned musing on journalism code of conducts, specifically the requirement biographers reveal that they’ve bedded their subject,  here and here.

And to finish: the best Petraeus flowchart graphic which is now, with the revelation of “The Shirtless FBI Agent” already out of date.