Politician vs. Businessman in the U.S. debate 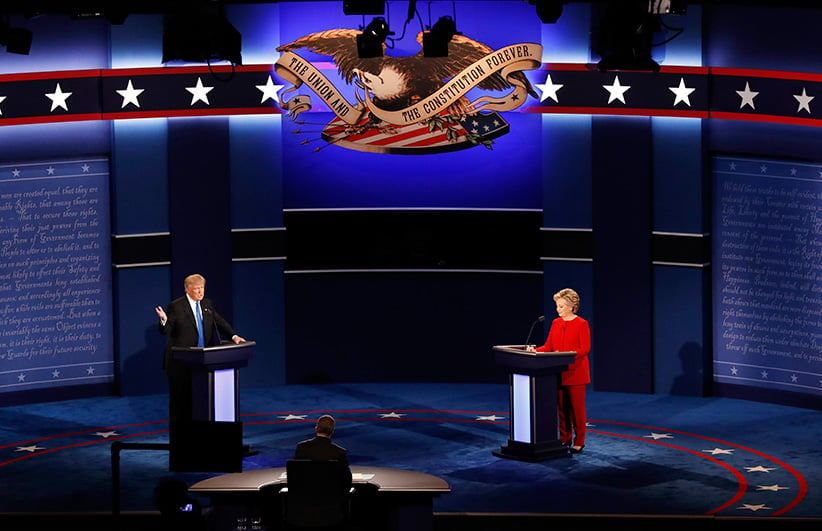 If there was one exchange from Monday night’s presidential debate the encapsulates the policy contrast between Hillary Clinton and Donald Trump, it was in this brief back-and-forth:

Trump: We’re a serious debtor nation and we have a country that needs new roads, new tunnels, new bridges, new airports and schools, new hospitals, and we don’t have the money because it’s been squandered on so many of your ideas.

Clinton: And maybe because you haven’t paid any federal income tax for a lot of years.

Trump: It would be squandered too, believe me.

Trump: US doesn’t have $ for roads, schools because money “squandered” by politicians
Clinton: Maybe because you haven't paid income tax pic.twitter.com/mIIhGCkFX4

In effect, Trump believes the government wastes tax dollars and would be better off getting out of the way for businessmen like him to create jobs and growth. Clinton, on the other hand, believes that government plays an important role in promoting growth and opportunity—and that everyone, especially the rich, should pay their fair share.

Their words are borne out in their policies, too. Trump’s platform includes major tax cuts for the wealthy, including a pledge to lower business tax rates from 35 per cent to 15 per cent. His argument is lower tax rates would encourage more companies to not only invest in their American operations, thereby spurring job growth on the home front, but also feeling less compelled to move their operations abroad. “The wealthy are going to create tremendous jobs,” Trump said.

Clinton, on the other hand, blamed trickle-down economics for the financial crisis of 2008-09, claiming America’s past experience with tax cuts didn’t translate into much investment for middle-class America. When Wall Street got too greedy, she said, everything fell apart.

MORE: Check out all of our coverage of the first presidential debate

So how would she go about easing the debt burden of college students and enhancing child care for new parents, as she promised? Make really, really wealthy Americans pay up; namely, singles with assets of at least $500 million and married couples with $1 billion-plus. That proposal to raise federal revenue at the expense of the country’s super-rich would mean levying a top tax rate of 65 per cent—a marked increase from Clinton’s earlier proposal of 45 per cent. “What I have proposed would be paid for by raising taxes on the wealthy because they have made all the gains in the economy, and I think it’s time that the wealthy and corporations paid their fair share to support this country,” she said.

Both candidates would agree that, as Trump said, the country needs “new roads, new tunnels, new bridges, new airports and schools, new hospitals.” But it also takes money to build all those things. Trump is a lifelong businessman who boasted during the debate that avoiding federal taxes “makes me smart.” Clinton is a longtime politician. The question for Americans is: Which kind of profession is better suited to lead the country?