Popularity of Donald Trump pinatas a scary sign for Republicans

Latinos describe Trump's talk of a wall, deportation and Mexican rapists as a national version of what happened in California in 1994 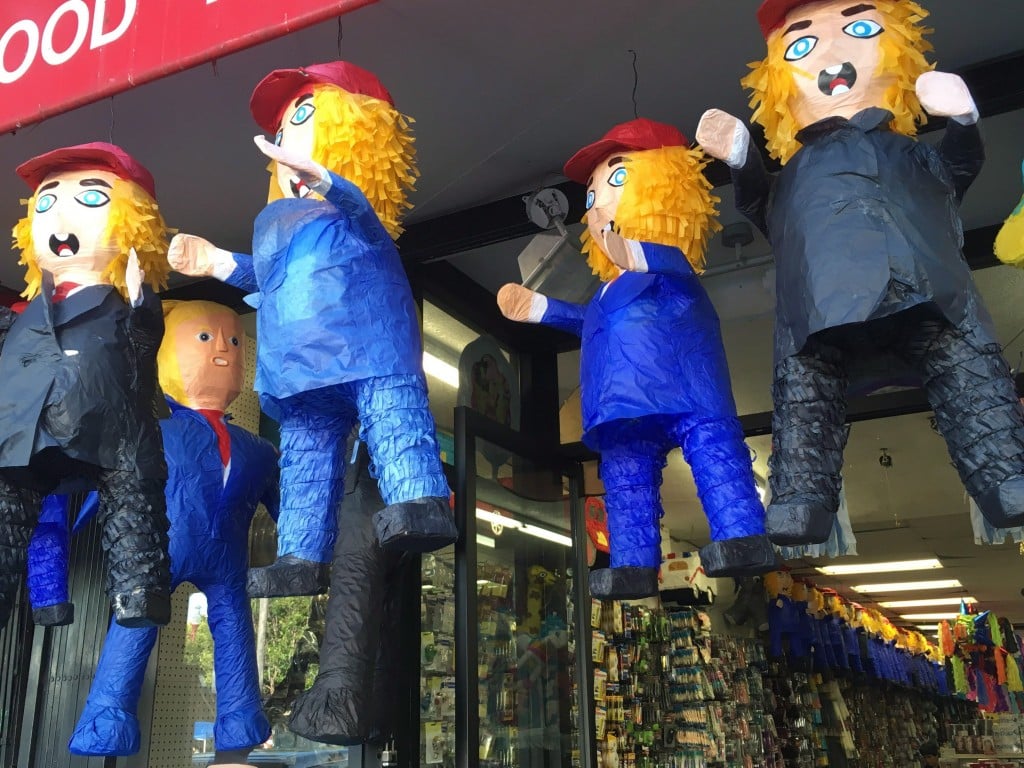 Donald Trump pinatas hang outside of Discount City, a general store in a Latino neighbourhood of San Francisco where they’re the top-selling pinata, on Sunday, May 29, 2016. THE CANADIAN PRESS/Alex Panetta

SAN FRANCISCO – People are lining up to beat the stuffing out of Donald Trump in one heavily Latino neighbourhood, according to the sales figures provided by pinata merchants.

Mohammed Shafi says he’s sold 7,000 likenesses of the power-tie-wearing, big-haired billionaire. He initially struggled to meet the demand and had to create a waiting list.

Kids entering his store tell parents they don’t want an elephant or a donkey – they want to knock the candy out of the candidate talking about deporting their friends and families.

“They say, ‘No, dad. I want this guy,”’ said Shafi, manager of Discount City in San Francisco’s Mission District, where he’s just ordered 180 more mini-Trumps from a Mexican supplier to fill his front wall.

It’s the same down the street. Another general store says the $14.99 Trump pinatas are also their No. 1 seller. And the hostility here to the Republican party isn’t limited to one nominee.

Some see California as a warning sign for the Republican party – a demographic canary in the coal mine, hinting at electoral fatality ahead unless it fixes its relationship with Latinos.

Many forget this was, until recently, a Republican-leaning state.

It voted Republican in nine out of 10 presidential elections before 1992. Since 1959, its governors were Republican as often as they were Democrats. In other words, a swing state like Florida and Ohio.

The Republican party campaigned against illegal immigrants in 1994. It embraced the Proposition 187 referendum initiative to strip school services for undocumented children. It ran ads with grainy footage of people running across the border, the narrator warning: “They keep coming.”

Its opinion hardened against Republicans. Now, Democrats get an automatic boost in presidential elections by the massive haul of electoral-college votes from the biggest U.S. state.

“It probably crystallized a level of opposition to the Republican party… in California that has proven to be quite lasting,” said Thomas Saenz of the Mexican American Legal Defense and Educational Fund, who campaigned against Prop 187. “Not just Latino voters, but other minorities.”

The referendum proposal won and was later invalidated in court. A debate rages over whether that initiative was the spark that scorched Republicans here.

One prominent political scientist says no. In his book, The Lost Majority, Sean Trende analyzes the Latino vote in California and finds it hasn’t moved much, remaining since 1988 within a range of 24 to 34 per cent for the Republicans.

“It is a bad misreading of the California GOP’s decline,” he wrote.

But he doesn’t dispute the demographic shift – Latinos have more than doubled their share of the vote in this state the last few decades, to an anticipated 25 per cent of California’s electorate.

The apparent impetus is Trump. His talk of a wall and deportation and Mexican rapists is described by Latinos as a national version of what happened here in 1994.

“This campaign has awoken a thirst for justice,” said Hugo Castro, who volunteers with the humanitarian group Border Angels, which drops containers of water in the desert to keep migrants from dying.

“The community is between some feeling fear, but most feeling anger. Both those emotions are very negative. … We have to change that toward … unconditional love and hope. But it’s very hard.”

Laird Bergad of the Center for Latin American, Caribbean, and Latino Studies at City University of New York cites what he calls “meteoric” growth: 15 million Latinos in the U.S. in 1980, and more than 55 million now; their share of the electorate grew from four per cent in 1992 to 10 per cent this year.

Their overall impact is diluted. That’s because nearly half those Latino voters live in non-competitive states – Democratic California and Republican Texas.

But he says they’re powering a shift in swing states. It’s most obvious in Florida, but they could also shape tight races in Colorado, North Carolina, Pennsylvania, Ohio and Virginia.

Next up is Arizona; he said it’ll become a swing state in 2020. Then the big prize: Texas. He predicted the country’s second-largest state will be up for grabs in 2024.

“Demographic increase has translated into a presence at the ballot box which is critical,” he said.

“You think the Latino vote’s going to be important in Florida this election? Wait ’til the next election, and the one after that. And Texas is going to go Democratic one day because of the Latino vote …

“So what’s (Donald Trump) thinking? Does he think, actually? Is there a thought process?”