Scott Feschuk looks into the future at the highs and lows of Trump's popularity, from a Putin slumber party to actually shooting a man on Fifth Avenue 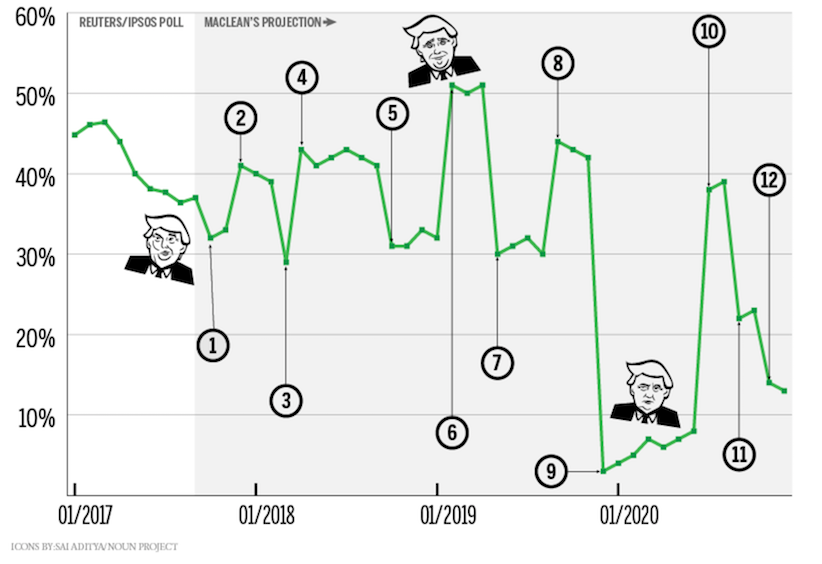 2. New press secretary Ivanka Trump refers to President’s foreign policy as “sophisticated and refined, much like this lace-trimmed crepe blouse from my Spring Collection, available now at Lord & Taylor.”

3. Donald Trump shoots man in the middle of Fifth Avenue.

4. Man turns out to be Sean Hannity.

6. In a stirring State of the Union speech, Trump brings Republicans to their feet by pointing out that, under his leadership, 38 of 50 states remain largely unaffected by nuclear fallout.

7. After Trump replaces the Department of Education with for-profit TrumpSkoolz, Fox News responds with a tough investigative report: The Energy Crisis of 1973 – What Hillary Knew and When.

8. Ninety per cent of all Americans now working in the coal industry.

9. Number seems low but remember – almost every member of Trump’s hardcore base would have been away from their phones for the official opening of possum hunting season.

MORE: Tweets from His Grace, Donald of House Trump, First of His Name

12. Trump wins 17 per cent of the popular vote in the 2020 general election—and a second term as president. The final tally:

Bill Clinton in a fake moustache and calling himself “Chet H. Chapman”: 7

Some guy who ran solely on the platform of “not being Michael Moore”: 4

Jill Stein because of course she would: 3

Eric Trump: 1 (accidentally put self on ballot when he filled out forms wrong for his father)