Scott Gilmore: The question around Trump's North Korea statement is not 'Will he do it?', but rather 'Why is he talking out of his arse?'

The President of the United States just threatened North Korea with “fire and fury like the world has never seen”. Given that this followed right on the heels of the troubling report the country has successfully miniaturized a nuclear warhead that could fit on its new intercontinental missiles, you would think this might be the time to panic.

After all, this is a man who reportedly once asked an advisor, three times in the same meeting, “If we have nuclear weapons, why can’t we use them?” Bellicose would not be the first adjective most people would use to describe the 45th president, but it would be in the top 10. As would “mercurial” and “unstable”. Time to head to the bunker?

If any recent president were to threaten another country with a nuclear strike, then, yes, this would be a terrifying moment in history. But, for President Trump, this is just a Tuesday.

In a CNN poll released today, 60 per cent of Americans don’t trust Donald Trump and see him as dishonest. That is surprisingly low, when you consider how almost nothing he promises comes to pass. He came barreling into office promising to kill Obamacare, wall off Mexico, make them pay for it, tear up NAFTA, bomb Iran, end Common Core, build a safe zone in Syria, reinstate waterboarding, cancel all funding to sanctuary cities and take no vacation while doing it. Six months later, he has accomplished none of this, and in some cases doesn’t even seem to be trying.

Nothing this man says can be trusted. And we haven’t even talked about his day-to-day lies. The Toronto Star’s Daniel Dale is sacrificing his sanity for the common good, and attempting to fact check almost every statement from the president, an exhausting and thankless public service that should earn him an Order of Canada. Dale’s tally is astounding. After 200 days in office, he has recorded over 500 lies. But that doesn’t even count the lies he repeats more than once. So, for example, in his recent interview with the Wall Street Journal, Trump dusted off a few old nose-pullers and mixed in some fresh falsehoods to reach a score of 26 lies in one sitting. 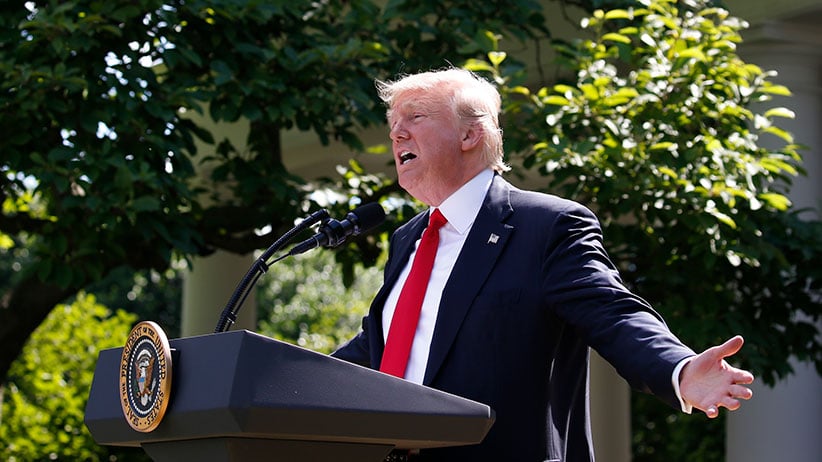 When Trump threatens a country the question is not “Will he do it?”, but rather “Why is he talking out of his arse?” I predict that in future memoirs of this president, a great deal of academic energy will be spent trying to figure out why this man lied so much, often about things that are both meaningless and easily fact-checked. To pick a random example from the last week, why did the president lie about getting a call from the head of the Boy Scouts, telling him that his was the “greatest speech ever made”?

I have a couple of theories. First, I don’t think we can overestimate how insecure he is as a man. It is telling that most of his lies bend the truth towards a grander picture of the president. He wants us to believe he is wealthier than he is; that he has bigger hands than he does; that his crowds are the largest; his speeches the greatest; his people the best. In all sincerity, I often wonder what happened to him as a child to create someone so desperate for approval.

The second thing we should consider is his lack of information. I suspect that many of his promises were sincere. He wanted to build a wall. He planned to immediately repeal Obamacare. Then he discovers the basic facts make these things impossible. “Nobody knew health care was so complicated,” he said. Nobody—except anybody who had an even basic understanding of the issue.

In the case of this latest threat, to rain “fire and fury” on North Korea, both of these factors are at play. Trump wants us to think he is tougher and more menacing than he is. He spent years mocking Obama, claiming the world was laughing at his “weakness”, and is anxious to be seen as a strong president in contrast. But, it is quite likely Trump has not had a normal briefing on Korea and isn’t aware that every military option to deal with their nuclear program has a very high likelihood of failure, according to the Pentagon itself. And would possibly result in the capital of South Korea, Seoul (sitting almost right on the North Korean border), being shelled into dust.

I know the threat of nuclear war is something we should never dismiss. But an outrageous statement like this should send people into the streets, not the bomb shelters. The man is unfit to be president. A fact he is finding increasingly hard to obscure.