The Battle of the Megaphone Men in Cleveland

U.S. political conventions attract a complex ecosystem of those drawn to spectacle, including entrepreneurs, protesters, pranksters, religious zealots and, perhaps the largest segment of all, weirdoes.

At the Republican National Convention, formal protest marches are happening at some distance from the venue. But an intersection just outside the main entry point of Quicken Loans Arena has quickly become a focal point for those looking to make a buck or change some minds.

On Monday, two men armed with megaphones (one was also packing a few plastic flowers) squared off in front of scores of onlookers. One man, in a Fear God hat, spoke at great length about how gays “and other sinners” are going to burn in hell for all eternity. He made it sound pretty bad. 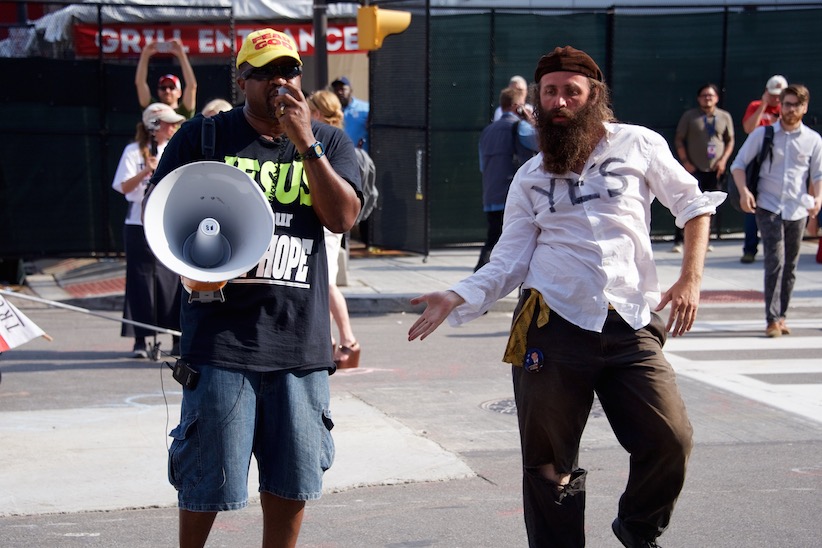 The other guy – who had written on the back of his shirt, “Love is the question” – kind of pranced around a lot and occasionally said something along the lines of, “No, they’re not going to hell, that’s dumb.” He also breakdanced for some reason.

“This fool is going to burn for sure,” Fear God Hat Guy said.

After 15 minutes or so, some dude with a “Socialism Sucks” sign joined in. It spoiled the vibe and the Battle of the Megaphone Men was over.