The Republican National Convention: Time for another video

Click here for my recap of Tuesday’s session at the convention. Warning: contains some Alabama.

First of all, let me just say it’s great to live in a world in which Mitt Romney has finally been humanized. They said it couldn’t be done! But thanks to the efforts of Mitt’s wife and sons, America now stands united in being reasonably sure that beneath the Republican nominee’s pragmatic, patrician exterior of space-age polymers beats the heart-like object of a man who was this week described by his oldest son as “pretty interesting.”

Now, onward to the second full day of the Republican National Convention:

7:10 p.m. ET Delegates watch a video that pays tribute to congressman Ron Paul, who attracted significant support during the presidential primaries. It features a dozen men, each older and whiter than the last, talking about how, his entire life, Ron Paul has never wavered, never changed his mind, never altered his world view, never seen anyone else’s point of view, never grown intellectually, never shared any of his gumdrops, never stopped hectoring the neighbourhood kids to get off his lawn. I may have made up a couple of those.

7:14 At the podium, Sen. Mitch McConnell becomes the latest Republican to make the case for American exceptionalism – the notion that the United States is “special,” and don’t you dare make a crack about how that word has two meanings, buster. “We are different,” McConnell says, slowly, so very slowly, so very slowly and blandly it’s as though a tea cozy had been anthropomorphized right before our eyes. “Not because of where we were born, but because of … what we have in here.” At this point, McConnell (slowly) places his hand over his heart. Or possibly over his wallet. It’s the Republican convention, so probably over his wallet. 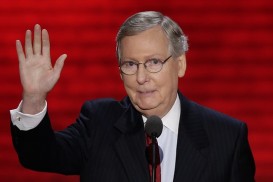 7:21 McConnell is still talking. At least I think that’s him talking. I definitely hear a noise like how oatmeal would sound if it had a mouth. He’s getting to his point, I think. Yep, definitely getting closer. Here it comes! He breathes deeply and says: “The only way to fail in America is to quit.” Sure, several investment banks, most Baldwins and the Chicago Cubs are just a handful of the countless entities that prove McConnell’s theory wrong, but delegates wisely choose to just applaud politely and hope he stops. He stops.

7:22 Jack Blades performs! Landing a rock performer of the calibre of Jack Blades raises a number of important questions, such as: Who? Apparently, Jack Blades was in Night Ranger. So there’s that. Now he sings the kinds of songs that sound like Sammy Hagar songs, but terribler. Bottom line: if this election were decided by a presidential candidate’s ability to attract marquee musical acts, Obama would win by the margin of all the votes in the entire country to zero votes.

7:29 Sen. Rand Paul, son of Ron Paul, addresses delegates. I’ve not heard him give a speech before so I’ll give him the benefit of the doubt and assume he left his charisma in his other jacket. Paul goes on for quite a bit about how he disagrees with the Supreme Court and, to this day, still thinks Obamacare is unconstitutional. So for those of you scoring at home: on one hand there’s the view of some senator guy from Kentucky who until a few years ago was an ophthalmologist; and on the other hand there’s the opinion of highest court in the entire country – with judges on it and everything. Let’s call it a draw.

7:47 Time for another video – this one featuring a nice interview with presidents George H. W. Bush and George W. Bush, who were filmed sitting next to one another on a bench. There are some fond reminiscences. There are a couple funny stories. At last, the talk turns to the current Republican nominee:

George W. Bush: “There’s no doubt in our mind that Mitt Romney will be a great president.”

There is an awkward pause. W. turns to look at his father. And here is all that the 41st president of the United States can muster:

Probably not worth printing that one on the pamphlet, Romney campaign.

8:01 It’s John McCain’s turn to speechify. He speaks of the “consequential choice” facing America in the coming election. And really, who better to offer guidance at this critical time than the man who, when faced with his own consequential choice, pounded his fist on the table and declared: “I choose the pretty lady who can see Russia from her house!”

McCain goes on to assure Republican delegates that the United States is still really popular around the world. “People don’t want less of America. They want more.” In McCain’s defence, this is probably true if he’s referring to the parts of America that make up Scarlett Johansson. 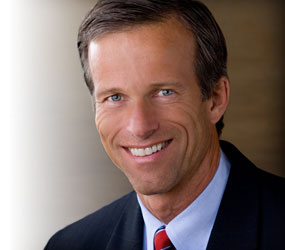 8:32 John Thune, senator from South Dakota, gives a speech about something or other but I’ve got to be honest – I took one look at his hairdo and his jaw line and I’m like: What the hell? If you’re a handsome, toothy man in America, do the Republicans just come for you at some point in your youth? Do they lock you away, indoctrinate you in the fundamentals of their conservative ideology and give you a complimentary tin of pomade? THIS IS THE FIFTH GUY SO FAR WHO’S LOOKED EXACTLY LIKE THIS. It’s uncanny. Conversely, if you suddenly grow a whole bunch of skin tags right on your face or something, do they just throw you out of a moving, unmarked van, saying: “Sorry, son ­– you’re not the governor of Virginia anymore.”

8:41 A guy from a pipeline company just opened his remarks with the words, “Energy powers everything we do.” Rejected openings for his speech included, “Matter is everything that has mass and volume” and “Blueberries are delicious.”

8:55 One of the great things about listening to the house band at the Republican National Convention is remembering that, oh yeah, mute button.

9:00 Rob Portman, a senator from Ohio, claims Mitt Romney made his money “the old-fashioned way.” Wait, Mitt Romney had sex for money? That seems like it should be a bigger story. Portman goes on to fulfill the contractual obligation of every speaker the Republican National Convention by using slightly hushed tones to mention the American Dream: “I’ve seen that dream up close,” he coos. Yes, but we need to know: was it shaking Rick Santorum’s hand?

9:17 Gov. Luis Fortuno of Puerto Rico gives a passionate address, but he’s run up against a certain fatigue that’s set in on the floor. Even for hardcore Republicans, there apparently are limits to the number of times one can enthusiastically cheer Barack Obama being called a traitorous dickweed.

9:22 Just a quick thought on one of the songs that the house band keeps playing. It may have seemed like a savvy decision back in the 1980s but in hindsight I think we’d all agree that, in the end, it was a mistake to build this city on rock and roll. No one can get any sleep and the whole place smells like John Mayer’s bong water. And now the city is sinking and we’re shoulder deep in the hoopla. It just never ends.

9:31 Tim Pawlenty, former governor of Minnesota, arrives with a smile on his face, a song in his heart and roughly 14 too many “jokes” in his mouth. “I’ll give Barack Obama credit for creating jobs – for golf caddies.” Be sure to catch Pawlenty, Portman, McConnell and Thune as they tour America this fall as the Monsters of Bland.

9:39 Mike Huckabee: “It’s not because we’re Republicans – it’s because we are Americans that we proudly stand with Mitt Romney and Paul Ryan.” Actually, I’m pretty sure it’s because you’re Republicans. And also because the 84 other people that you, as Republicans, at one time seemed to prefer over Romney as your 2012 nominee ultimately turned out to be incompetent, deranged or batshit crazy.

9:55 Condoleezza Rice, the former Secretary of State, opens her speech by recalling the moment at which she was informed of the 9/11 attacks. Two things about that:

1. I thought for sure that, even as she was saying the words, Rudy Giuliani would burst from the wings of the stage, hit her over the head with a chair, grab the microphone and declare, “Talking emotionally about 9/11 is MY thing.”

2. It’s a pretty interesting gambit to being one’s high-profile remarks by reminding one and all: “REMEMBER THE SINGLE GREATEST FAILURE OF MY PROFESSIONAL LIFE?? Let’s dwell on that!”

Rice’s speech, like most addresses that have a partisan mission, is highly delusional in places, especially on Iraq, where she clings to the Bush line about how invading a country that had nothing to do with the terrorist attacks made America safe from terrorism. (She also assails America’s fiscal position without so much as acknowledging the staggering cost of the Iraq war.) But as a piece of rhetoric, the speech is well argued and superbly delivered. Its partisan swipes are clever rather than crude. It is good enough that on TV, everyone immediately starts talking about Rice as a potential frontrunner for the Republican nomination in 2016. Back in his hotel room, Mitt Romney says, “But hang on, in 2016 I’ll be running for my second term as – oh.”

10:18 Susana Martinez, the Govenor of New Mexico, speaks of guarding the parking lot on bingo night at the Catholic Church as an 18-year-old woman – all while carrying a .357 Magnum. “The gun weighed more than I did!” The crowd goes crazy! It’s funny because it’s excessive and potentially deadly!

10:27 Time for the evening’s featured performer: Paul Ryan, the Republican congressman from Wisconsin who, earlier this month, was picked by Mitt Romney to serve as his vice-presidential nominee. This is a man in such tremendous shape that his best bet in the debates would be to challenge Joe Biden to a shirtlessness contest – a strategy that will be made simpler by the fact that that’s how Biden is likely to show up anyways.

Through no fault of his own, Ryan appears almost absurdly young and eager on the massive Republican stage. I mean so young that he looks as though he’s just come from hanging around at Arnold’s and saying things like, “You still got it, Fonz!” Still, it’s a big night for him, so I’m going to cut him some slack for being late in delivering my paper. Toward the end of his address, an emotional Ryan will speak of his mother’s presence in his life and declare, “My Mom is my role model.” She is likely also his ride home.

It quickly becomes clear that Ryan has a few curious speaking habits. First, he repeatedly makes a weird little sound while delegates are applauding his remarks. It’s like a cross between a clearing of the throat and the grunt that some people make when they serve in tennis. Second, he frequently stares directly into the camera, during which time his eyebrows arch, his chin lowers and his blue eyes open wide. Each time he does it, you swear he’s about to say, “There are eight of you ladies, but I have only three roses. THIS IS THE HARDEST PART OF BEING ON THE BACHELOR.” And third, when people cheer his attack lines, Paul Ryan smiles with the satisfaction of a boy who’s just touched his first boob.

Factoid: During the opening moments of his speech, Ryan became the 9,875th consecutive male politician to describe his wife as his “best friend.” Just 125 more and  there’ll be balloons, confetti and cake!