Jones hopes to be the first Democrat elected to the Senate in a quarter-century. His hopes may rest on African-American voter turnout. 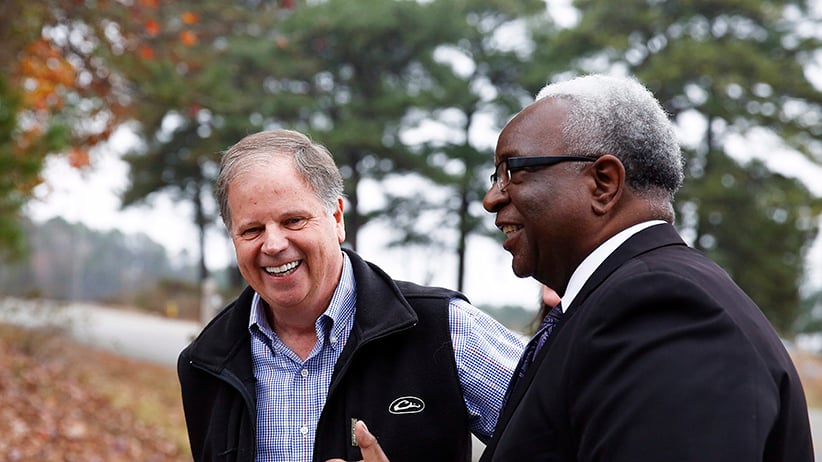 The exact location is a brew pub hard by the railroad tracks downtown, just off a boulevard named for Lurleen Wallace, George’s wife, who took over the governorship of Alabama in 1967 after her beloved, despised husband was term-limited, and before he took the politics of the forgotten, Southern, rural white man national—“Segregation now, segregation tomorrow and segregation forever!”—only to be shot at close range and disabled for life by a deranged young presidential campaign staffer at a strip mall in Maryland in 1972.

Already on this day, Tuscaloosa has known one happy outcome—the designation of the scholar-athletes of the University of Alabama’s football team to compete in this winter’s four-team national-championship playoff, despite a late-season loss to intra-state anathema Auburn that had ‘Bama on the bubble.

“The only poll numbers that I’ve seen today are Clemson and Georgia and Oklahoma and Alabama, and I’m happy with those numbers,” Doug Jones is saying, in front of a pyramid of shiny kegs, just a couple of miles from the ‘Bama campus, straining to ally his own prospects with those of the Crimson Tide. Jones, 63, white, balding, and looking exhausted but intrepid after nearly a dozen speeches in one day, is the Democratic candidate for the United States Senate in a special election to be held in Alabama on Dec. 12. His opponent is Judge Roy Moore, the pistol-packing apostle of the Ten Commandments who, it has been alleged, in his younger days repeatedly failed to obey the Eleventh: Thou shalt not covet thy neighbour’s daughter.

“Alabama, you got the weight on your shoulders that’s breaking your back,” sang Neil Young, back in George and Lurleen Wallace’s day. And now, again, the light shines on the Heart of Dixie, with millions of out-of-state dollars pouring into attack advertisements and the East Coast elites declaring this contest to be the most impactful and portentous ever waged, until the next one.

“Roy Moore has been an embarrassment to the State of Alabama,” Jones, a former U.S. Attorney and a Bill Clinton appointee, declaims at the brew-pub rally, attended by barely sixty voters despite the allure of hand-crafted ales and gratis BBQ. “I’ve never been kicked out of office. I’ve never got myself aligned with an extreme religious group out of Texas that says women should not hold office. I don’t care to have Steve Bannon on my resume.”

(Webmaster Bannon, the enabler of right-wing, white-skin rebellion and the maker of a president, is due to appear with Roy Moore tonight at a farm outside Mobile—the same spread where, in September, the twice-expelled state chief justice brandished a gun to demonstrate his first-rate ardour for the Second Amendment.)

Opinion polls on topics other than college football have the Senate race very close, if opinion polls can be trusted at all after Donald Trump took the politics of the forgotten, Southern, Pennsylvanian, Wisconsonite, rural white man national—“the forgotten men and women of our country will be forgotten no longer,” he pledged on inauguration day.

Indeed, the Donald has brought his own Big Mac-filled weight to bear in Alabama, endorsing Roy Moore, dismissing Doug Jones as a Chuck-and-Nancy, soft-on-crime, panty-waist, wasted-vote liberal, and coercing the Republican National Committee into abandoning its earlier abandonment of The Judge as a foul blot on the party who would make things so much better if he would just go away.

But Judge Roy Moore is not going away, and so the election may turn on African-American voter turnout, which never is very high in this state without an Obama on the ballot, and which is likely to be even lower two weeks before Christmas. Jones also may score the votes of white Republicans who reject Roy Moore as passionately as Roy Moore abjures the Muslim and the Buddhist and the homosexual.

So, the day before his appearance at the brewery, Doug Jones walked with Santa Claus across the Edmund Pettus Bridge in Selma, where hundreds of unarmed men and women parading for civil rights were clubbed and gassed by police in 1965, and his campaign flyers show him amicably conversing with black people in front of the 16th Street Baptist Church in Birmingham, and it was Jones himself—as he reminds every audience that comes to hear him—who helped to prosecute two of the Ku Klux Klansmen who bombed that church in 1963 and put four little girls in their graves.

At the hofbräuhaus in downtown Tuscaloosa, about half of the attendees are African-American, and among them is a man who smiles, in greeting, “You’ve heard of the poet Robert Burns? Well, that’s me.”

Mr. Burns, who goes by Bob, is a Tuscaloosa native, a retired engineer, a member of the board of directors of a local bank, a graduate of the University of Alabama—just after it was desegregated by federal edict despite George Wallace’s pledge to “stand in the schoolhouse door” to prevent black students from entering—and old enough to remember when the Klan blew up that house of prayer and killed those sweet children who had come only to learn about Roy Moore’s constant companion, Jesus Christ.

“How do you explain Judge Moore?” he is asked.

“I don’t think he can be explained,” Bob Burns answers. “I think he needs to go to jail for the things he’s done. A know that a lot of it went on in the period when he lived, but it’s not excusable at all. Those women will be scarred for a long period of time.”

Mr. Burns’s history is accurate, especially across the Southland and the Country Music Hall of Fame. Loretta Lynn of Kentucky was married at 15 to a man who was 21. Jerry Lee Lewis of Louisiana was 21 when he wed his 13-year-old cousin, once removed. But Roy Moore was in his thirties when he watched and wooed—and allegedly assaulted—cheerleaders half his age up in Gadsden, Ala. Moore denies all improprieties, says he never met the women who still possess his autographs and Christmas cards, and his campaign archly retorts, “If you are a liberal and hate Judge Moore, apparently he groped you.”

“I don’t think the Lord Jesus could win as a Democrat in Alabama,” a political consultant in Mississippi told the New York Times the other day, but Doug Jones would seem to have as good a chance as any mortal, pro-choice man of pro-abortion whose values would place him in the mainstream in Rhode Island or Minnesota. So a wanderer heads down into the Black Belt, looking for the voters who might carry him to victory.

(For decades, the opposite was true. When Lurleen Wallace ran for the governorship in 1966, no Republican had gained that office since 1874. But Lyndon B. Johnson’s Voting Rights and Civil Rights Acts flipped the Solid South from blue to red, and crimson-red it has remained.)

Alabama’s Black Belt was so dubbed centuries ago for its fertile soil; down here, the cotton fields that once were tended by back-broken slaves now await their mechanized December harvest, spreading flat and wide above the Alabama River, as white as a prairie snowfield. But the name also connotes the community that forms the vast majority in the majority of its counties. Southwest of Birmingham and tucked against the Mississippi state line, the Black Belt encompasses the poorest chunk of territory in America’s sixth-poorest state.

It is not a tourist mecca, nor a vale of evident prosperity. You could make a fine coffee-table book of photos of abandoned gas stations in Sumter, Marengo, and Greene Counties, of dead deer and collapsing old houses; you could snap the pictures as you drove along the back-ways, meeting few and seeing little except logging trucks, and feed lots for Charolais cattle, and signs that say MUD ON ROAD.

In tidy little Livingston, a college town and the Sumter County seat—median income, US$13,000 per year—a man named Herman B. Ward, Jr., sits behind his desk at the local weekly newspaper and says that poverty “is a way of life for people of this area. It’s par for the course to say that it’s a poor area just because it’s always been a poor area. It’s Mayberry around here.”

Across the street from the offices of the Sumter County Record-Journal is the courthouse, and behind the courthouse is a monument to the Black Belt white boys who fell in the War Between the States. Johnny Reb in bronze stands watch at the top of the column, and at the base are the words OUR CONFEDERATE HEROES, though in a county that is 73 per cent black, the word OUR begs a narrow definition.

“It’s the Bible Belt,” Ward says, and he notes that there are a few beacons of success among the want and surrender: “you’ve got fine homes in the half-million-dollar range, and mobile homes that might cost fifty bucks.”

Mr. Ward does not vote—ever—as he feels that this would stain his journalistic impartiality, but, in what perhaps is a faintly disguised allusion to Judge Roy Moore, he says that, “The people who present themselves as the most religious often have skeletons in their closets. But that’s not to say that those who don’t, don’t.”

If poverty breeds apathy, and apathy feeds poverty, and even college kids don’t care enough to vote, Sumter County may have a long way to go. Doug Jones would strive to lead it upwards, to make Alabama a state worthy of confidence and investment, but this will not be an easy tide to roll.

“Everywhere, we go, people say, ‘We’re praying for you, Doug, praying for the state,” Jones said up in Tuscaloosa. “But prayer can only get you so far.” And he quoted Congressman John Lewis, whose skull was cracked open on the Edmund Pettus Bridge, saying, “When you pray, move your feet!”

In Livingston, Alabama, a traveller shuffles over to the courthouse, where the ballots will be marked and counted, seven days from now.

“What kind of turnout do you expect from African-Americans here?” one asks Ms. Willie Pearl Watkins-Rice, who is the county’s elected Judge of Probate.