Russia's Facebook memes have been revealed, and politics will never be the same

One photo, less than 1,000 words: Learning about Russian-backed Facebook groups could bring about difficult questions about our political reality 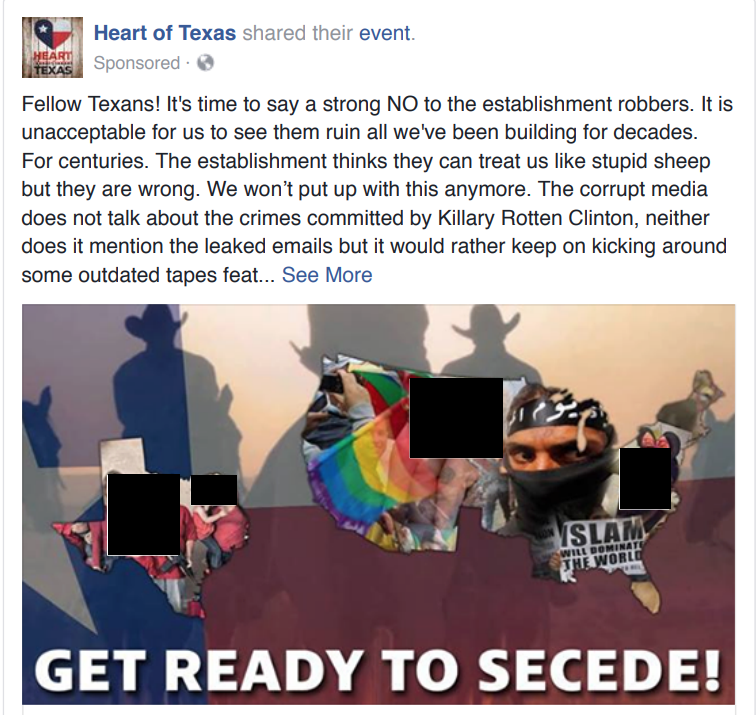 And so we meet the memes again, on the other side of the election they were apparently designed to influence, and via members of the U.S. House Intelligence Committee, who released a handful of them to the public this week.

Some of the memes and images were purely political: one of Bernie Sanders portrayed as a buff bodybuilder, for instance; another describing a young black man allegedly trying to prove that Bill Clinton was his real father; and yet another that encouraged people to agree that Hillary Clinton ought to be disqualified from running for president.

Earlier this fall, we learned that some of the 3,000 ads purchased by a Russian troll farm on Facebook weren’t necessarily aimed at supporters for a specific candidate; some were merely designed to inflame divisions that already existed within American society. And sure enough, the committee members released some of those as well.

Two groups—one broadly aimed at conservatives, the other at liberals—are of note. The first is called Heart of Texas, which mostly promoted Texan secession. The second is something called United Muslims of America. One of the images released this week showed a post by that group portraying a woman in a hijab standing next to Hillary Clinton, and the text: “Support Hillary. Save American Muslims.”

Rather than simply sit back and create Facebook groups and shareable content, the Russians also reportedly promoted and encouraged Facebook users to attend rallies supported by these sham groups. At least 60 events across the U.S. are reported to have been created in this manner, and perhaps as many as 100 activists were also reportedly offered money to organize and attend.

This is how it came to be that Facebook followers of both Heart of Texas and of United Muslims of America met on Travis Street in Houston on May 21, 2016—”a scene,” the Texas Tribune reported Thursday, “that appeared on its face to be a protest and a counterprotest.” As the Houston Chronicle described at the time, Heart of Texas had encouraged its followers to bring firearms. One man named Andrew Gomez turned up with an AR-15 assault rifle slung over his shoulder.

That the pro-Muslim crowd eventually dwarfed the Heart of Texas crowd on the other side doesn’t really matter in the end—or perhaps at least not as much as it seemed to at the time. What matters is what was ultimately achieved: psychological chaos.

Perhaps it is time to entertain the idea that, far from being worried about the Americans uncovering what they’ve been up to, Russia feels exactly the opposite about the probe into its alleged meddling in the foundations of U.S. democracy—right down to its simplest expression, a protest. The goal of Russia’s interference was systemic disruption. Awareness that Russians—or whoever else—can create genuine tension on American streets from afar, with nothing more than a social media app is not only profoundly, if subversively, disruptive to the target audience, it also deepens the general air of mistrust that has been already created by viral misinformation.

Far from strengthening people’s resolve in defending legitimate democratic action, realizing how easy manipulation can occur will instead undermine the system even further. Imagine being someone who attended one of those duelling rallies. Would you still feel the same way about your initial motivations for being there? Would you still feel good about the ideas you defended? Or would you feel like you were used – that you were an actor in someone else’s play you had no idea was being crafted?

This is what people will think about in the future.

The very idea of agency, key to the concept of democracy, is suddenly upended, as everyone wonders: what are we really doing here?

Forget about fake news. Fake news is over. Psychologically, we are entering much more frightening territory. This is how the fourth wall of politics and society is broken, and how an alternate cultural reality is created. Things may never be the same.