As a Sanders supporter herself, Silverman said she would now vote for Hillary Clinton “with gusto” as she continues to be “inspired and moved to action by the ideals set forth by Bernie, who will never stop fighting for us.”

She spoke on the convention’s opening day just before Paul Simon stood at a microphone and crooned the Simon and Garfunkel classic “Bridge Over Troubled Water.”

Singer Demi Lovato got personal at the podium, touching on her struggle with mental illness, including eating and bipolar disorders. She urged an end to the stigma of those afflicted and called on politicians to support better access to health care for all. 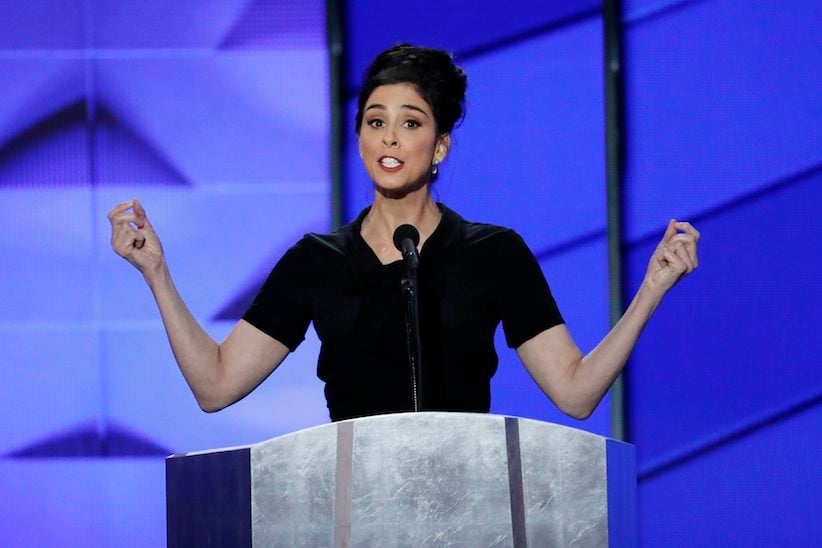 “Like millions of Americans, I am living with mental illness,” the 23-year-old Lovato said. “But I am lucky. I had the resources and support to get treatment at a top facility. Unfortunately, too many Americans from all walks of life don’t get help, whether they fear the stigma or cannot afford treatment.” Lovato closed with a performance of her hit “Confident.”

Longoria, a Latina from a small town in south Texas, said she is ninth-generation American from a place once owned by Mexico.

“My family never crossed a border. The border crossed us,” she said, adding: “When Donald Trump calls us criminals and rapists, he is insulting American families. My father is not a criminal or rapist. In fact, he’s a United States veteran.”

Actor and activist Danny Glover of the “Lethal Weapon” film franchise addressed the convention’s black caucus, describing Trump as a fascist and urging caucus members to “listen to new voices that demand speaking truth to power.”

Glover and actresses Shailene Woodley and Susan Sarandon joined more than 1,000 people for a climate rally, vowing to keep up the fight on environmental issues even though Sanders, their preferred presidential candidate, would not be in charge. Woodley urged Sanders supporters to remain calm and Sarandon thanked him for “igniting this spark.”

Boyz II Men performed on the convention stage, while Grammy winner Alicia Keys, who founded a social justice organization called We Are Here, appeared on a panel on criminal justice reform and civil rights.

Asked about remarks Hillary Clinton made as first lady about urban gangs with “super-predators” _ which she later walked back _ Keys said: “It’s obvious that that was a big mistake. … If we can admit to our mistakes, that’s the beginning, and the question is not only just admitting to the mistake but what are we going to do about it.”

Actresses Lena Dunham of “Girls” and America Ferrera of “Superstore” were among the notables to attend a bash hosted by Glamour magazine.