Sean Spicer has resigned as White House press secretary. But it's too late for him, and it won't matter in Donald Trump's administration 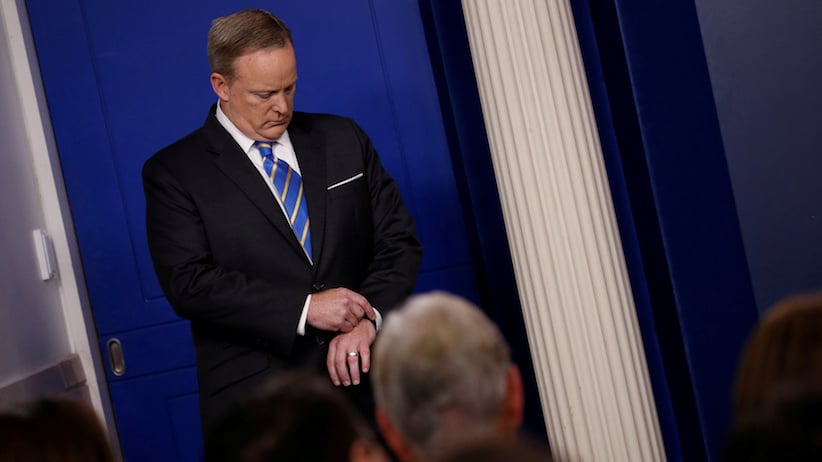 White House Press Secretary Sean Spicer checks his watch before taking the lectern for his daily briefing at the White House in Washington, U.S. May 15, 2017. REUTERS/Jonathan Ernst TPX IMAGES OF THE DAY – RTX35ZZD

Given my past criticism of Sean Spicer for not resigning on his first day as White House press secretary, it would be disingenuous for me to welcome his decision to quit six months into the gig.

After half a year of serial lying and bruising confrontations with the White House press corps, Spicer announced this afternoon he is standing down. Did he suddenly find his conscience? Haha—no. He just didn’t like the guy Donald Trump wanted to install as his boss, Anthony Scaramucci, the new White House communications director.

Here I have some sympathy for Spicer. Love him or hate him, he’s a comms guy who knows his Congress from his executive branch. Scaramucci is a Long Island entrepreneur and former Goldman Sachs investment banker with zero political experience. It’s shoving a square peg into a round, lying hole.

What the heck does Scaramucci know about communications? Who the heck knows—but he’s the president’s friend, and with this president that seems to be all that matters. That Scaramucci got three CNN reporters canned is gravy. Based on the first briefing-podium performance from “the Mooch,” his main skill is ramming his nose up the presidential rump, not speaking truth to Trump’s power. And that’s all that Donald Trump wants: someone to go on television and run into the many walls he’s struggling to build, and get good ratings while doing it.

Nobody knows anything about how Scaramucci will run his shop, but no one should expect anything to change when it comes to relations with the press. The president is still the president. As long as he keeps lying out of both corners of his mouth and tweeting willy-nilly, the communications director will be useless. The same goes for new press secretary Sarah Huckabee Sanders.

This president has no interest in a proper give-and-take with the press whose job description includes holding his administration to account. This won’t change no matter how well Scaramucci does the fandango with the White House press corps.

Anyone capable of fogging up a mirror knows it’s an impossible task, which could be why a number of seasoned press operators reportedly turned the gig down.

Trump is too undisciplined to stick to a message and too full of himself to accept counsel. He asks his staff and surrogates to debase themselves and then shows no compunction when he then hangs them out to dry.

This was evident from day one of the Trump presidency, when he asked Spicer to go out and lie to the press about the size of his inauguration crowd. If the President is going to make you lie about matters small, he won’t hesitate to make you swallow bigger whoppers. And so it’s proven to be with Spicer.

Sadly for Spicer, freeing himself from the West Wing won’t remove the taint from him. The only way he could have restored his previously solid reputation in Washington circles would have been to resign on principle and slam the administration for its corrosive approach to the press. But Spicer is too much of a professional to burn the hand that fed him and is—at least so far—playing nice on the way out. Still, he’s probably headed for a perch on Fox News.

The best you can say about Spicer’s reign is that he survived, even if he is covered in third-degree burns and is missing his soul. Manning the post of press secretary is hard in the best of times, and nigh on impossible under a president as bent and chaotic as Donald J. Trump.

The only consolation for Spicer will be that no one will do the job better. Scaramucci and Sanders will flame out even more spectacularly when the time comes.

One imagines Spicer will tonight be sipping a cold beer as he dreams of gainsaying their performance on TV. It’s hard to imagine too many others who will fight for him after his sordid showing in the most high-profile communications job in the world.