'America's present need is not heroics, but healing; not revolution, but restoration' said Warren Harding. The parallels to today's campaign are remarkable. 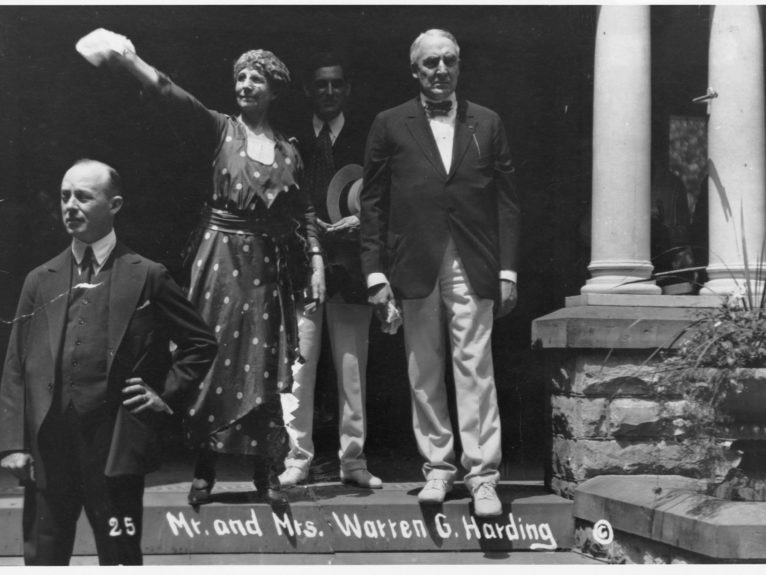 Harding and his wife Florence on the front porch of the Harding house in Marion, Ohio, from which Harding conducted his campaign for the presidency (Library of Congress/Corbis/VCG via Getty Images)

It is the first United States presidential election since the beginning of a global pandemic that has seen the death of hundreds of thousands of Americans. Doctors have confirmed that the current president is sick. Racially-charged demonstrations have recently taken over major cities. The perceived front-runner has been campaigning, mostly from his own home, on a message of a “return to normalcy” after years of chaos.

Much has changed in 100 years. History has not exactly repeated itself. Scenes of early 20th-century politics seem in turn quaint, foreign, backwards and intensely problematic in the modern context. Take, for example, the electorate. The major sea change, in 1920, was that women had very recently been granted the right to vote; the first woman ever elected to Congress had arrived on the scene just three years earlier. Black disenfranchisement was widespread.

But the farther we delve into that fateful campaign, the more parallels with modern-day electioneering seem to emerge. So, let us take a look at them. Hindsight is 2020, after all.

The president was sick—and unpopular.

Wilson was sickly throughout the last year of his second term in office. He had become quite an unpopular figure, chiefly for having brought the United States into the First World War after promising he wouldn’t. Although Wilson wished to cling to power and run for a third term, his stroke made it untenable. Democrats chose newspaperman James M. Cox to replace their incumbent on the ticket. His vice presidential pick: Franklin D. Roosevelt, then just 38 years old.

A global pandemic had claimed hundreds of thousands of lives.

But by 1920, there was little discussion of health policy that could prevent a future pandemic. The man who would become the Republican nominee, Warren G. Harding, had been one of two sitting U.S. senators to propose that Congress spend a “modest” amount on research into the flu, reports The New Yorker.

It was the unjust death of an African-American teenager in summer 1919 that sparked one the deadliest riots leading up to the 1920 election. The teenager drowned in Lake Michigan after a group of white kids stoned him to death for violating the unofficial segregation that made him an unwelcome visitor at the beach. (They went unpunished.) A week of riots killed several dozen people, injured hundreds and led to the torching of the homes of 1,000 Black families.

Conflicts across the country around that time are described in historical texts as ones in which Blacks began fighting back against white attacks in earnest. Still, racial violence had such “dailiness” in 1920, per the New Yorker—with lynchings in Minnesota, Texas, North Carolina, Mississippi, Florida and elsewhere during the campaign—that it “was perceived as being more inevitable than eventful, something that required an occasional word from the candidates without anybody believing it would seriously affect the election.”

Fears of a radical left were on the rise.

Adding to the catastrophes of the time was a series of anarchist bombings that began in 1919, waged by followers of an Italian anarchist, Luigi Galleani. Mail bombs sent to politicians in April 1919 largely failed to reach their targets, though one intended for a senator injured his wife and housekeeper. Another series of bombings, which targeted politicians for waging class war, was attempted in June. In 1920, the same group was believed to be behind a successful bombing that killed 38 people on Wall Street.

Coupled with large, sometimes violent demonstrations by the labour movement at around this time—and worsened by viral conspiracy theories around the Bolshevik origins of race riots, plus a growing anti-immigrant nativist movement—this contributed to a growing fear of left-wing extremism later labelled the “First Red Scare.”

Did we mention natural disasters?

Ah. Yes. Right. There was also the “1920 Tornado Outbreak,” as labelled by the National Weather Service. Though estimates of the death toll vary, a string of tornadoes on Palm Sunday in 1920 killed upwards of 200 people.

The opposition party challenger was chosen because he was vanilla.

Whoever became the Republican nominee for president was considered a shoo-in given the unpopularity of the then Democratic government. But the man elected to that position, who would win the election by a landslide, was not a front-runner.

Harding, a former newspaperman like his opponent, had served in the Senate and was well-known to party higher-ups, having played poker with most of them, per the Miller Center at the University of Virginia. He was also better-looking than his opponents, and had an unproblematic record, having chosen not to oppose suffrage or prohibition. He won the nomination on the 10th ballot, the “best of the second-raters,” according to then-Senator Frank Brandegee.

A campaign for “normalcy” appealed to an exhausted public.

Harding summed up his approach in the most-cited speech of the campaign: “America’s present need is not heroics, but healing; not nostrums, but normalcy; not revolution, but restoration; not agitation, but adjustment; not surgery, but serenity; not the dramatic, but the dispassionate; not experiment, but equipoise; not submergence in internationality, but sustainment in triumphant nationality.”

Despite the pandemic and civil unrest, after the First World War the ballot-box question was centered on the international arena. Cox campaigned on joining the nascent League of Nations, saying internationalism was necessary for peace; Harding, using the slogan “America First,” argued that the U.S. would compromise its sovereignty to do so.

Still, the American public was apparently exhausted by their last several years and paid little attention to policy. A reporter at the time, Brand Whitlock, put it this way (as quoted in a variety of historical texts): “The people, indeed, do not know what ideas Harding or Cox represents; neither do Harding or Cox. Great is democracy.”

The victor campaigned from his house—and selfie lines were a thing.

Even as Cox was touring the country holding campaign rallies and accusing Harding of being lazy and traitorous, Harding generally stayed home for a successful “Front Porch Campaign” that would earn him twice as many votes, an overwhelming victory. (And the U.S. never joined the League.)

At home, Harding would speak to Americans who showed up from all over the place in a sort of pilgrimage. At the end of his remarks, per History, voters would wait their turn to have their photograph taken with Harding and his wife, Florence. The photographs would then be sent to the sort-of Facebook of the time—the attendees’ local newspapers.

Meanwhile, speeches like the one in which Harding urged for normalcy instead of “nostrums” were distributed on records. One Repblican and one Democrat would have their words pressed onto a 12-inch disc every month. They cost US$2 (comparable to something like $26 in today’s dollars).

Radio was beginning to be A Thing, but wasn’t the typical modus operandi for campaigning until later on. The 1920 election results were the first to be broadcast on radio; Harding’s would be the first presidential voice heard on American airwaves.

Although there was not yet an influential Hollywood featuring stars ready to make political statements at awards shows, politicians were nonetheless conscious that pop-culture celebrities could lend them a hand in the polls.

Stumping for Harding was Al Jolson, a Lithuanian-American singer, comedian and actor dubbed, at the height of his career, as “The World’s Greatest Entertainer”—whose legacy has turned infamous for borrowing heavily from African-American music and performing in blackface.

A headline dug up by the New Yorker: “Harding Lets Up in Campaign Work—Declares Holiday and Motors Forty Miles for Game of Golf.”

Harding, at 55, became president at a time when the average lifespan for American males was only 56. Cox was a sprightly 50 years old.

Back in 1918, two years before he was elected, doctors warned then-Senator Harding that his “multiple amorous affairs might physically injure his delicate and enlarged heart,” according to a PBS report. He already suffered from a condition whose symptoms today align with congestive heart disease. (His wife’s refusal to have an autopsy conducted led to a much-discredited theory that she could have poisoned him.)

Although Harding’s health does not appear to have been at issue during the campaign, he didn’t live long enough to see through his first term in office. In 1923, he died in a San Francisco hotel room of what’s thought to likely have been a heart attack. VP Calvin Coolidge took over and was elected in his own right in 1924.