Sorry not sorry: Donald Trump vs. The New York Times

Daily Trump Tracker: The president gets into an apology argument with the Grey Lady and more from the Trump White House 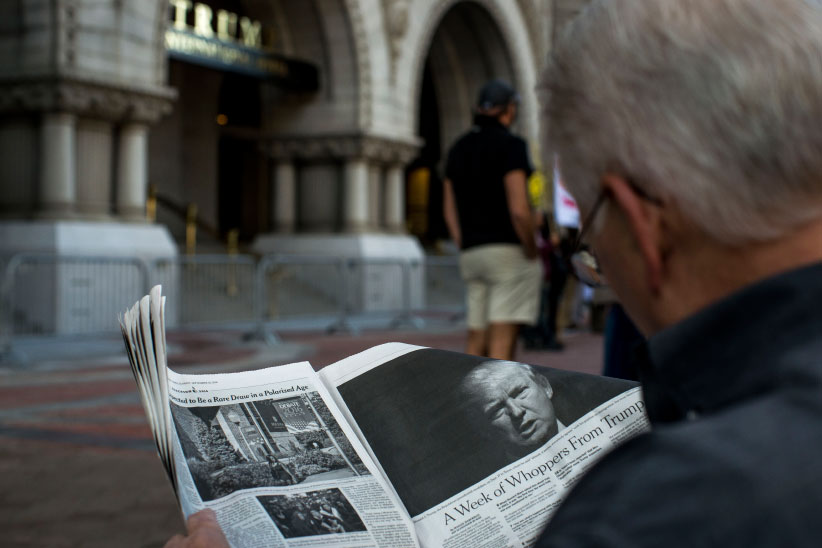 A man reads an article by The New York Times on Donald Trump during a protest outside the new Trump International Hotel at the old post office on October 26, 2016 in Washington, D.C. Republican presidential nominee Donald Trump will attend the hotel’s grand opening. (Gabriella Demczuk/Getty Images)

In what should probably be designated the American equivalent of the Canadian sorry-battle stereotype, the Donald and the New York Times got into an argument over who did or didn’t apologize to whom. On Twitter, the president repeated his claim that in the wake of the election the paper begged pardon of its subscribers for its coverage of him. Not so, shot back the Grey Lady’s communication team. (Falsehood arbiter Politifact ruled against Trump the first time around).

A new commission on opioid addiction

Chris Christie finally has a new job with Team Trump. He’ll lead a commission on opioid abuse and addiction, a crisis that New Jersey has taken a leading role nationally in addressing under his governorship. (The announcement came the same day that two of his former aides got prison sentences related to the Bridgegate scandal).

The president’s company, now ostensibly run by his sons, is reportedly seeking to erect a second awning in the capital, to go with its existing Trump International Hotel. The prospective property won’t bear the family name, however—the firm is supposedly looking for a boutique boarding house to paste their Scion brand on.

The price of a cabinet pick

When Tom Price swapped his House of Representatives bench for a Cabinet Room chair, he left behind a Georgia congressional district that’s been Republican red since 1979. But the new Health and Human Service Secretary’s former job—once also held by Newt Gingrich—could soon go to a Democrat. The special election to fill the Georgia Sixth seat is next month, and the president’s poor showing in the area in November leads one New York Times pundit to think 30-year-old Jon Ossoff has a real chance to flip the district.

Now where did I put the seating chart from last time?

Doing its best “guy in a political science seminar” impression, the Trump administration is reportedly proposing a plan for peace in the Middle East. Per the Jerusalem Post, they’re looking to bring leaders from Israel, the Palestinian Authority and Arab nations to a single U.S. stage for a public confab; the putative participants have yet to be convinced of what another round of negotiations will accomplish.