Maybe this time around, Mitt Romney will run as an anarchist 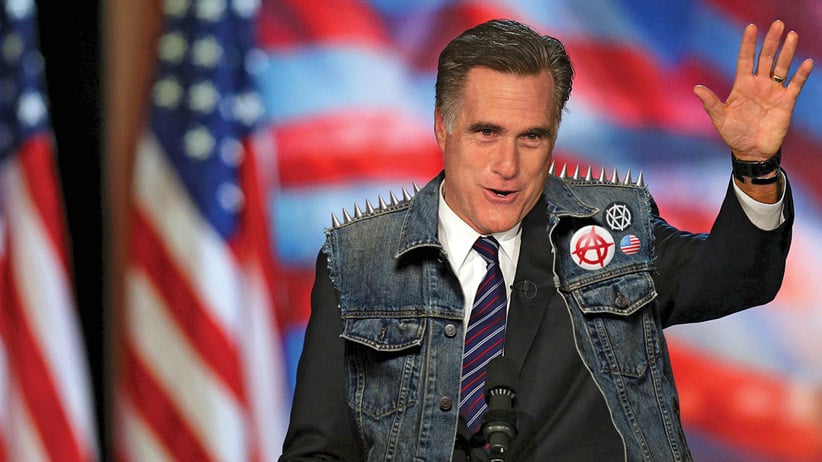 It’s coming down to the wire in the United States: only 660 days until the presidential election. Let the pre-jockeying for the months-long battle to determine the early favourite for the interminable race to decide who’s likely to win the actual campaign begin!

It’s true the state primaries are still a year away. But if you yearn to be president, now is the time to assemble your team, draft your platform and begin prepping for the arduous task of pretending to care about Iowa.

We are now well into the thrilling “consideration” part of the process. That’s the period during which potential candidates gauge their chances by personally contacting a diverse range of Americans—everyone from wealthy donors to the personal assistants of wealthier donors.

The U.S. media are fixated on the possibility of a third Bush competing against a second Clinton to become the first family. But Jeb Bush may be too moderate to win the nomination. The hard-core Republicans who vote in the primaries aren’t wild about “compassionate conservatism.” They prefer to hear about plans to slash taxes for the rich and hope for orphans.

Let’s look at some of Bush’s potential rivals:

Marco Rubio. You can tell the Florida senator is in because he just published a book with one of those generic “Please let me be president” titles like American Dreams. In fact, that’s the actual title: American Dreams. On the cover, a smiling Rubio stands with his sleeves rolled up and his hands on his hips against the backdrop of a blue sky with fluffy white clouds. He’s either running for president or getting psyched to sell you a time-share, America.

Mike Huckabee. The perennial long shot also has a new book with a cover that places him in front of fluffy white clouds. But his sleeves are down, which, in politics, is the sartorial equivalent of a concession speech. In fairness, Huckabee titled his book God, Guns, Grits and Gravy, so it’s possible he may instead be running for Male Vocalist of the Year at the Country Music Awards—or applying to be Ted Nugent’s chef.

Rick Perry. The Texas governor flamed out in the 2012 campaign after Republicans began to notice little things about him—for example, the fact that he is dumb. But Perry is back with a foolproof strategy to counter criticism of his intellect: He’s telling everyone that the president doesn’t need to be smart. “Running for the presidency is not an IQ test,” Perry said in an interview, presumably, while staring into the wrong camera. Perry’s participation is important because every Republican race needs a dumb guy among the nominees—first, because it’s entertaining; and second, because he usually wins.

Some have taken to referring to a 2016 Romney candidacy as Mitt 3.0. And let’s face it: A complete reboot was probably a good idea, given all the bugs in the 2.0 model’s Empathy Simulator.

Empathy will likely remain among Romney’s biggest challenges. In 2012, he was soundly beaten by President Barack Obama on the question: “Which candidate cares most about people like me?” On the other hand, Romney scored through the roof on: “Do you have any Grey Poupon?” Call it a draw.

In 2008, Romney ran as a hard-core conservative. In 2012, he portrayed himself as a moderate. Maybe this time around, he’ll be an anarchist, or a pacifist, or maybe a vegan monarchist of some kind. Lentils for all my subjects! It’ll be fun to find out.

Not that Romney’s policy “flexibility” sets him apart. Policy decisions usually come down to what the polls are saying and which campaign themes have been spoken for.

Several Republicans have already seized on the issue of income inequality. Others are staking claim to the economy or entitlement reform. Given the likely size of the field, those who join the race at the last minute may be forced to choose from the only remaining platforms: “The environment can suck it,” and “Let’s invade Grenada again!”