Clinton and Trump have claimed Georgia, Alabama, and Tennessee; Clinton has also taken Virginia and Arkansas, while Trump has carried Massachusetts 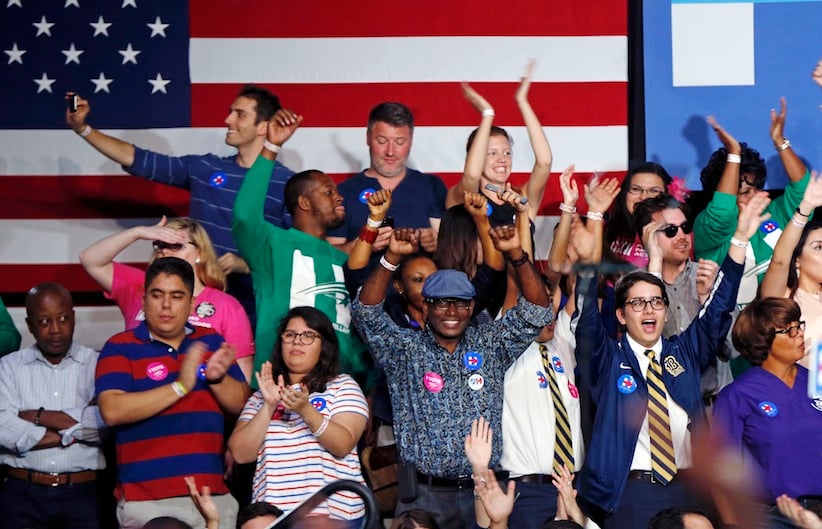 WASHINGTON — Republican Donald Trump and Democrat Hillary Clinton swept through the South on Super Tuesday — front-runners claiming victory in their parties’ primaries in delegate-rich Georgia, Tennessee, Alabama and Virginia. The two appeared ever more likely to end up in a general election showdown.

On the Republican side, Ted Cruz won his home state of Texas, as well as neighbouring Oklahoma. Democrat Bernie Sanders picked up a home-state win as well, in Vermont, and won in Oklahoma, too.

Still, the night belonged to Trump and Clinton, who turned the busiest day of the 2016 primaries into a showcase of their strength with a wide swath of American voters.

Signalling her confidence, Clinton set her sights on Trump as she addressed supporters during a victory rally.

“It’s clear tonight that the stakes in this election have never been higher and the rhetoric we’re hearing on the other side has never been lower,” she said.

Trump, too, had his eye on a general election match-up with the former secretary of state, casting her as part of a political establishment that has failed Americans.

“She’s been there for so long,” Trump said at his swanky Mar-a-Lago resort in Florida. “If she hasn’t straightened it out by now, she’s not going to straighten it out in the next four years.”

Trump’s dominance has rattled Republican leaders, who fear he’s unelectable against Clinton in November. But all efforts to stop him have failed, including an aggressive campaign by Florida Sen. Marco Rubio to discredit the billionaire businessman.

For Rubio, Super Tuesday turned into a bitter disappointment. While many Republican officeholders have rallied around him in recent days, his first victory remained elusive.

With an eye on Florida’s March 15 primary, Rubio vowed to keep up efforts to “unmask the true nature of the front-runner in this race.”

With results still coming in, Trump had won at least 139 Super Tuesday delegates, while Cruz picked up at least 52. Overall, Trump leads the Republican field with 221 delegates.

Sanders’ wins did little to help him make up ground in his delegate race with Clinton. She was assured of winning at least 334 of the 865 at stake on Super Tuesday. That’s compared to Sanders, who has at least 145 delegates.

Clinton also picked up wins in Alabama, Arkansas, and Texas while Trump carried the GOP contests in Alabama and Massachusetts.

Cruz desperately needed his win in Texas in order to stay in the race, and was likely to keep campaigning as the only Republican who has been able to defeat Trump in any primary contest.

Still, Trump’s wins in the South were a blow to Cruz, who once saw the region as his opportunity to stake a claim to the nomination. Instead, he’s watched Trump, a brash New York real estate mogul, display surprising strength with evangelical Christians and social conservatives.

Republicans spent months largely letting Trump go unchallenged, wrongly assuming that his populist appeal with voters would fizzle. Instead, he’s appeared to only grow stronger, winning states and drawing broad support for some of his most controversial proposals.

In six of the states on Tuesday, large majorities of Republican voters said they supported a proposal to temporarily ban all non-citizen Muslims from entering the United States, an idea championed by Trump. Two-thirds of GOP voters in Texas, Virginia and Georgia, 7 in 10 in Tennessee, and nearly 8 in 10 in Alabama supported the proposal, according to the early exit polls.

Related: Trump is for real. And the U.S. establishment can only blame itself.

Worries among Republicans appeared to grow after Trump briefly refused to disavow former Ku Klux Klan leader David Duke during a television interview. Trump later said he had not understood the interviewer who first raised the question about Duke, and he did repudiate him.

In the Democratic race, Clinton has steadied herself after an unexpectedly strong early challenge from Sanders. The Vermont senator did carry his home state decisively, and told the crowd at a raucous victory party that he was “so proud to bring Vermont values all across this country.”

Sanders, who has energized supporters with his calls for a “political revolution,” has struggled to expand his base beyond young people and liberals. His weakness with black voters, a core part of the Democratic constituency, has been particularly acute and was underscored again on Super Tuesday.

Clinton led with African-Americans, as well as both men and women, in Georgia and Virginia, according to surveys conducted by Edison Research for The Associated Press and television networks. Sanders continued to show strength with young voters, carrying the majority of those under the age of 30.