Support for 'my girl' Clinton is personal, Michelle Obama says

'I believe with all of my heart that Hillary Clinton will be that president,' first lady says 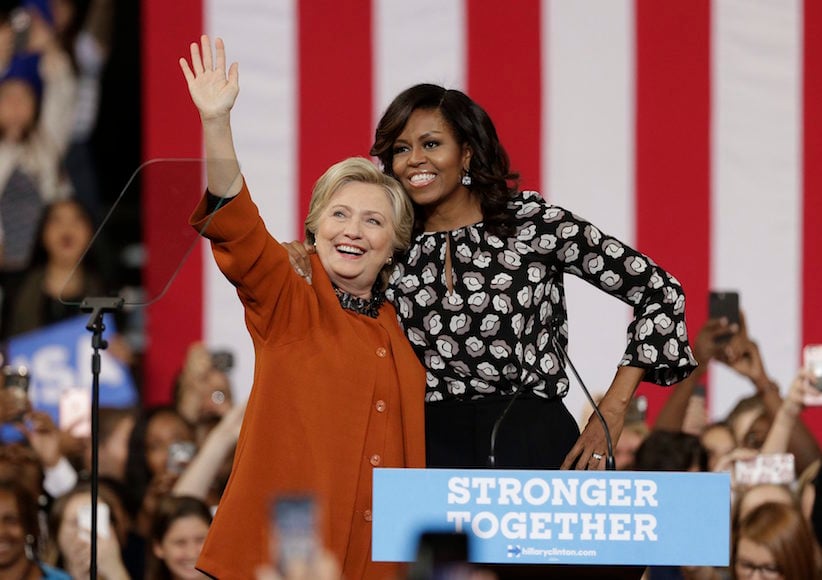 WINSTON-SALEM, N.C. — As first ladies they could hardly have been more different. But as Democrats looking to fire up female voters, Michelle Obama and Hillary Clinton were firmly bonded on Thursday.

In their first joint appearance on the campaign trail, Mrs. Obama and Clinton talked up their shared respect, common values and singular goal: Defeating Republican Donald Trump. They papered over a somewhat rocky history and their vastly different paths through public life.

With Mrs. Obama aiming to secure her husband’s legacy and Clinton needing to propel women to the polls, the two women sought to celebrate their political marriage of mutual interest, and reassure voters it’s real.

“Seriously, is there anyone more inspiring than Michelle Obama?” Clinton asked, as a crowd in Winston-Salem, North Carolina, answered with cheers. Mrs. Obama declared the feeling mutual. She referred to Clinton as “my girl” and offered reassurance that her testimony for Clinton is both personal and political.

“Yes, Hillary Clinton is my friend,” she answered.

In the East Wing, Clinton dived into policy, undertook a massive project and failed under a harsh spotlight. Mrs. Obama largely steered clear and enjoyed quieter, modest success. Both Ivy League-trained lawyers with their own careers, Clinton bridled under the stereotypes associated with the office, while Mrs. Obama declared herself “mom-in-chief.” While Clinton held onto her maiden name, her Democratic successor let it be known she preferred the “Mrs.” title.

And when her time in the White House was ending, Clinton began plotting her return to Washington. Mrs. Obama hasn’t hidden her readiness to leave. The White House has quickly and repeatedly shot down any talk of the first lady continuing in politics.

Acknowledging her reluctance in the political spotlight, she said, “I would not be here” if she didn’t believe so strongly Clinton would be a president she would trust.

“I believe with all of my heart that Hillary Clinton will be that president,” she said. 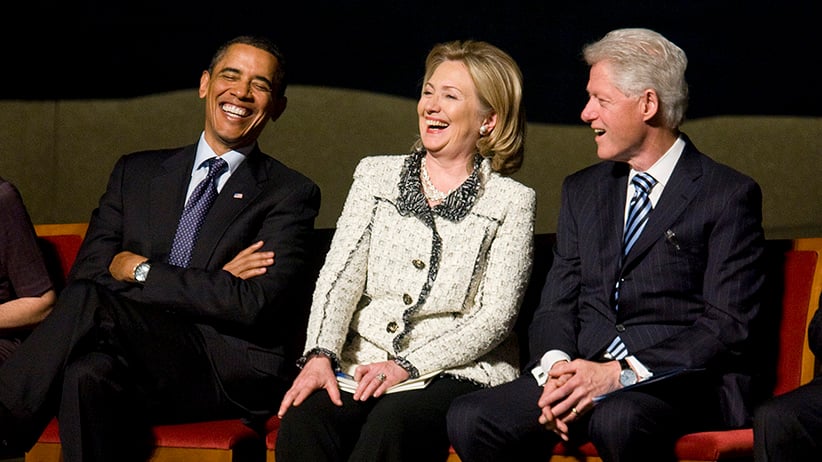 Clinton’s day in North Carolina turned into a college tour, as she tried to push young voters to the polls.

After the rally, Clinton drove to Greensboro, where she greeted students at an early voting site at University of North Carolina-Greensboro. She then dropped in on a homecoming pep rally at the historically black North Carolina Agricultural and Technical State University nearby.

The former secretary of state was greeted by a DJ blasting hip-hop, a dance troupe, a marching band and deafening cheers at the surprise stop. “The Aggies are in the house!” she cheered back.

“I hope you will all vote in this election because it’s so much about you!” she said.

Mrs. Obama’s appearances have become a key part of Clinton’s effort to fire up women — particularly black women, for whom she’s a model and a source of pride. And Democrats have relished Mrs. Obama’s speeches as high points of the campaign cycle. Her passionate response to Trump’s vulgar comments about women brought an emotional resonance that Clinton, who rarely gets personal on the stump, doesn’t often deliver.

Both Clinton and Mrs. Obama on Thursday revived a line from the latter’s speech at the Democratic National Convention — “When they go low, we go high” — turning it into a call and response.

The Winston-Salem event drew some 11,000 people, according to the fire marshal, one of largest crowds of Clinton’s campaign. Trump repeatedly boasts that his crowds are generally larger than hers.

The audience roared as the two women walked onstage, turned to each other and embraced, the first lady towering over the shorter candidate.

The new partnership has made for a striking odd couple on substance, too.

As first lady, Mrs. Obama has largely dodged controversial issues. She’s stayed focused on her projects involving healthful eating, exercise, support for military families and education for girls — avoiding public opinions on thornier subjects. She’s mastered the art of advocacy through popular culture, while in recent years all but ignoring the possibility of policymaking through legislation. She’s cultivated a brand built on style, glamour and fashion.

It’s a tenure that bears little resemblance to her Democratic predecessor in the East Wing. Clinton came in promising, along with her husband, a new kind of partnership in the White House. Hillary Clinton was a veteran of the feminist movement and ready to expand the office of first lady to suit her experience and passion for policy. She had an office in the West Wing, took over the health care overhaul effort and ultimately became a target of investigations and criticism alongside her husband.

That’s something Mrs. Obama and her aides sought to avoid. Asked to cite role models, Obama has named Eleanor Roosevelt and Jacqueline Kennedy.

The Clintons and Obamas themselves have a fraught history, one that includes both spouses. While Barack Obama and Hillary Clinton battled in 2008, Michelle Obama raised questions about her husband’s opponent, framing the choice between the two as “about character.”

Since then the women have publicly buried the hatchet.

The differences between Clinton’s and Mrs. Obama’s tenures speak in some ways to the differences in their generations _ Clinton representing the first wave of baby boomers eager to push boundaries, while Obama benefited from lessons learned, noted Carl Sferrazza Anthony, a historian at the National First Ladies Library.

“Beneath the surface they both brought a sense of rigour and structure and focus,” he said. “They were very
objective-oriented.”

Those objectives were clearly different, he said.