That moment when Ted Cruz was booed

CLEVELAND — Texas Sen. Ted Cruz tried to link arms with Republicans at the party’s national convention on Wednesday, but was booed lustily by delegates when he ended his speech without offering Donald Trump his endorsement — or even saying he would vote for the New York billionaire.

As he appeared on stage, Cruz basked in a minute-long standing ovation. Cruz finished second to Trump in the crowded Republican primary campaign and congratulated the GOP nominee on his victory.

But as close as Cruz came to saying he wanted Trump to win the White House came when he said, “I want to see the principles that our party believes in prevail in November.”

Cruz didn’t tell the convention crowd that he plans to vote for Trump. Nor did he ask his supporters, hundreds of whom encouraged him to run for president in four years at an event on Wednesday afternoon, to vote for the newly minted Republican nominee.

Interrupted by chants of “Trump, Trump, Trump,” Cruz paused and said with a smile, “I appreciate the enthusiasm of the New York delegation.”

But as Cruz closed his remarks, and as the crowd of more than 2,000 delegates at the Quicken Loans Arena waited for Cruz to say something — anything — kind about Trump, he demurred.

“And to those listening, please, don’t stay home in November,” Cruz said. “Stand and speak, and vote your conscience. Vote for candidates up and down the ticket who you trust to defend our freedom and to be faithful to the Constitution.”

The delegates responded with angry boos, and Cruz backer and former Virginia Attorney General Ken Cuccinelli escorted Heidi Cruz off the convention floor as she was heckled by Trump delegates. 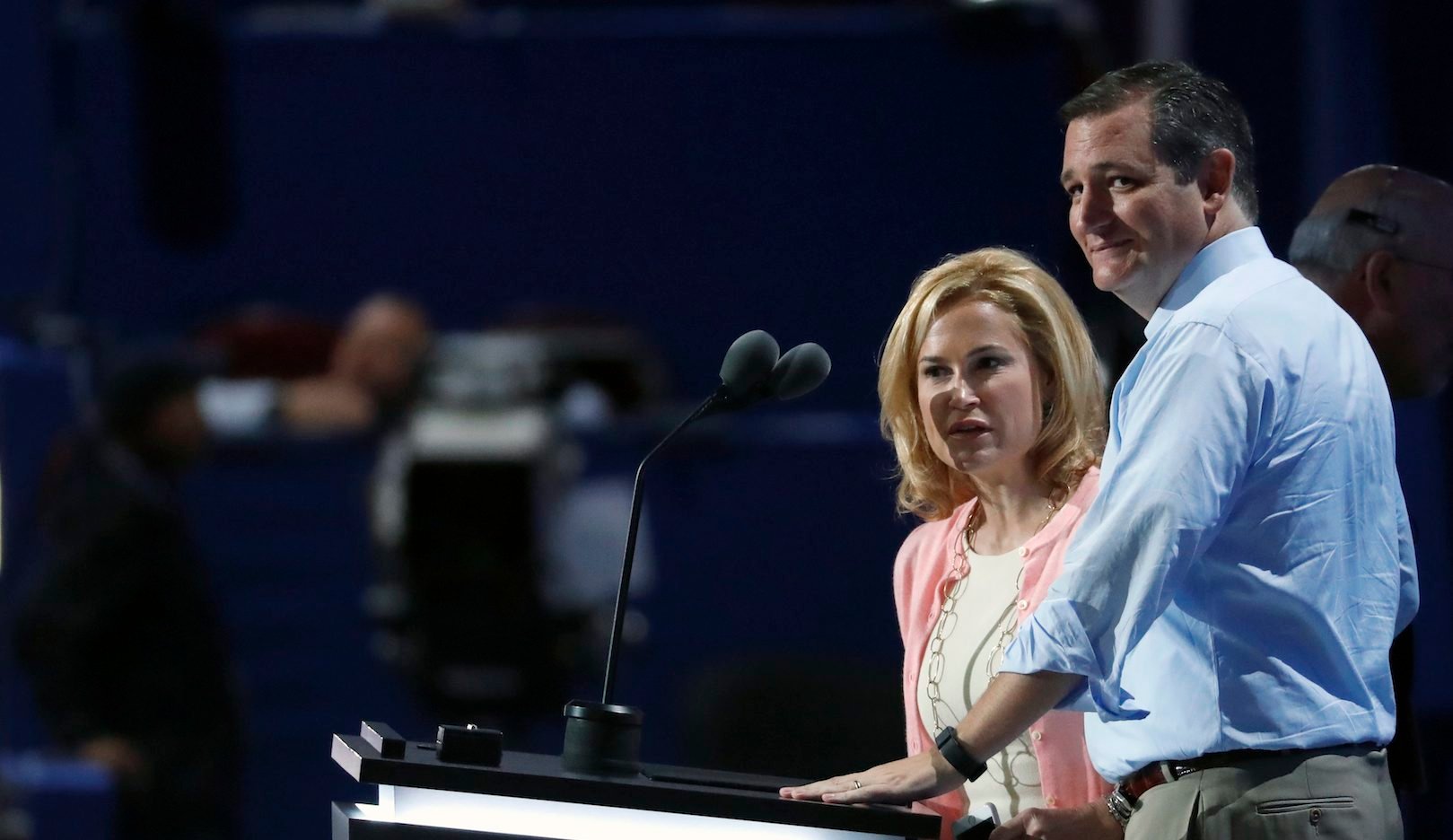 Cruz and his wife, Heidi, during a sound check before the third day of the Republican National Convention in Cleveland. (AP Photo/Paul Sancya)

“He’s a chicken,” said Eugene Delgaudio, a delegate from Sterling, Virginia, who clucked like a chicken when asked about Cruz’s decision. “He needed to toughen up like every other Republican loser of any nomination battle in the last 100 years since Abraham Lincoln and just suck it up, be a man and back the nominee that he was beaten by, fair and square.”

The crowd’s boos quickly switched to cheers when Trump entered the arena at that moment. His daughter Ivanka and other members of the Trump party turned their backs on Cruz to stand and applaud Trump, who sat down in the front row of his VIP box to watch his son Eric deliver the next speech.

New Jersey Gov. Chris Christie called Cruz’s decision “totally selfish.” The outspoken Trump backer, like Cruz bested by the real estate mogul in the GOP primaries, said the voters made clear that Trump is their choice.

“If we’re not going to do that, why do we have elections? Because Ted Cruz has decided that he knows better? Than all of the people who voted in the elections?” he said.

The booing was so intense the Trump campaign encouraged its many staffers on the convention floor to try to calm the delegates down, said a Trump aide speaking on the condition of anonymity to discuss internal campaign discussions.

Cruz halted his campaign two months ago, having outlasted all but Trump in a field that once numbered 17 candidates. He finished a distant second in the delegate accumulation during the Republican nominating campaign.

The reaction to Cruz’s refusal to endorse Trump, who branded the Texas senator “Lyin’ Ted” during the GOP primaries, stood in stark contrast to his reception earlier Wednesday among a crowd of the convention’s most conservative delegates.

Many of Cruz’s supporters from around the country came to thank him, shake his hand and pose for photographs. They crowded around him 10 people deep in the sun on an outdoor restaurant deck after his 20-minute speech, chanting “2020, 2020, 2020!”

Donna Metz, Cruz’s 2016 Kansas state co-chairwoman, wore a sparkling red, white and blue hat and was jostled in the crowd as she made her way toward Cruz. “Oh, my gosh, I hope he runs again,” said Metz, of Eudora, Kansas. “He’s by far the best candidate.”

As he would during his convention speech, the freshman lawmaker with a Texas-sized political ambition steered clear of a recommendation to back Trump at the afternoon event. Instead, Cruz talked about conservative ideals that could form the backbone of a future campaign.

“There is a better vision for our future: A return to freedom,” he said.

Cruz is eager to be seen as the face of the modern conservative movement should there be an open GOP field in four years, and he said Wednesday afternoon he was unsure what the future would bring.

But he urged the group to “follow our conscience,” ”unite behind liberty“ and ”empower the grassroots,“ all signals to the deep organization Cruz assembled in finishing second to Trump to be ready to jump back into action in four years.

And for all the boos Cruz got later from the Trump backers inside the convention hall, supporters of the Texas senator said his refusal to back the billionaire was “true leadership.”

“I support it 100 per cent,” said Dalton Glasscock, a Cruz delegate from Wichita. “If someone feels they can vote for Trump, great. If they can’t, vote for someone they can believe in. He left the door open to more.”