The beginning of the end of America's foregone conclusion

The impeachment trial of Donald Trump is on course to hit a wall of GOP partisanship—as predicted. But the flickering candle of U.S. democracy is not yet out. 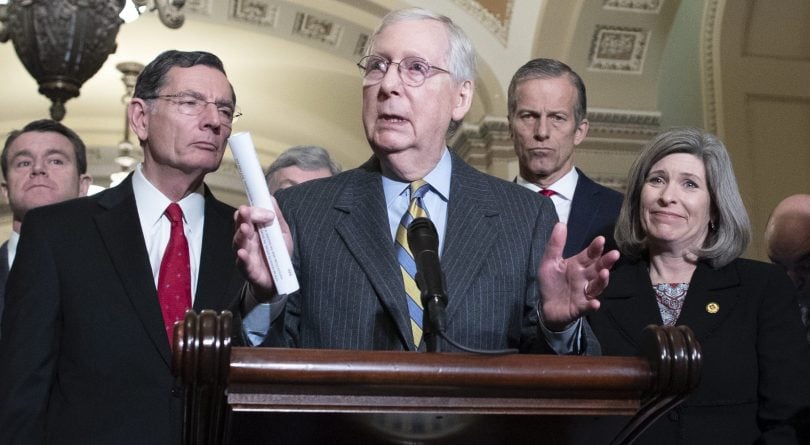 Traipsing toward Trumpxit—or a hingeless president’s triumphant liberation to keep doing whatever he feels like doing for another 12 or 60 months—the United States Senate finally got down to the business on Tuesday of trying Donald J. Trump for a brace of so-called high crimes and misdemeanours, straitjacketing the world’s most self-important parliament into hour after hour after hour after hour after hour of shutting up and sitting down and sipping nothing stronger than water or milk

It will be like this for the next two or three weeks, in all probability—the duly deputized accusers and defenders of both parties hurling jurisprudential thunderbolts at each other, while 100 jurors aged 86 and under squirm and fidget and scribble and yawn and pick and scratch and speak not a word “under pain of imprisonment,” as the sergeant-at-arms phrases his medieval admonition.

“Hear ye! Hear ye!” this beefeater intones at the start of each session, but Democratic and Republican members of Congress stopped hearing each other a long time ago.

Although the president’s acquittal is a virtual certainty, barring a Bounty-ous (and probably electorally suicidal) mutiny in the Republican ranks, some of the drone sessions may extend from midday until one or two or three o’clock in the morning—“a national disgrace, rushed in the dark of night,” Chuck Schumer, Democrat of New York, predictably seethed to reporters on Tuesday.

“Completely partisan,” the minority leader accurately described the impending marathon. (Gilbert and Sullivan beat Schumer to this tack by a 130 years in HMS Pinafore: “I always voted at my party’s call, and I never thought of thinking for myself at all,” they gibed of a loyal MP. Nothing has changed.)

Indeed, late Tuesday afternoon, when Sen. Schumer forced the first of numerous votes on issuing subpoenas for White House documents and testimony from close Trumpian allies, the measure failed along precise party lines. Tuesday’s only surprise—and it was a minor one—was the concession by Republican leader Mitch McConnell to extend the trial by a day or two by spreading out each side’s argumentations. Not even the rules of the trial have been agreed upon; that could take the rest of the week.

“Why are we here?” boomed Jay Sekulow, one of the president’s foxiest television lawyers, early in the day. “We are here because of a phone call.”

“It’s too much to listen to,” whined Pat Cippolone, another member of Trump’s legal backfield. “The hypocrisy of it all.”

“The president may not like being impeached,” Rep. Zoe Lofgren, Democrat of California entered into the record. Tough noogies, she went on.

RELATED: A Trump-empowering act of impeachment

Also from the Democratic side came Rep. Adam Schiff, asking, like a bar-mitzvah boy at Passover, “Why is this trial different from all other trials?”

Because, he answered himself, the charges against Donald Trump “are the most serious ever brought against a president.” Schiff wagered that the president has engaged in “the trifecta of constitutional misconduct … full, complete, and absolute obstruction” in plain sight of “a public already jaded by past experience.”

In 1868, among the 11 writs of misdemeanour that were brought against President Andrew Johnson, Article X alleged that he “did make and deliver with a loud voice certain intemperate, inflammatory and scandalous harangues, and did therein utter loud threats and bitter menaces as well against Congress as the laws of the United States duly enacted thereby, amid the cries jeers and laughter of the multitudes then assembled and in hearing.”

On Tuesday, Sen. Dick Durbin, Democrat of Illinois, verbally indicted Donald Trump with issuing “an endless blizzard of mindless tweets,” but spewing invective like a barn-bred boor is not among the formal complaints against him. The president, meantime, was in Davos, Switzerland, thumbing his nose again at young Greta Thunberg and admonishing his fellow billionaires and trillionaires that “to embrace the possibilities of tomorrow, we must reject the perennial prophets of doom and their predictions of the apocalypse. They are the heirs of yesterday’s foolish fortune tellers.”

Back in Washington, 11 current and former presidential hopefuls were in the benches on Tuesday when the chief justice of the U.S. Supreme Court hammered the chamber into session—a percentage of the body that was two points higher than the tranche of Americans who trust Congress to be an honest and effective institution in one recent poll

“It’s the kind of thing our State Department would criticize in other countries,” lawyer Cippolone sniffed at what he charged were the Democrats’ insidious closed-door interviews with the diplomats, appointees and hangers-on who are at the core of their case against Trump. But, after three years and one day of Donald Trump’s presidency, few Americans found themselves in a position to tar the institutions of other lands.

“Which team are you on?” a Maclean’s reporter in the Capitol asked one young man as he left the Senate chamber.

“There is a third team that says that all government is invalid,” he replied. “You can be one of us crazy libertarians.”

Yet even in these fractious hours, the candle of American democracy had not finally flickered out. In the Capitol hallway late Tuesday was a vibrant young woman named Tiffany Ownbey, a real-estate agent and neophyte politician who had just been elected as the first female mayor of Belton, S.C., population 4,134.

“We were going backward,” Mayor Ownbey, 34, was saying as she walked toward the Senate, hoping to score a ticket for the trial of a president. “We weren’t growing. We weren’t thriving. We lost all of our small manufacturing. We lost jobs.”

“They’re already asking me about being governor or senator some day,” Ownbey said.  “But I just want to be a good mayor for Belton. I feel like there’s still lots of good people out there.

“Do you know what they call me? They call me a breath of fresh air.”