The brick-wall Senate that Biden faces if he wins 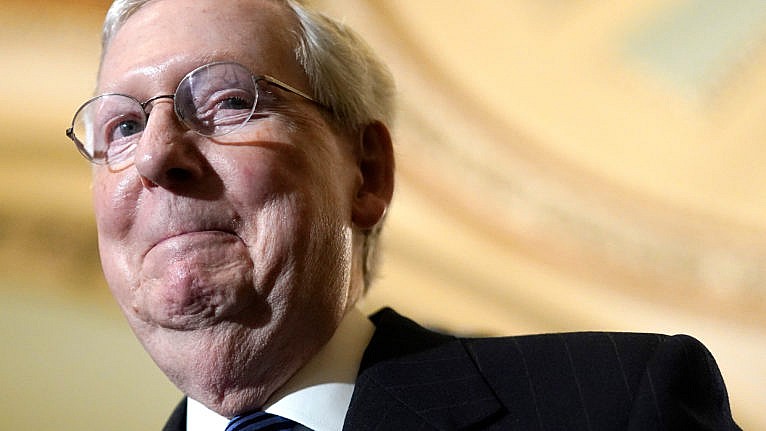 Senate Majority Leader Mitch McConnell (R-KY) has much to smile about, after his party held off the Dems in the 2020 congressional elections. (Win McNamee/Getty Images)

If counting trends continue and Joe Biden ekes out a victory in the presidential race, he’ll almost certainly face a legislative system that’s about as divided as the United States currently is. The Democrats retained control over the House of Representatives but, barring additional shockers, Republicans will hang on to the Senate.

If a prospective President Biden is to get legislation passed, almost everything will have to go through Senate Majority Leader Mitch McConnell, the wily, oft-smirking Kentucky politician who proved a masterful thwarter of Barack Obama’s agenda and ready enabler of much of Trump’s. Biden may not face total gridlock, but liberal hopes for major progress on climate action, health care and more will be dashed for at least another two years, when the next one-third batch of Senate seats go up for election.

Turning the Senate blue was always going to be trickier than toppling Trump. The Democrats entered the election with 47 senators (including two allied independents, including Bernie Sanders) to the Republicans’ 53. So getting to even a 50-50 tie that the vice-president—Kamala Harris in the event of a Biden victory—would break would have required three flips. Make that four, as Senator Doug Jones, a Democrat who’d held a seat for Alabama, predictably lost by a lot. (The Democrat in Michigan hung on as Biden’s vote surged on the second day of counting, though Sen. Gary Peters’s margin was tighter.)

RELATED: This election brings 4 important changes to America and the world

Senate candidates rode strong Biden showings to overtake Republicans in Colorado and Arizona, but that’s where the good news ended for the Democrats: with a net gain of one seat. Trump’s electoral resilience helped retain competitive seats in Iowa, Montana and those blue-wave dream pickups like Texas, Alaska and Kansas never came to pass. North Carolina’s Thom Tillis, a Republican, seems likely to win over a rival plagued by a sex scandal. Which means—and this is a rarely heard phrase in the U.S. political conversation—it all comes down the Georgia. No candidates got clear majorities in either of the state’s two Senate races, so they’ll go to runoffs in January. Turn both of them blue, and the Senate balance is at 50-50. But Democrats underperformed Biden in both races and in a special vote, likely with a lower-turnout, voters might want the upper house to be a conservative check on Biden.

This means a President Biden will probably have to live with a 52-48 or 51-49 Republican edge. Divided government, it’s called in the United States—and it’s been the norm for most of the past 40 years. The only times the White House, Senate and Congress were all with the same party since 1980 was a four-year stint in the middle of George W. Bush’s presidency, and the first couple years in the White House for Trump and for Democrats Obama and Bill Clinton.

We saw how little Trump achieved in the last two years, with the Democrats and their Speaker, Nancy Pelosi, running the House. In these highly partisan times, McConnell may play obstructionist, as he did in blocking Obama’s bid to fill several judicial vacancies. But Biden has a history with him, going back to their two decades together as senators. And as Obama’s vice-president, he did much of the diplomatic work with the Kentuckian.

RELATED: Welcome to the new America

But that entails compromises that will sit poorly with progressive Democrats who tout the Green New Deal, and contentious projects like adding seats to the Supreme Court or giving statehood to Washington, D.C. and Puerto Rico. Biden, if he wins, won’t get to be the Bernie Sanders-directed radical Trump depicted him as. He might even struggle to secure a considerable stimulus package for a country economically diminished and suffering amid the coronavirus pandemic.

The Senate wouldn’t be the only conservative chamber blocking the policy goals of Pelosi and a victorious Biden. The Supreme Court now has a 6-3 conservative edge thanks to McConnell’s rushing through of the Amy Coney Barrett nomination.

On the Senate floor before confirming the anti-abortion replacement for Ruth Bader Ginsburg, McConnell seemed to concede that his party was about to lose control of the White House, and quite possibly his own chamber.

“A lot of what we’ve done over the last four years will be undone sooner or later by the next election,” the majority leader said. But, he added in reference to the country’s top court, now stacked with likeminded justices: “They won’t be able to do much about this for a long time to come.”