The Democrats in Miami, or half of them anyway

Paul Wells: The field seeking to take on Donald Trump is overcrowded. The first debate on Wednesday made clear that's not such a bad thing. 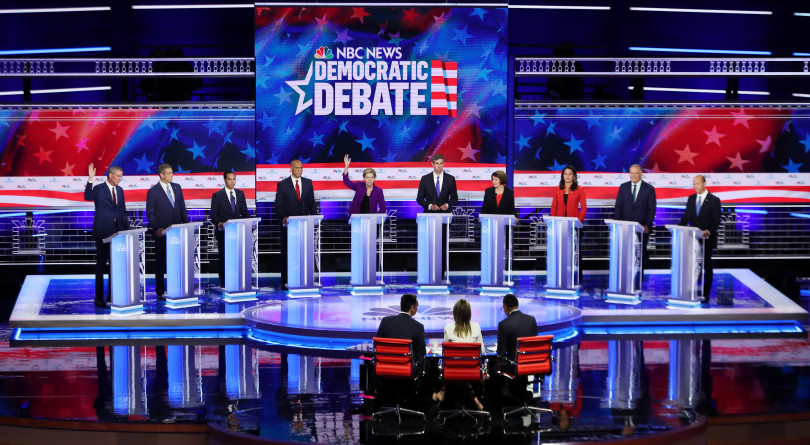 What a mob scene. I’ve never seen such a seething mass of ambition and exquisite demographic balance sprawled across the stage of a political debate before. And that was just the moderators.

“For Savannah, José, Chuck and Rachel, I’m Lester Holt,” the NBC Nightly News anchor said in reference to the total of five quizmasters of Wednesday night’s NBC-MSNBC-Telemundo debate in Miami. The panelists had been deployed in waves, three in the first hour, Rachel Maddow and Chuck Todd in the second, and while they were there to assuage the corporate egos of a raft of co-presenting news organizations, even this impressive team was outnumbered by all the Democrats onstage: 10 candidates, ranging from Elizabeth Warren all the way down to Future Also-Rans I through VII.

And that’s only the first half. The rest of the Democratic field — Joe Biden, Bernie Sanders, Kamala Harris, Mayor Pete and more — will do it again on Thursday. There’s a general sense that the Dem field is overcrowded, even given all the time still available to edit it before primary season begins in early 2020. There’s some anxiety about this state of affairs. Surely a challenger to Donald Trump must be appointed soon so she or he can take a good long run at the guy. (Personally I see no reason to rush and a lot of reason for the party to take its sweet time, but that’s very much the minority opinion.) A lot of Democrats had hoped this pair of debates would help separate the serious candidates from the also-rans.

The shakeout may have to wait. God help me, I liked almost all of these candidates. By and large they seemed well-spoken, reasonable and engaged advocates. Taken as a group, they avoided a big strategic mistake I’d been dreading, which would have been to compete theatrically in their outrage at Donald Trump. Instead they mostly—mostly—treated the president as a tacit given, and spoke instead about the issues that will face any president after Trump is gone. If he ever is.

By the end of the two hours, I had a higher opinion of New Jersey Sen. Cory Booker and Barack Obama’s second-term housing secretary, Julián Castro; lower opinions of Tulsi Gabbard and Beto O’Rourke; and a clear understanding of why Massachussetts Sen. Elizabeth Warren, as unrelenting as a steamroller, has been gaining support steadily.

O’Rourke, who had a good run as a Senate candidate against Ted Cruz and whose appearance on the cover of Vanity Fair may yet turn out to be the worst call the magazine has made since Gretchen Mol, was clearly a victim of believing his own press. Lean and softspoken like Henry Fonda as Tom Joad, he tried to pivot away from the specifics of every question into a homily about the wounded heart of the shattered American dream, which probably sounded poetic to him but sounded to me like not answering the damned questions. To the moderators too. O’Rourke should have taken the hint when one of his interrogators—José? Lester?—gave him an extra 10 seconds to answer the first question, on upper-income tax brackets, after he had wasted his time answering it with a bad imitation of Walt Whitman (“We need a new democracy”). Note to future debaters: “Would you like another chance to answer the question?” is usually a bad sign.

Like many distracted observers in a country that is not, after all, going to elect the next U.S. president, I admit I don’t know everything about all of these candidates. Or nearly anything about most of them. I can now say with assurance that Tulsi Gabbard has served in the U.S. military. This is because she answers every question with a reference to her service. That service included a stint in a combat zone in Iraq and continues today in the Hawaii Air National Guard. It honours her. But her constant references to it had an if-all-you-have-is-a-hammer air about them.

At one point Tim Ryan, an Ohio representative running as a flyover-country swing-state moderate, called for continued military engagement in Afghanistan. Gabbard replied that “as a soldier,” his answer was unacceptable. Sorry, but the doctrine of civilian command of the military is an important principle, and I need a better reason than Gabbard’s for drawing down U.S. forces faster and further than Barack Obama did.

Castro and Booker stood out because they made every question sound like the one they’d been waiting for all night. Castro, whose candidacy was news to me (see distracted observer, above), controlled much of the evening’s conversation. He was more skilled than most of the competition at slipping in bits of autobiography along with his substantive answers. On pay gaps: “I know what it’s like to struggle. I know what it’s like to rent a home and worry about whether you’ll have enough to make the rent at the end of the month.”

He flirted with overreach when, speaking about the migrant caravans from Central and South America and Trump’s brutal response to them, he called for “a Marshall Plan for Honduras and Guatemala and El Salvador.” It’s the sort of plan that either means what it says or it means nothing. Taken at face value, Castro was calling for something comparable to the $100 billion the Marshall Plan would have cost in today’s dollars, aimed at countries whose challenges may be a lot more intractable than Western Europe’s were in 1948, and whose populations might well view such interventions as imperialism more than as real help. My hunch is that it was mostly something that sounded good in Miami for a Telemundo audience.

You never know, before debates and rallies and the mechanics of a campaign begins, whether a candidate can fill the room. Tom Long and Brian Topp were impressive candidates at the federal level in Canada over the past several years who, when they finally ran for public office, simply couldn’t fill a stage or a room with the force of their personality.

When someone does fill a room, it’s just as impressive. On paper I wish Elizabeth Warren wasn’t almost as old as Trump and Biden and Sanders, and I suspect the detailed policy she’s been rolling out will provide lots of targets later in the campaign. But in the flesh she’s poised, at ease, and she projects a don’t-mess-with-me attitude that left her opponents plainly wary about messing with her. And all that policy, in the meantime, left her with an economic and quality-of-life message that gives her plenty to talk about when social programs, job quality and other bread-and-butter issues are raised.

The luck of the draw made Wednesday’s debate the undercard, with more of the presumed star candidates scheduled for Thursday’s confrontation. But it’s way too early to guess who’ll be the real stars. In the meantime, taking a couple of hours to air out some differences is a feature, not a bug. The Democrats should chill. They have good candidates, mostly.