The Democrats put the i-word—impeachment—back on the table 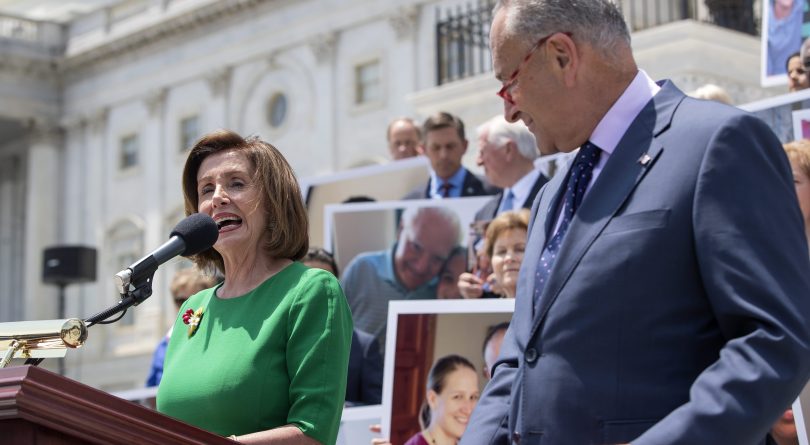 America’s Congressional kindergarteners returned from six weeks in summer camp Monday to face the same riddle that had them gnawing on their Crayolas before the bell rang for recess—how to toilet-train President Donald Trump into supporting their policy agenda, especially on gun-control legislation, while conniving to have him thrown out of office at the exact same time.

At stake, as a Maclean’s reporter heard Democratic Party leaders tell it on both the Senate and House of Representatives wings of the Capitol, were the hundreds of thousands of human lives that they claim Trump could preserve annually if only he would sign on to a House-passed bill mandating tighter background checks on Kalashnikov purchasers at gun shows and online. But the back-to-school chorus was drowned out by Monday’s filing by the House Judiciary Committee of a formal “Resolution for Investigative Procedures,” the first official step in clamping The Donald in faux-gold-plated irons.

(Even that cataclysmic step was obscured by former Alaskan First Gentleman Todd Palin’s filing for divorce from his wife Sarah, citing the same “incompatibility of temperament” that Democrats feel about President Donald Trump.

By week’s end, the wheels of the first presidential impeachment since Bill Clinton’s may be set irreversibly in motion. No U.S. president ever has been convicted and thrown out of office—let alone sent to San Quentin or Alcatraz. Four, however, have been removed by gunshot.

In the wake of last month’s massacres at a nightspot in Ohio and a Walmart in Texas—and the unceasing toll of one hundred gun murders, suicides and accidents that occur in this country every day—the current president had vowed to support “the strongest bill ever.” Since then, in the words of Senate Minority Leader Chuck Schumer, Democrat of New York, “he’s been all over the map.”

(If we could pass a bill to stop people from breaking  the law, we would do it,” Sen. John Cornyn, Republican of Texas, said on the Senate floor.)

Never an A student in cartography to begin with, Trump flew off Monday afternoon to a campaign rally on the North Carolina-Alabama border, where a Congressional seat that has been in Republican hands since the John F. Kennedy administration is in grave danger of being lost to the gun-grabbing liberals in a special do-over election on Tuesday.

Before departing the White House, the president presented medals and citations of courage to 11 police officers and civilians from Dayton and El Paso who had, in his words, confronted “the worst violence and most barbaric hatred with the best of American courage, character, and strength.”

“The light from these intrepid souls defied the darkness and confronted the most sinister danger,” Trump said, describing “horror beyond belief” perpetrated by a “soulless and bigoted monster”—“a racist attack motivated by pure evil hatred.”

“Our nation is shocked and enraged by these inhuman and sadistic acts of bloodshed,” said Donald Trump. “We fail to comprehend how any person could be so warped by malice and contempt,” he went on, while failing to comprehend how many citizens—93 per cent, according to one survey this week—demand that he do something, anything, to stanch the flourishing blood.

Back at the Capitol, meanwhile, Senator Dennie Stabenow, Democrat of Michigan, was lamenting the fact that the United States has become so warped itself that her grandson’s elementary school has been spending precious instructional funds installing bulletproof doors. Chuck Schumer was placing gun control “at the acme” of the Senate’s agenda, Republican leader Mitch McConnell was promising not to waste “serial votes” on fairy-tale bills that the president will not sign into law, and The Donald was whirlybirding off to Dixie and vowing that “at some point prior to the election, I’m going to be giving out a financial report on me.”

“And it will be extremely complete,” predicted Scrooge McDuck, measuring his worth in dollar signs and not in the diminution of pure evil hatred. “I’m going to give out my financial condition. And you’ll be extremely shocked that the numbers are many, many times what you think. I don’t need to have somebody take a room overnight at a hotel.”

The president’s braggadocio made some Democrats’ heads explode.

“He has just decided that he is above the law and he can do whatever he chooses,” growled Rep. Marcia Fudge, Democrat of Ohio, to a Maclean’s correspondent in Statuary Hall. “Whether he’s convicted or not, they need to know it.”

“If he’s acquitted, doesn’t that negate the whole purpose of impeaching him in the first place?” Rep. Fudge was asked.

“Do you think most people don’t know that already?” Rep. Fudge was pressed.

“They don’t know it,” she maintained. “The vast majority of Americans have no idea what he has done. Listen—I held a town hall and I listed the ten top reasons why he should be impeached. They had no idea.

But Rep. Raja Krishnamoorthi, Democrat of Illinois, took the opposite tack.

“I don’t think that you should actually begin an impeachment until you have the evidence to actually sustain a conviction in the Senate,” Rep. Krishnamoorthi said in an interview. “The worst-case scenario would be for the president to be impeached and then to claim total exoneration.”

“Total exoneration” struck a listener as oddly familiar, as if he had heard those words somewhere before.

“Would acquittal embolden the president, or do you think it would chasten him?”

“It would be emboldening him to do further wrongdoing and probably helping him politically as well,” Rep. Krishnamoorthi shrugged.

“Wouldn’t acquittal in the Senate just embolden him?” Rep. Marcia Fudge was asked.

“He’s emboldened by everything,” she replied. “He’s not a rational person.”