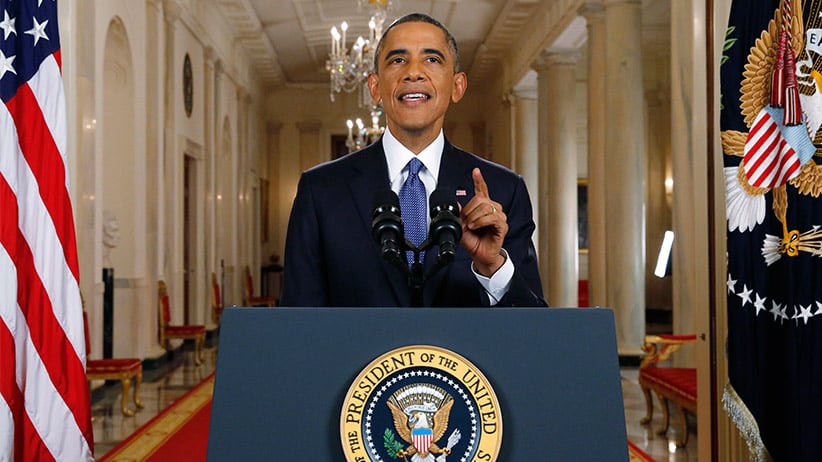 U.S. President Barack Obama would prefer that you not describe his forthcoming executive orders on immigration as an “amnesty.” There are a lot of questions about Obama’s end-run around Congress, but there is no question that in the long run, he is going to lose that semantic battle.

The President’s creation of a new program for an estimated four million illegal-immigrant parents of U.S. citizens and green card holders is sure to be remembered in future as the “Obama amnesty,” just as the 1986 Republican-introduced Immigration and Reform and Control Act is routinely called the “Reagan amnesty.”

And you can bet that, 20 or 30 years from now, there is sure to be a “Chelsea Clinton amnesty” or a “Peyton Manning amnesty.” This is the tragedy of immigration policy in the U.S. The American people have permitted their economy to become structurally dependent on staggering amounts of illegal-immigrant labour, and cynical businessmen who fuel congressional campaigns are always happy to add more of it. The appetite for taking tough, quasi-military measures to re-establish U.S. control over the Mexican border, as president Eisenhower did with 1954’s “Operation Wetback” round-ups, is gone, although the Republican party is certainly seeing early stirrings of the nativist, anti-immigration impulses that gave rise to the U.K. Independence Party (which, last week, won its second consecutive by-election at Westminster).

Everyone, on all sides, recognizes that it is absurd for the United States to have 11.7 million “illegal” residents who are mostly productive and law-abiding. But the main practical concern of the major political parties is to manipulate perception so as to make it the other side’s problem.

Obama’s move to freeze action against immigrant parents of citizens (and extend existing protection to another quarter-million new minor-child immigrants) will give almost half of current “illegals” temporary permission to be present and to work in the U.S. History suggests that the temporary permission will become permanent, even though Obama cannot provide his clientele with full citizenship without action from a now-angry Congress.

The Reagan amnesty did nothing to stop the flow of illegal immigrants across the southern border of the U.S. All it seems to have done, in the absence of genuinely effective measures for the enforcement of immigration law, was to encourage the hope of another future amnesty—a hope now about to be fulfilled. Sneaking across that border and hanging onto a “life in the shadows” is still, it seems, a good deal.

There can be little hope for change. Mexico and the Central American countries are still plagued by relative inequality, corruption and authoritarianism. The temptation for those countries’ brightest and most hard-working people to pursue the American Dream can only worsen their political cultures.

America, if it really wanted to regain border control, would have to divert serious national resources into policing the physical border and, more important, into methods of enforcing existing laws against illegal immigration. This could not be done without universal verification of worker citizenship in the private sector, which would surely function a lot like alcohol prohibition did, combining illiberal horrors of arbitrary and mistaken arrest with an enormous growth of the underground economy.

This means that the Americans are likely to opt for the horrors they already have: misery for the immigrants who remain in the illegal demimonde, lowered wages for low-skill American workers who have to compete with them for jobs, and a continuation of the ever-lengthening American tradition of executive-branch improvisation and increasing presidential power.

It is not certain that Obama’s intended executive orders will be found legal by the courts, but it’s likely, according to constitutional lawyers. (It’s difficult for anyone to even obtain standing to challenge executive activity, unless he or she is, in some clear sense, the target of it, and past presidents have been able to create mini-amnesties by fiat.) Whether or not the President’s measures are legal, they are certainly unprecedented in the size of their effects and their ambition.

In his speech announcing the don’t-call-it-amnesty, Obama explicitly used Congress’s failure to pass the law he wanted as an excuse for going ahead with his own. “I worked with Congress on a comprehensive fix,” he said. “Had the House of Representatives allowed that kind of bill a simple yes-or-no vote, it would have passed with support from both parties.” So he’s going ahead alone.

He may practically be able to do so, and he may even imagine a positive ethical duty to make the system more fair and humane. But it seems neither is in the spirit of the U.S. Constitution, nor an ideal way to make American law.