The elephant in the room

As Obama falters, Republicans are too busy squabbling with one other to notice they’re missing opportunities 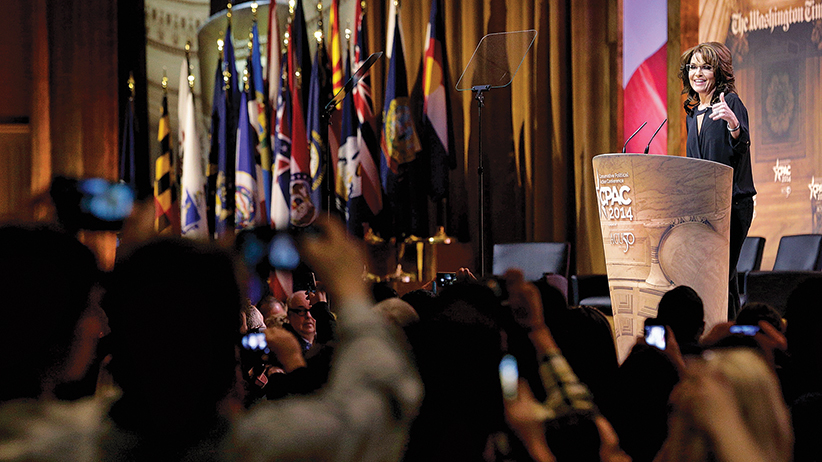 When an estimated 11,000 Republican activists gathered in National Harbor, Md., last week for the annual Conservative Political Action Conference, there were the usual trappings of star-spangled blouses and “I love fossil fuels” T-shirts. The complimentary swag bags came in two colours: red totes promoting the Sportsman Channel’s new series, “Amazing America with Sarah Palin—premieres April 3,” and blue ones from Americans for Tax Reform proclaiming: “The contents of this bag are over-taxed and over-regulated.”

There were conservative celebrities like Donald Trump, Ann Coulter and the former Alaska governor herself performing an anti-Obama rendition of Dr. Seuss’s Green Eggs and Ham (“I do not like this Uncle Sam / I do not like his health care scam”). Palin also combined jabs at NSA surveillance and the first lady’s healthy eating campaign (“You can’t make a phone call without Michelle Obama knowing this is the third time this week you’ve dialled Pizza Hut delivery”). Republican leaders see a year brimming with possibility. Obama’s health care reform has been beset by roll-out problems and low enrollment rates. Foreign policy offers fresh crises and little good news. And the President’s public opinion ratings remain stubbornly upside-down: more Americans disapprove of his job performance than approve (53 per cent to 43 per cent, according to a national CNN poll released last week).

For Republicans, it’s a historic opportunity waiting to be seized by a galvanizing new leader. Republicans are well-positioned to take control of the U.S. Senate, and with it the Washington agenda, by adding a mere six seats to their ranks in the November elections. With both chambers of Congress in hand, Republicans could pass conservative laws—and attempt to roll back some of the President’s policies. But beneath the laughs and the zingers at the conference, the mood was more sober than at past gatherings—and occasionally tinged with bitterness.

While Democrats appear strongly united behind a potential presidential bid by Hillary Clinton (more than 80 per cent want her to run), Republicans are beset by warring factions who can barely hide their disdain for one another. It turns out that the Republicans who were happy to ride the Tea Party express to majority control of the House of Representatives in 2010 are now, after the recent tumultuous months in Congress, finding they’d like to get off the train.

By plunging the federal government into a shutdown last fall, the populist, small-government Tea Party faction, led by Sen. Ted Cruz of Texas, showed their power. But it was the Republican party as a whole that paid a price. The 16-day debacle saw congressional Republicans’ approval ratings plunge to record depths—as low as 12 per cent in some polls—and caused an internal reckoning. When Cruz then pressed for another high-stakes confrontation with Democrats over raising the ceiling on government borrowing in February, House Speaker John Boehner balked.

Boehner allowed the debt ceiling to be raised and Tea Party groups called for the Speaker’s head. Now Tea Partiers are working to unseat various incumbent Republican lawmakers in primary elections in the next few months—including the Republican leader in the Senate, Mitch McConnell of Kentucky. (McConnell came to the conference to shore up his conservative credentials—and even waved a rifle around on stage for good measure. The applause from the conservative legions was tepid.) Some Republicans are concerned that the push by activist groups to nominate hard-right candidates will cost the party seats, as was the case in 2012 when several safe Republican seats were lost by nominees who made controversial comments about rape and other issues. As a result, some business groups are injecting money into supporting more mainstream Republican candidates—against the Tea Party. “I welcome the Tea Party. It gave me confidence in my country because it showed we are capable of rising up. But they support people who are easily caricatured and don’t have a chance of winning,” said Barbara Bowie-Whitman, a retired foreign service officer from Virginia who has been involved in Republican politics for 30 years, and attended the conference. “In the end, the ‘Let’s get elected!’ argument is going to win.”

The divisions mean a lot of time and a lot of money spent on fighting one another, instead of Democrats.

At the conference ballrooms last week, speaker after speaker gave clashing visions for how to proceed. The ideological purists like Cruz insisted that Republicans can’t win without energizing their hard-core supporters around issues such as health care reform or the debt ceiling.

“You want to lose elections? Stand for nothing,” said Cruz, in a confrontational speech that accused past Republican presidential candidates Bob Dole, John McCain, and Mitt Romney of failing to stand on principle. “We put our head down, we stood for nothing, and we got walloped,” Cruz said of the 2012 election loss. (An irritated McCain responded the next day with an icy demand for an apology from Cruz—on behalf of the Second World War hero, Dole. Said McCain: “I wonder if he thinks that Bob Dole stood for principle on that hilltop in Italy when he was so gravely wounded and left part of his body there fighting for our country?”)

Cruz’s defenders were equally harsh. Sarah Palin praised Cruz for leading an “awakening” and heaped scorn on congressional leaders for backing down on the debt ceiling. “Our army balked. We hoped they were just reloading but instead they just retreated and, worse, they joined the lapdogs in the lame-stream to trash the foot soldiers who fought for America.”

Another Tea Party-backed senator, Mike Lee of Utah, declared that, “the Washington establishment can join us, follow us, or get out of the way!” He called on conservatives to get to work on policy for the party: “the new conservative reform agenda.”

Meanwhile, others called for pragmatism. “We’ve got to start talking about what we’re for, not continuing to rail about what we’re against,” said Chris Christie, the New Jersey governor, who was not invited to the conference the previous year in the wake of his embrace of Obama after hurricane Sandy, and his support for some gun-control measures. “Leadership is not standing on the sidelines and spitballing,” said Christie, who derided Washington politicians “who only want to talk” in contrast to governors such as himself “who get things done.”

Aside from divisions over the Tea Party, there was also discord over foreign policy, with hawks calling for a stronger U.S. stance against foes like Vladimir Putin, and libertarians calling for a a more modest U.S. role abroad. Former Pennsylvania senator Rick Santorum blamed the party for catering to the wealthy. “If you’re sitting there underemployed, unemployed … and all we’re talking about is cutting taxes for high-income people, it doesn’t exactly resonate emotionally,” he said. Some conservatives tried to play down the divisions. Paul Ryan, the Wisconsin congressman and Mitt Romney’s presidential running mate, called them “creative tension.” “The way the left tells it, the Republican party is in this big massive civil war. It’s Tea Party versus establishment, libertarians versus social conservatives. There is infighting, conflict, backbiting, discord,” said Ryan. “Look. I’m Irish. That’s my idea of a family reunion,” he said to cheers and applause.

But even once the doors closed on the conference, the backbiting continued. Texas Sen. Rand Paul, a libertarian who won the conference’s presidential straw poll, last week wrote an op-ed for the conservative Breitbart website that appeared to rebuke Cruz. “I will remind anyone who thinks we will win elections by trashing previous Republican nominees or holding oneself out as some paragon in the mould of Reagan, that splintering the party is not the route to victory,” Paul wrote.

Meanwhile, Emily Zarko, a mother from Indiana who voted in the conference straw poll for Santorum, shook her head at the internal discord. “They need to find a compromise,” she said, “and work together.”