The evil Doktor Facebook pleads his case in Washington 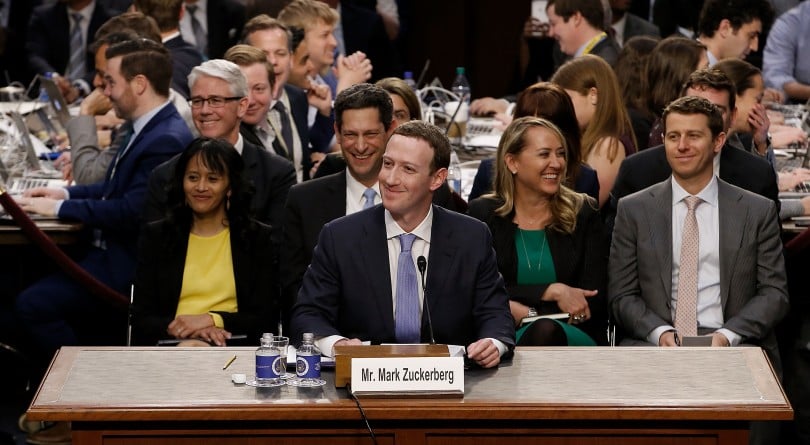 In thrall—as are we all—to the evil Doktor Facebook, villagers of the United States Senate came at him and his two-billion-headed monster with pitchforks and torches Tuesday, then hurried back to their Instagrams and their Status Updates to congratulate themselves on their courage.

Before them was Mark Zuckerberg, teen genius, Harvard dropout, T-shirted billionaire, re-uniter of the long-lost, collator of the like-minded, and now-contrite merchant of our most personal political specifics. As transformative to the 21st century as Edison and Bell were to their times, the founding Frankenstein of social media vowed substantive reforms, but stopped far short of promising never to charge users for the hundred-billion-postings-worth of time they waste in his digital playground every day.

(And even when they’re not online–Zuckerberg admitted that, during the rare hours when a person is not actively using Facebook, the company still knows what he or she is up to. “We can probably correlate activity between sessions,” the witness humbly confessed.)

Members of the Commerce and Judiciary committees—led by senators who grew up in the age of the manual typewriter and the ten-cent phone booth—flailed at the much younger witness, yet failed to significantly rattle him. In fact, Zuckerberg was so shaken, and his transnational empire so destabilized, that Facebook stock rose by only US$7 Tuesday on the NASDAQ exchange.

“If we find that someone improperly used data, we’re going to ban them from Facebook. We must take a more active role in policing the ecosystem,” Zuckerberg promised, one election cycle too late.

READ MORE: Why it’s finally time to crack down on Facebook

Reciting from Gutenberg-era technology—a printed piece of paper—Zuckerberg allowed that the misuse of users’ data during the 2016 presidential campaign “was a big mistake, it was my mistake and I’m sorry.”

Still too young to be President of the United States—he is a year and a month shy of 35–Zuckerberg bragged of taking down tens of thousands of ISIS recruiting and Russian misinformation accounts and assured the legislators that he is “committed to getting this right.”

“Why doesn’t Facebook disclose to its users all the ways the data might be used by Facebook and third parties?” demanded Chuck Grassley, Republican of Iowa, whose Instagram is filled with selfies of the smiling senator and his corn-fed constituents, kicking off the inquisition.

“There’s a control right there about who you’re going to be sharing it with,” the wunderkind schooled him. “If privacy policies are too long, fewer people read it.”

“Will you share with us the name of the hotel where you stayed last night?” asked Dick Durbin, Democrat of Illinois, and Zuckerberg demurred—of course—and this was how Sen. Durbin tried to argue that private matters are and should be private. But how many millions and millions of us are eager to post our merry selves poolside, in the dining room, at the bar?

READ: Mark Zuckerberg didn’t lie to us. We lied to ourselves.

“It comes down to this: Does Facebook consider my personal data to be the company’s data or my data?” asked Bill Nelson, Democrat of Florida, who is being challenged for re-election this year by a Republican billionaire, hence the urgency for the incumbent to appear especially tough. “Are you actually considering making Facebook users pay for you not to use that information?”

(As the hearing began, Senator Nelson’s Facebook home page featured a photo of himself with the same Zuckerberg. Sen. Nelson’s office assured Maclean’s that he is not one of the 30 members of Congress who currently hold Facebook stock.)

“Senators, people have a control on how their information is used in ads in the product today,” Zuckerberg answered. “You can turn off third party information. But what we found is that while some people don’t like ads, people don’t like ads that aren’t relevant. The overwhelming feedback that we get from our community is that people would rather have relevant content there than not.”

“In order to not run ads, we would still need to have some sort of business model.”

“Do you consider my personally identifiable data to be the company’s data?” the electorally imperiled Sen. Nelson thrusted.

“No, Senator,” the witness parried. “The first lines of our terms of service state that you control the information that you put on Facebook.”

“These great web sites that don’t charge for access, they extract data in some other way,” inserted a more sympathetic Orrin Hatch, Republican of Utah, who is retiring after seven six-year terms. “In my mind, the issue here is transparency—do users understand what they are agreeing to when they use a service?”

Hatch reminded Zuckerberg of a vow he made in 2010 that “there will always be a version of Facebook that is free.”

“How do you sustain a business model where users don’t pay for your services?” a quizzical Hatch inquired.

“You don’t have a monopoly?” poked Lindsey Graham, the always-piquant Republican of South Carolina.

Zuckerberg answered: “It certainly doesn’t feel like that to me.” And he promised to assist the parliamentarians in crafting restrictive legislation, the sort of vow that probably was never made by John D. Rockefeller to the great trust-buster Theodore Roosevelt.

(“I believe the power to make money is a gift from God to be developed and used to the best of our ability for the good of mankind,” Rockefeller, the oil and railroad baron and probably the wealthiest human a century before Mark Zuckerberg was born, once said. “I believe it is my duty to make money and still more money and to use the money I make for the good of my fellow man according to the dictates of my conscience.” This, in essence, was little different from what Mark Zuckerberg told Congress.)

In the balance on Tuesday, as the session continued and more senators primped for their re-election videos, was nothing less than the existence of the American republic itself, though this was not a new theme.

“The first truth,” Franklin Delano Roosevelt had said eight decades earlier, “is that the liberty of a democracy is not safe if the people tolerate the growth of private power to a point where it becomes stronger than their democratic state itself. That, in its essence, is Fascism—ownership of Government by an individual, by a group, or by any other controlling private power.”

“Believe me, I was benevolent; my soul glowed with love and humanity; but am I not alone, miserably alone?” Frankenstein’s creature wailed in Mary Shelley’s novel in 1818.

“Facebook is an idealistic and optimistic company focused on all the good that connecting people can do,” Mark Zuckerberg told the U.S. Senate in 2018.

“You have a 14-year history for apologizing,” accused John Thune, Republican of South Dakota. “Why is today’s apology different?”

“I think it’s impossible to start a company in your dorm room and have it grow to the size it is now without making mistakes,” Zuckerberg replied.

READ: Facebook can claim its very busy man in Ottawa is not a lobbyist. Here’s how.

‘How much have any of us read the terms of service for the social media that we use?” wondered John Cornyn, Republican of Texas. “They are written by lawyers for legal purposes, which is basically to prevent lawsuits against the company. An apology is not enough.”

“I’m tired to being lied to,” an American University student named Annamarie Rienzi was saying in the corridor outside the hearing room, where a block-long queue of attendees began to congregate six hours before the hearing began. Rienzi was one of numerous spectators wearing T-shirts that said #DeleteFacebook, though she hadn’t deleted Facebook, at least not yet.

“If he can honestly say that he’s not selling any of our data, then I might stay with it,” said Rienzi, who noted that she once accrued more than 400 “likes” when she posted her thoughts on being an adoptee.

“I’m a user,” she confessed. “I use it every day. But I wish it would be what it was in the beginning,” the collegian said. “A public forum to share the happy moments of our lives.”

Hostages to the public sharing of our happiness, two billion Facebookers waited for the hearing to end so that they could post that they had seen it. “We’ve seen these apology tours before,” Richard Blumenthal, Democrat of Connecticut sneered, but he already has been re-elected.

“How much money does it take to make a man happy?” asked John D. Rockefeller, a century ago. “Just one more dollar.”

“I started Facebook, I run it, and I’m responsible for what happens here,” countered Doktor Facebook. “Advertisers and developers will never take priority over connecting people as long as I’m running the company.”