The face of women in the age of Donald Trump

Image of the week: Four U.S. congresswomen have got the best of the U.S. president, and their reaction to his racist tweets says it all 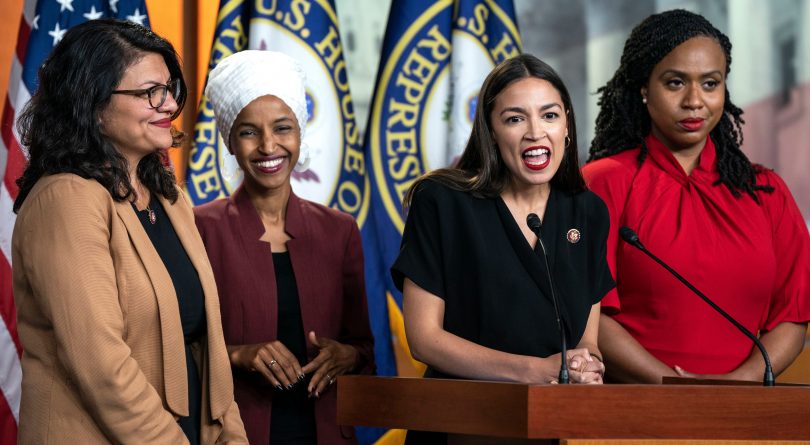 (from left) Democratic Representatives Tlaib, Omar, Ocasio-Cortez and Pressley speak about Trump's Twitter attacks against them in the U.S. Capitol on July 15, 2019 (Jim Lo Scalzo/EPA-EFE/Shutterstock)

U.S. President Donald Trump loves watching his tweets soar into cyberspace. At a social media summit he hosted at the White House last week—to which he invited several conspiratorial far-right figures, including one who called Barack Obama a “skinny ghetto crackhead”—Trump talked up his tweets to an appreciative crowd. “I used to watch it. It would be like a rocket ship when I put out a beauty,” he said. “Remember I said somebody was spying on me? That thing was like a rocket.” This past Sunday, he launched another one, this time taunting four Democratic congresswomen of colour—Rashida Tlaib, Ilhan Omar, Alexandria Ocasio-Cortez and Ayanna Pressley, pictured above—to “go back and help fix the totally broken and crime infested places from which they came.” While hashtags #TrumpIsARacist and #RacistInChief trended around the globe, the four women in question defended themselves in a lively press conference. Tight-lipped restraint, broad smile, angry yell, unimpressed smirk: the four distinct facial expressions tell a story of womanhood in the age of Donald Trump. Two days after the president’s tweets, the Democrat-led House voted to condemn his racist comments, which doesn’t change much, but did cause him to double down on his call for them to leave the country, confusing their dislike of him with a dislike for America. Sooner or later, these rockets will come to a crashing end.