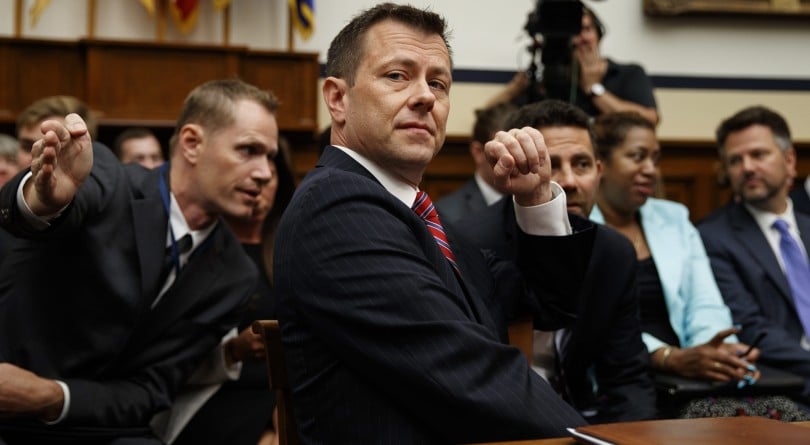 Declaring an inquisition by the House of Representatives to be “just another victory notch in Putin’s belt”—which assumes that Vladimir Putin actually wears a belt and does not simply command his trousers not to fall down—FBI “lover boy” Peter Strzok dodged beanball after beanball Thursday at a congressional hearing called to find out whether such subtle tweets as “F— Trump” might be interpreted to suggest that he may not be a strong admirer of the current president of the United States.

“Let me be clear,” Strzok told more than three dozen members of Congress, as if his online activity hadn’t been clear enough. “Not once in my 26 years of defending my nation did my personal opinions impact any official action I took …  It is not who I am and it is not something I would ever do. There is simply no evidence of bias in my official actions.”

Still, Strzok admitted, his late-night texts may have been “blunt” and “hyperbolic”—they included such impartial reflections as “Trump is a disaster” and “We’ll stop it” and “Hillary should win, one hundred million to zero”—and he allowed that they may have “created confusion and caused pain for people I love.” This batting order may or may not still include Ms. Lisa Page, the government lawyer with whom he exchanged late-night anti-Trump indelicacies and who did not show up for her own congressional inquisition the day before.

Slender, bald-spotted, defiant, and at times seeming to be enjoying himself in the crosshairs of posturing Republicans, mewling Democrats and perspiring photographers squatting at his feet, the FBI’s former deputy assistant director of counter-intelligence insisted that he had been texting as a private citizen about then-candidate Trump’s “horrible, disgusting behaviour,” and not as the lead investigator into both Putinite interference in the 2016 presidential election and Clinton’s private email server. (Special investigator Robert Mueller struck out Strzok as soon as his anti-Trump birdseed hit the fan.)

“There is no room for personal belief in any investigation,” Strzok insisted in Congress, while J. Edgar Hoover twirled in his tomb (in a pink chiffon dress by Oscar de la Renta with matching arrest-me pumps.)

“Many people may have doubts and not believe that,” he later demurred.

“Do you recognize how your vitriol makes it look like you could never approach these cases in an unbiased manner?” asked Rep. Bob Goodlatte, Republican of over-educated northern Virginia.

“Of course I do,” said Peter Strzok.

Mr. Goodlatte then reminded the witness about a tweet that stated that he had visited a Walmart store in benighted southern Virginia, where, Strzok wrote, he could “SMELL the Trump support.”

“What does Trump support smell like, Mr. Strzok?” the lawmaker wondered.

“Sir, that was a quick choice of words at the time,” the lover boy shrugged.

“Certain private messages of mine have provided ammunition for misguided attacks on the FBI, an institution I love deeply,” testified Peter Strzok.

“Imagine if this had been said about Obama,” countered the committee chairman.

Strzok had spent 11 hours being roasted by the same solons in a closed-door session last month. With the cameras rolling, Thursday’s open hearing, a joint enterprise of the bitterly-divided House judiciary and oversight committees, provided superb theatre, with most of the first hour taken up by such slapstick as:

“Counsel of the FBI has directed me not to answer any questions about the ongoing investigations.”

“The gentleman’s point of order is not well taken!”

“You are under subpoena!”

“I am here voluntarily!”

“You can either comply … or be placed at risk of a contempt citation and possible criminal prosecution.”

“The point of order is not well taken!”

“You don’t know what the point of order is!”

“Mister chairman, I move to adjourn!”

“You are not recognized!”

“And the chairman is not being proper!”

“The chairman IS being proper!”

“We’re just gonna make up rules as we go along?”

Then it got even worse.

“I can’t help but wonder when I see you there looking with a little smirk, how many times did you look so innocent into your wife’s eyes and lie to her about Lisa Page,” sneered Louie Gohmert, Republican of Texas.

“The fact you would accuse me otherwise, the fact you would question whether or not that was the sort of look I would engage in with a family member who I have acknowledged hurting, goes more to a discussion about your character and what you stand for and what’s going inside you,” said Strzok.

It was a level of farce to put a smile on the face of Trump himself, who by then had taken a break from dynamiting the Atlantic alliance—in advance of his upcoming canoodle with V. V. Putin—to tweet: “How can the Rigged Witch Hunt proceed when it was started, influenced and worked on, for an extended period of time, by former FBI Agent/Lover Peter Strzok? Read his hate filled and totally biased Emails and the answer is clear!”

RELATED: How Stormy Daniels is closing the credibility gap for women

And just as this kindergarten rumpus was ramping up in Washington, where the Major League Baseball all-star game will be played next week, word arrived from Columbus, Ohio that Stormy Daniels, the noted thespian, had been taken into police custody after she allowed a patron to touch her person while she was performing at a Buckeye State honky-tonk. (On Thursday, charges against her were dropped.)

The alleged toucher, it should be noted, could not possibly have been Trump. While Stormy was doing a perp walk in stilettos in Columbus, the president was in London, taking tea with our gracious Queen with dozens of witnesses present.

Ohio law states that only members of an exotic dancer’s immediate family are permitted to touch her or him during a performance. It also requires nude public performances to end at twelve o’clock midnight. The statute was upheld in 2011 by the 6th U.S. Circuit Court of Appeals, which ruled that it did not deny a club owner’s right to free expression.

Just as sacred, said Peter Strzok on Thursday in the halls of Congress, was his own right to curse the president of the United States and the odours of the Americans who love him, even while heading the investigation against him.

“I don’t agree with your characterization of my views as biased,” the lover insisted to one Republican accuser. “I believe that all my personal opinions were never taken into account in all the actions I took at the FBI. Sir, I completely disagree with you.”