The firestorm awaiting Christopher Wray as FBI director under Trump

At a Congressional hearing room on Wednesday Donald Trump's pick to head the FBI repeatedly pledged his loyalty to the U.S. constitution 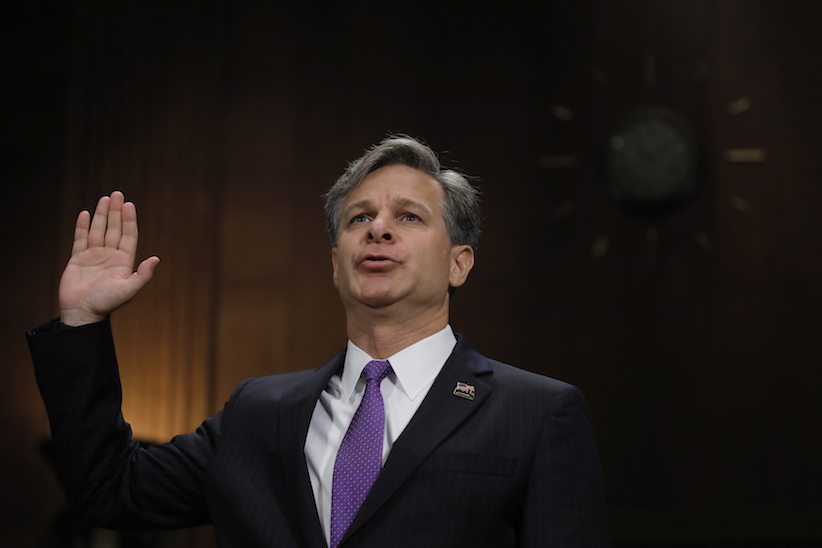 Christopher Wray is sworn in prior to testifying before a Senate Judiciary Committee confirmation hearing on his nomination to be the next FBI director on Capitol Hill in Washington, U.S., July 12, 2017. REUTERS/Carlos Barria – RTX3B599

Not all boys are born a Trump or a Kushner but all men are their fathers’ sons.

At a Washington fire house on Tuesday, a young man named Davon McRae worked his first day on the job. The engine he rode to his first call—a minor auto accident in a downtown tunnel —was named for his dad, and there was a plaque in the stationhouse with his father’s name on it as well.

The father, Kevin, was 44 when a blaze broke out on the ninth floor of a D.C. high-rise two years ago this March. He hurtled up the stairs to help evacuate residents; returning to the street, that winter night, his heart gave out and he died.

So that was one father and son in the news in Washington this week, a heart-tugger on an inside page in the American capital.

The Trumps, of course, pére et fils were splashed up front in ink and pixels, in the newspapers and in your Facebook feed—the son obliterating a year of his own and his father’s fibs with a single phrase: “I love it.”

At that same now-infamous meeting with a Russian lawyer who had been advertised as a courier for the Kremlin’s counter-Clinton machinery, Donald Trump Jr. had been joined by Jared Kushner. Together, the two scions eagerly held out a bucket to be filled with cyber-hacked night-soil; together, they walked away crestfallen, having wasted a third of a precious hour.

Draw, now, a circle. When Jared Kushner’s father, Charles, a Trump-ish rental-flat tycoon, pleaded guilty in 2005 to eighteen counts of illegal campaign contributions, witness tampering and tax evasion and was sentenced to two years in prison, the U.S. attorney who led the case against him was Chris Christie, later the governor of New Jersey.

In 2013, when Chris Christie was implicated in the “Bridgegate” scandal—the approach lanes to a bridge to Manhattan were fiendishly blocked off, creating traffic chaos to embarrass a local mayor—the lawyer who successfully defended him (no charges were filed) was a former George W. Bush Administration official named Christopher Asher Wray. And of course it was Chris Christie who briefly led the Trump presidential transition team last fall before being abruptly fired.

At a Congressional hearing room on Wednesday morning—it was a tiny cell compared to the formal amphitheatres where James Comey and Jeff Sessions testified a few weeks ago—Christopher Asher Wray, 50, faced senators’ questions as part of the process of his confirmation to be Donald Trump, Sr.’s second director of the Federal Bureau of Investigation.

You may recall that the first director—a “nut job,” in The Donald’s words, named James Comey—was fired in May because of “the Russia thing.”

So once again, the business of the people’s legislators was being diverted from such ancillary matters as health insurance, ballistic-missile defence, tax reform, counter-terrorism, opiate addiction, and the unrelenting “American carnage” being suffered and perpetrated in appalling numbers this summer by young men of colour in cities across the country—despite Donald Trump’s asinine assertion at his inauguration that these killing would “end now.” A dozen senators were spending yet another morning and afternoon trying to find someone—anyone—who might serve the state with unequivocal honesty and integrity in these incomprehensible days.

“How do you feel?” Maclean’s asked Cecil Wray.

“How about the father and son in the White House?” a reporter flippantly inquired.

“No comment!” laughed Wray the senior, his round face agleam.

From the dais, Sen. Ben Sasse labelled Chris Wray’s interrogation “the proctology exam,” but in truth, it was not an intrusive procedure, as these things go. Up front were the usual inquisitors, famous now from the James Comey and Jeff Sessions and Neil Gorsuch tribunals:  Grassley, Feinstein, Hatch, Cornyn, Graham, Franken, Lee, Kennedy, Coons, Durbin, Leahy, Klobuchar, and Tillis of North Carolina chugging down a bottle of Mountain Dew.

READ MORE: The investigation into Donald Trump and Russia: FAQ

Chuck Grassley of Nebraska said that the head of the FBI needs to be someone who will display “calmness under significant pressure and a very level head.” Dianne Feinstein of California rehashed the unlovely dismissal of James Comey, which occurred, she noted, “because he would not pledge his loyalty to the president and he would not lift the cloud of the Russia inquiry”

“I believe to my core that there’s only one right way to do this job—by the book, playing it straight, faithful to the constitution without fear and without favoritism,” Wray responded. “I have way, way, way too much respect and affection for the men and women of the FBI to do anything less than that.”

“Anybody who thinks I will pull punches as the FBI director sure doesn’t know me very well,” said Christopher Asher Wray.

“This is going to be an interesting life, but I’m not sure it’s going to be a nice life,” said ancient Orrin Hatch of Utah. And this may prove true, should special investigator Robert Mueller’s fatal finger of felony point directly to the fulminating father of Donald Trump, Jr. and the formal impeachment of a president proceeds for the third time in 230 years.

“From what we’ve seen from the White House, they may be expecting your loyalty,” predicted Patrick Leahy of Vermont.

“My loyalty is to the constitution, to the rule of law, and to the mission of the FBI,” said Wray.

Patrick Leahy asked what Chris Wray would do should Donald Trump demand that he pledge his fealty, as he had tried to do with big Jim Comey.

“I would try to talk him out of it and if that failed, I would resign,” said Chris Wray.

Lindsay Graham, always good for a quip, tried to get Chris Wray to cast aspersions on the Junior-Jared-Russian meeting of last June, but the nominee had the gall to claim that he hadn’t had time to read the papers.

“Do you believe this endeavour is a witch hunt?” pressed the irreverent South Carolinian.

“I don’t consider Director Mueller to be on a witch hunt,” Wray replied.

“Do you agree that this is one of the most contentious times in the history of American politics?”

“It’s certainly up there.”

“I got you,” said Lindsay Graham. “That’s the right answer.”

This went on for five hours, the now-familiar roundelay of pointed questions and polished answers that has swallowed the American government and will not spit it back out again until a new president is chosen in 2020, or the current one is returned despite everything.

“I foresee a firestorm brewing,” predicted Sen. Blumenthal of Connecticut in the understatement of the day. Across town, in a city of fallen fathers and striving sons, a rookie aboard Engine 6 was ready to answer the call.