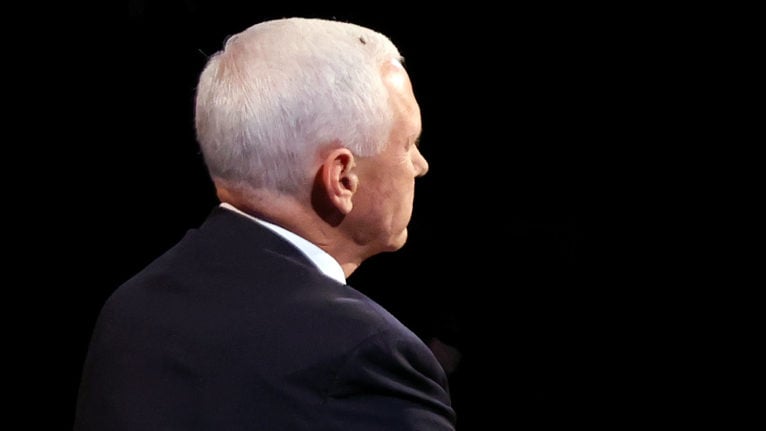 From top: the fly and Mike Pence (Justin Sullivan/Getty Images)

There was only one clear winner to the vice presidential debate between Senator Kamala Harris and Vice President Mike Pence.

The true victor—the only entity on stage whose reputation remained untainted by the evening’s events—was the fly that graced the top of Pence’s head in the debate’s home stretch.

For a good couple of minutes, minutes that felt like hours, the fly found a new home. An unmoving, hair-sprayed haven, unshaken by the movements of the man below it. A refuge far less shaken than the moderator as she attempted to enforce the rules. A pure-white playground from which to observe American democracy up close.

Unlike either candidate, the fly couldn’t care less about the cameras capturing its every movement, or what impression it would make on voters, or the umpteen Twitter accounts opened in its name within the first few seconds of its appearance.

To answer my own question… pic.twitter.com/zY6RYqXgoH

The insect didn’t care if it distracted you just as Harris was hitting her stride during a segment on systemic racism in America. It didn’t care how many jokes you were about to make about Pence’s fly in the presence of a woman who was not his wife. It was pure chance that this petty fly landed on a white guy. Flies are for equal opportunity.

Even at the nation’s highest-security venue, in a building virus-proofed to the nines, a little reminder of nature—that any human may at any time find that their person is a landing spot for a fly—managed to sneak in and find a resting place amid the chaos.

So let us pay homage to the undisputed star of the show, whose presence brought something special to each and every one of us.

For every debate watcher who has wondered aloud about being a fly on the wall of Donald Trump’s White House, this tiny hero was there.

For each Democrat who needed a choice metaphor to bring to the Zoom water cooler on Thursday morning, there this little bug was.

For conspiracy theorists needing to believe that some tiny, extremely lifelike drone was on site to either assist or sabotage the vice president—despite Pence apparently never registering its presence—behold, some “evidence.”

For every viewer needing a moment of absurdity upon thinking, an hour in, that actually this debate was pretty run-of-the-mill and civil? Our miniscule agent of entropy had you covered.

For all those who had been clenching their teeth throughout the experience, aching to be given an opportunity to relax their jaws and adjust their posture, our friend gave them a golden opportunity to straighten up, lean forward, squint towards their screens, jostle their partners and break the living room silence with: “Wait … look! Is that …?”

For the fans of whataboutism, the fly brought about an excuse to point out a viral video of Barack Obama noticing and killing a fly mid-interview in 2011.

And for all the puritanical naysayers telling us all to shut up already about the fly and get back to the very real issues facing American democracy, don’t call in the swat teams. Congratulations: The fly has provided you with a new catalyst to emphasize civility in political discourse. You should really thank it.

The fly needed no introduction. It needed no recognition. It launched no interruptions. It told no lies. It stayed above the fray, literally and figuratively. The fly represents us all. It is us all. It is—or at least was, during the brief seconds before Twitter got involved—the purest character in American politics today.