Jeh Johnson on the threat from Islamic State

The U.S. Secretary of Homeland Security on domestic risks, counter-terrorism, and the Canada-U.S. border 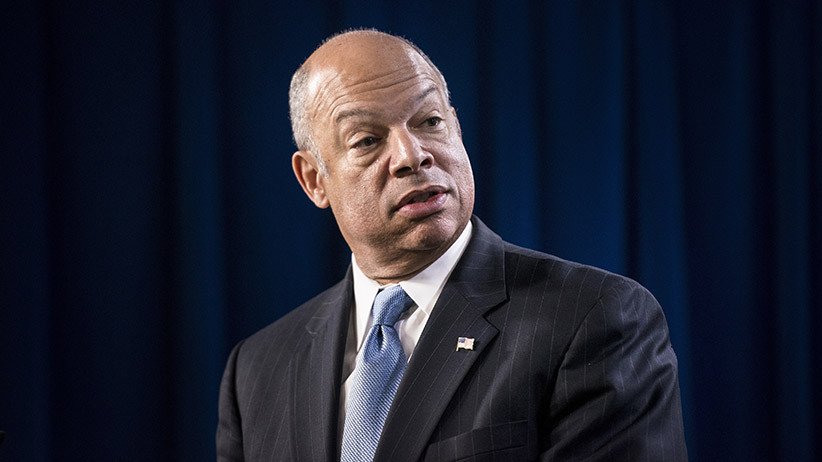 As U.S. secretary of homeland security, Jeh Johnson is in charge of protecting the U.S. from terrorist attacks. He was appointed last December. His sprawling department covers customs and immigration, emergency response, aviation safety, nuclear detection, and more. In President Barack Obama’s first term, Johnson was the top lawyer at the Pentagon. He was in Ottawa recently to discuss Islamic State, counterterrorism, and the Canada-U.S. border.

Q: How big is the domestic threat from Islamic State?

A: We are seeing an evolution in the terrorist threat. 9/11 represented a terrorist organization that had a very simple command and control structure. Now that a lot of core al-Qaeda members have been killed or captured, we see al-Qaeda affiliates—adherents and groups that even core al-Qaeda has renounced—now on the world stage. In addition, we are concerned about foreign fighters leaving our home countries, going to Syria, and returning with an extremist mission. I know from my discussions with ministers in Canada that they are concerned about this, too. And we are concerned about people from countries from which we do not require a visa in our visa-waiver program—individuals from those countries who have been to Syria, leaving those countries and coming to our country. Additionally, we are concerned about the social media issued by [Islamic State], the propaganda, the attempts at recruitment without personally interacting with somebody. That’s one of the reasons why I am a big proponent of our “countering violent extremism” initiatives in this department—where we go to community groups.

Q: Canadians don’t need visas to enter the U.S., but there have been some proposals in Congress to require visas for people from countries who have citizens fighting with Islamic State. What do you think about that?

A: I think our visa-waiver program is extremely valuable. It is important to our economy. I think there are other ways through which we can track individuals who travel through visa-waiver countries and we’ve been in conversation with our friends and allies to improve upon the information-sharing. I think that the UN Security Council Resolution passed that encourages information-sharing concerning foreign fighters will go a long way also.

Q: So, Canadians don’t need to worry that the U.S. will impose visas on Canada?

A: There is no consideration being given to insisting on visas for countries from which we currently don’t require visas.

Q: Now that Canada has joined the military operation against Islamic State, are we at greater risk domestically of terror attacks from the terrorists abroad?

A: Any time you take the fight to a terrorist organization, we have to be vigilant about the potential for retaliatory attacks. That’s not an excuse, that’s not a reason to do nothing. This is an organization that has to be stopped. I do think that the Canadian people as well as the American people should be vigilant about potential threats from terrorist organizations. And I say that not just about [Islamic State]. What I have said in this country is that for the time being, we continue to need homeland security in our daily lives: at airports, large public gatherings, other places of transport, because the terrorist threat to our countries still exists. We have to understand it, we have to understand how it evolves, and we have to be prepared to do what is necessary.

Q: What are Canadians getting into here? Is this a war? A counterterrorism operation?

Q: The opinion polls in the U.S. are showing that the public is more concerned now about a potential terrorist strike than at any time since 9/11. What implications does that threat and fear have for the border?

A: We are moving toward a risk-based strategy of border security, as we are on aviation security and other types of homeland security measures. That involves use of technology, sophisticated surveillance, and just smart, effective, efficient use of resources.

Q: Will there be any changes at the border?

A: We are always evaluating and building on the strategy that we have.

Q: You’ve said no one would want a 100 per cent risk-free flight. Can you explain?

A: I could guarantee you a risk-free flight: no one would be wearing any clothes, have any carry-on luggage, no food, no utensils, and no one would be allowed to get up and leave their seat. That would be an extremely unpleasant flight. No one would want to buy that ticket. This is something that I appreciate now that I didn’t fully appreciate before I came to office. Homeland Security means striking a balance between basic security and preserving the freedom to travel, to associate, and preserving the values we have in this country and that I believe Canadians also have: we cherish diversity, we cherish our immigrant heritage, we cherish privacy, our civil liberties. And we are not a people who are afraid and hide. Every morning I read in the daily intelligence briefs about a whole bunch of threat streams, and you have to sort it out—the noise from what might be real and credible and specific—and not overreact. If we overreact, then we could achieve a risk-free environment, whether it’s an airplane, an airport, a building, a city—but the experience would be so unpleasant I don’t think anyone would want to go there.

Q: After your department was created in the wake of 9/11, there was a lot of concern in Canada that this was a department focused on security, and it was dealing with our border and trade relationship. Do you see the economy in any way as a part of your mandate?

A: Part of my mission is promoting lawful trade and travel. Commerce between our two countries passes through ports of entry that are regulated by my department. It’s not simply securing our borders. After 9/11 there was an attitude here to pull the drawbridges up, but we’ve come a long way from that. I think the Beyond the Border initiative has a lot to do with it.

Q: One of the aspects of Beyond the Border is work toward pre-clearance at the land border.

Q: Republican Sen. John McCain recently referred to the Canadian border as “porous” and expressed concern that terrorists could come over that border.

A: I would not characterize our border as porous. I would characterize it this way: we’ve put an unprecedented amount of resources on border security by way of people, technology, equipment, vehicles, aircraft, boats. Overall, apprehensions, which are an indicator of total attempts to cross the border, have gone down considerably over our entire border, and the population of undocumented immigrants has stopped growing for the first time since the 1970s.

Q: You’ve also said you want to see more information-sharing between the two countries at the border. What kind of information?

A: We would like to have a system in place to make it easier for an exporter or importer to “register once and be counted twice”—a single portal process where the information provided to one government is good for the other. That just promotes lawful trade and travel. There is also information-sharing in terms of individuals of suspicion who may be travelling from one country to the other, or through one country to another place. But our principal efforts on information-sharing are devoted to promoting lawful trade and travel.

A: This project is important to both our countries. I have personally seen the site for the new bridge, for our new customs plaza. I am committed to seeing us make progress. We are in active discussions right now and I think our discussions are heading in a positive direction.

Q: What did you think of Ottawa?

A: It was my first official trip there. Our ambassador, Bruce Heyman, and I had just met with the Prime Minister, and it was a beautiful day. So we kept walking and walking.We saw the beautiful downtown including the cookie shop near the U.S. Embassy where President Obama visited shortly after he became President, which has 25 or 30 photographs of him. So I was obliged to buy a lot of Obama cookies.