The 'Ivanka Show'—and Canada's role in it

Anne Kingston: Canada can take a bow for enabling the president's daughter's rise under the vague, feel-good mantle of  'women’s empowerment.' 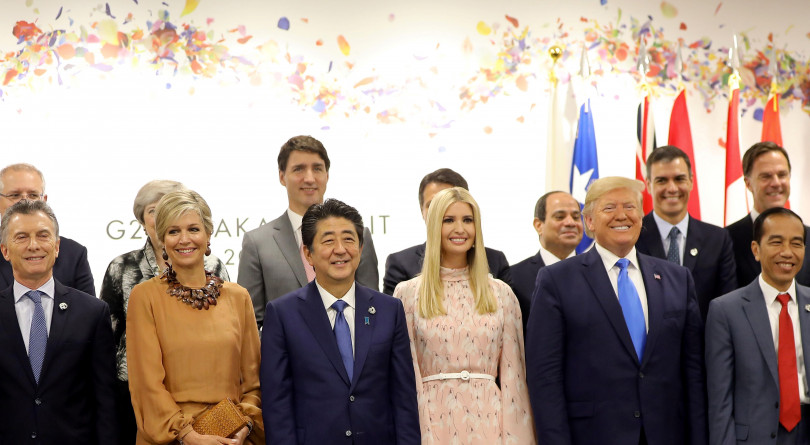 Advisor to the U.S. President Ivanka Trump alongside world leaders at an event on the sidelines of the G20 Summit in Osaka on June 29, 2019. (Dominique Jacovides/AFP/Getty Images)

Prime Minister Trudeau’s first visit to Washington in February 2017 to meet newly-installed President Trump yielded a photograph Ivanka Trump posted on her Instagram. In it, the president’s then 35-year-old daughter and senior advisor is playing president, sitting behind her father’s desk in the Oval Office, flanked by her father and Trudeau. At the time, I wrote about the preposterous pic, calling it “chilling” for what it potentially foreshadowed: a compliant PM unable to say “No” to the narcissistic, nepotistic leader of Canada’s largest trading partner;  Trudeau, a master of political optics himself, lending imprimatur to Trump’s dynastic, undemocratic, hereditary succession plan.

After Ivanka’s scene-stealing swanning with world leaders recently at the G20, a brazen intermingling of business and politics now intrinsic to the Trump brand, her ascension, while still absurd, is closer to reality. The titles of World Bank head or U.S. Ambassador to United Nations have seriously been floated. That’s not the main prize for a never-elected Upper East Side Princess with a BA from Wharton said to aspire to the presidency. Now it has even been rumoured she’ll replace Pence as her father’s running mate, and ultimately the first female president. Such reports could be totally spurious, of course, or intended to make it less shocking when it happens.

Canada can take a bow for enabling the president’s daughter’s rise under the vague, feel-good mantle of  ‘women’s empowerment,’  a journey that began with her perch next to Trudeau in the White House’s Cabinet room in 2017, presiding over the first meeting of a newly formed “United States-Canada Council for the Advancement of Women Business Leaders-Female Entrepreneurs.” Ten female CEOs and business leaders—five from each country—were hastily gathered to work on solving decades’ old gender imbalances in business and to figure out how to encourage female entrepreneurship. They’d “level the playing field for this generation and for the next,” Ivanka promised.

Successful ladies corralled to help their sisters enter the C-suite provided brilliant veneer to gloss over more contentious issues between the two countries—refugee claimants fleeing the U.S., the Muslim ban, upcoming NAFTA negotiations. The council provided politically-correct cover for a president known to insult, assault and objectify women, whose whose first executive order was to cut aid “ to any foreign-based organization that performs, promotes or offers information on abortion,” a policy known to put women’s lives at risk. It burnished the Trudeau government’s “feminist” agenda. And it gave Ivanka an unassailable debut as a White House policymaker at the very moment major retailers were dropping her eponymous, now defunct label.  The council’s mission dovetailed nicely with her brand’s #WomenWhoWork slogan and her then-upcoming book,  Women Who Work: Rewriting the Rules for Success, a comical title given its author rode in a limo to school and had been employed by her father since 2005.

The council’s formation provided political mileage even before its second meeting. Trump crowed about it repeatedly, including at his first State of the Union address. Finance Minister Bill Morneau cited the council in his 2017 budget, months before any findings were released.

By then, the sight of Ivanka sitting in on meetings with world and business leaders, including Japanese president Shinzō Abe and German Chancellor Angela Merkel, had become routine. By April 2017, she was subbing for dad at the G20 women’s conference in Berlin, alongside Merkel and IMF head Christine Lagarde. “I grew up in a house where there were no barriers to what I could accomplish,” she told the crowd, apparently unaware of the irony. In July 2017,  she championed Women Entrepreneurs Finance Initiative,  a billion-dollar World Bank initiative to advance women’s entrepreneurship funded in part by Canada and Saudi Arabia.

Ivanka Trump’s role on the political stage mirrored the one she played on the business side where she appeared in Trump property billboards: a photogenic, marketable front for the less savoury practices in which she herself was embroiled — from the family’s business dealings in Azerbaijan to the sketchy now-dissolved Trump Foundation, in which she, her father and brother are named in a lawsuit claiming improprieties.

Ivanka, not her dim, endangered-animal-hunting brothers,  has long been positioned as the future of the Trump brand. She was present on the campaign trail more than her step-mother, Melania. At the Republican convention, she introduced her father as a “feminist.”

Ivanka’s  relationship with her father is known to veer into creepy, a dynamic that now extends to him flagrantly flouting the federal anti-nepotism law, which prohibits public officials from hiring family members to work in agencies or offices they oversee. (As she’s not officially a senior advisor, she skirts ethic rules.) Trump also defied senior aides’ recommendations as he bulldozed through security clearances for her and her husband, Jared Kushner, tasked with fixing the Middle East.

Within Trumpworld where one is told black is white, and up is down, Ivanka, polished to the point of anodyne fembot, makes perfect sense. The former Democrat and mother of three identifies as progressive, feminist, someone worried about human trafficking, even if  her corporate practices and policy contributions suggest otherwise. She  provides more proof that grift does not fall far from the Trump tree. As her father called to “Buy American and Hire American” in his January inauguration speech, more than 53.5 metric tons of Chinese goods in “Ivanka Trump”-branded shoes, bags, and clothing were in transit to the U.S.  Her company has been accused of multiple claims of  trade dress infringement, or copying other shoe designs, cases quietly settled in 2017. In November 2017, three months after Ivanka Trump said she was stepping away from her company, citing official government responsibilities, China granted initial approval for 16 new trademarks, including one for “voting machines.”

Trump’s eldest daughter offers another 2-for 1: softening Trump’s thuggery while literally reinforcing Trump as patriarch, an image writ large during the recent Trump family junket to London to hobnob with that other royal family. She’s able to deliver the simulacrum of human, seen in a July 2018 C-SPAN interview when she claimed to be “very vehemently against family separation and the separation of parents and children” at the Mexican-U.S. border. Those words mean nothing, as children remain separated, living in horrific conditions. At the height of the separation crisis in 2018, Ivanka infamously shared pictures of her happy toddlers, a choice that was cruel, out-of-touch or both.

The out-of-touch, entitled side prevailed at the G20 in Osaka. In an unprecedented move for a non-official, Ivanka gave read-outs of trilateral meetings. Her cringe-making attempt to insert herself in a conversation with world leaders as an equal, mischievously released by the French presidential palace’s Instagram account, became the only thing most people remember from the summit.

Certainly it deflected from Trump buddying up to despots—mockingly telling Vladimir Putin not to interfere in American elections and getting rid of journalists; calling Saudi crown prince Mohammad bin Salman, the  brutal dictator  who ordered the kidnapping, torture, and dismemberment of Washington Post journalist Jamal Khashoggi,  “a friend of mine” who has done “a spectacular job.”

Less noticed was Ivanka’s boilerplate, yet telling four-minute address, observed by Trudeau from the second row. She touted her father, freshly accused by yet another women of rape, as an active agent of women’s empowerment. She played moral scold: “every nation…can and should do more,” she said, noting that countries that “empower women” have less military conflict just as her father was planning his hardware-studded July 4th military parade. She ended saying she was looking forward to working with Saudi Arabia, a country known for its atrocious human rights violations against women.

Ivanka was given central place in the G20 class picture, between Abe and her father. Her flouncy pink daughter-wife dress stood in stark contrast to the sea of dark suits inhabited by men; notably, only two women present were world leaders. Ivanka’s tie to the group was less political than business: she has trademarks registered in 18 of the G20 countries, including China, France, Germany, India, Indonesia, Italy, Japan, Mexico, Russia, Turkey, UK, Australia, Brazil, Canada and Saudi Arabia.

The image also offered a reminder of how the presidency has been a kleptocratic profit bonanza for the Trumps. Donald Trump reported some $2.3 billion in income since his presidential run. Kusher and Ivanka Trump, who receive no White House salary, reported some $135 million in 2018 income, including Ivanka’s stake in her family’s Washington DC hotel a stone’s throw from the White House that netted her $3.95 million. (The popular gathering spot for foreign diplomats and lobbyists is at the centre of two federal lawsuits claiming Trump is violating the Constitution’s ban on foreign government payments to the president.)

Ivanka’s ‘women’s empowerment’ crusade offers another insulating benefit, seen in the response to criticism of her at the G20 by White House Deputy Director of Communications Jessica Ditto: “It is sad but not shocking that the haters choose to attack Ivanka Trump, a senior adviser to the president, when she is promoting U.S. efforts to empower women through strategic partnerships with world leaders.”

Now that Ivanka is mingling on the world stage, that little bilateral council appears an afterthought.  The initiative wound down last October after producing five short reports with bullet-pointed advice and a boatload of political currency. Initially billed as a  “ground-breaking bilateral initiative,” the council is now framed as a government-formed  “independent” group supported by the Business Council of Canada among others by PMO spokesperson Eleanore Catenaro. Its website was registered in October 2017 not to a government but to Accenture Global Services Limited, parent to the consulting giant; Julie Sweet, CEO of North America Accenture was a council co-chair. Communications, initially handled by the PMO were managed by Accenture and Loblaw Companies,  a “pro bono” partner.

Of course, the Canadian government is already primed to support gender equality. Catenaro credits the council, which produced its first report in January 2018, with measures in the 2018 budget, including the “Women’s Entrepreneurship Strategy” which includes $2-billion in new financing over the next three years.

There is no evidence the White House, or Ivanka Trump, even acknowledged the findings. (Inquiries to the White House went unanswered.) That’s consistent. Months after Trump took office, the White House Council on Women and Girls created by President Obama in 2009 to monitor the impact of policy changes and liaise with women’s groups went dark.

The bilateral council served its purpose politically. That was obvious in South Korea, where Ivanka also holds trademarks. The president invited his daughter to join Secretary of State Mike Pompeo on stage at Osan Air Base, calling them “beauty and the beast.” Ivanka again focused on women, this time how they play “an enormous role in enabling” peace and prosperity in the peninsula. She and Kusher then accompanied dad to a historic meeting at the DMZ with North Korean ruler Kim Jong-un. It was family only; national security adviser John Bolton was absent. The first daughter’s assessment of entering North Korea: “Surreal,” a word that pretty much sums up the Trump regime.

But “surreal” isn’t the word to focus on here: “She’s going to steal the show,” Trump said gleefully when introducing his offspring in South Korea. Right now everyone’s obsessed with the Ivanka “show.” But the focus should be on “steal.” And suddenly that Instagram pic and ‘women’s empowerment’ take on eerie new resonance.